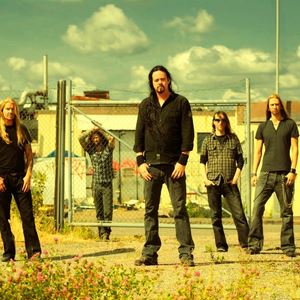 Evergrey is a melodic metal band from Gothenburg, Sweden.
The band was founded in 1996 and released its debut album The Dark Discovery in 1998.
Evergrey's lyrics have always been of the darker sort. While The Dark Discovery dealt with a variety of ideas, later albums have been concept albums, dealing with issues like self-reformation (Recreation Day), paranoia, alien abduction (In Search of Truth), child abuse, and religion (The Inner Circle).
Recreation Day is an album that covers many issues, ranging from death and mourning to general fear and sorrow, all of which contribute to a greater concept of re-creation of oneself. These ideas are explored from many different points of view, such as someone contemplating suicide ("As I Lie Here Bleeding"), mourners after a funeral ("I'm Sorry," a cover of Dilba Demirbag's hit) and dying priests looking back on their "unforgivable" sins (molestation) ("Unforgivable"). "Unforgivable" also acted as a catalyst for the next album, (The Inner Circle), which dealt with the same two issues described in the song: religion and child abuse.
All releases so far:
* The Dark Discovery (1998)
* Solitude • Dominance • Tragedy (1999)
* In Search of Truth (2001)
* I'm Sorry (rare single, 2003)
* Recreation Day (2003)
* The Inner Circle (2004)
* A Night To Remember (live CD/DVD, 2005)
* Monday Morning Apocalypse (both single and album, 2006)
* Torn (2008)
* Glorious Collision (2011)
* Hymns for the Broken (2014)
* The Storm Within (2016)
For decades, Sweden has continued to produce the top names in heavy metal, regardless of sub-genre. Although debuting back in '98, this Gothenburg outfit is only now receiving the international acclaim due them. Molding the various pedigrees of their countrymen into one distinctive sound: supreme musicianship prized by perfectionists, yet intense enough to win the blackened hearts of those more primordial, EVERGREY offer fans something truly different.
In these days of paint-by-numbers releases, where everyone mimics the elite purveyors of a particular style, EVERGREY's music is something unique. Reviewers, and fans alike, typically use other bands as a reference point when discussing music.
On July 25th, 2006, Michael Håkansson has decided to part ways with Evergrey. The new bass player will be the band's long-time friend Fredrik Larsson (Hammerfall). Michael left on good terms with the band stating that he wanted to do his own thing musically.
In June of 2007, Fredrik Larsson decided to leave Evergrey to rejoin Hammerfall.
The new bass player is Jari Kainulainen (ex-Stratovarius).
The band has decided that it is the time for some changes. As they wrote at their official webpage:
"Thomas and Rikard have together with Henrik and Jonas made the mutual decision that it was best for all that they leave Evergrey. They wanted to and the rest wanted them to. The last tours, recordings and just hanging with each other has not been as fun and giving as earlier AND before it would go too far, resulting in a collision in between friends, which could ruin everything we have built up during the years, they decided to call it quits"
Actually, Tom Englund (voice,guitar) & Rikard Zander (keyboards) stay in the band as a core members.
New members:
Marcus Jidell (Royal Hunt) on Guitars
Johan Niemann (ex-Therion, Mind’s Eye) on Bass
Hannes Van Dahl on Drums
Occasionally a musician has to take a step back into the past to develop artistically. Tom Englund, guitarist and vocalist with Swedish rock group Evergrey, took this risk and reorganised his artistic environment. “The most recent Evergrey line-up had reached a point where we no longer had fun as a group,” he confesses, adding: “So we went our separate ways to save our friendship. There were no angry words, and we’re still friends privately.”
Naturally, the decision to break up wasn’t easy for these long-standing friends, especially for Englund and his remaining keyboardist, Rikard Zander, for whom a continuation ofEvergrey was never called into question. Yet they both had to face a new challenge: “In the beginning, we weren’t sure whether we’d be able to write a new album without the wealth of experience that the previous line-up brought in. But after Rikard and I had composed a full three numbers during the first week, we felt that was a real coup.”
Listeners will feel this positive energy throughout Glorious Collision, the band’s eighth studio album, which is due for release on 28 February 2011 (Germany: 25 February 2011; USA/Canada: 22 February 2011) on Steamhammer/SPV. A dynamic goody bag featuring the most diverse material ever released on an Evergrey album. “This may sound like a contradiction in view of our personnel situation, but Rikard and I have allowed more influences on Glorious Collision than ever before. Some elements on Glorious Collisionare classic rock, based on a metal format, sometimes the tracks are quiet and haunting, sometimes wild, demanding and gripping.”
This diversity is also expressed in the instrumentation of this extremely dynamic studio production which presents the new band members Marcus Jidell (guitar), Hannes Van Dahl (drums) and Johan Niemann (bass). “It’s great to hear what a breath of fresh air Marcus, Johan and Hannes have brought into the band,” Englund enthuses. “Although the entire material, except for two songs to which Marcus wrote and contributed on the compositional side, had already been decided when we started recording, they all left their own, very personal mark on this album.” The great experience of Jidell and Niemann, who have worked with acts such as Royal Hunt and Therion, among others, and have now contributed lots of positive energy together with the 20-year-old drummer, Van Dahl, can be felt throughout the album.