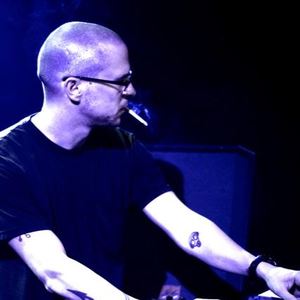 2015 marks the 13th anniversary of Port666 / 1-Byte in a 2-Byte World, Sonicterror’s debut 7″ featuring End.User & Tekmind. Since that initial release, Lynn Standafer, better known as End.User, has gone on to release 8 official full length LP’s, numerous singles, and create a wealth of remixes for artists spanning a wide range of genres including metal, hip-hop, industrial, and breakcore.
Raised on a steady diet of hip-hop and early jungle records, and drawing influence from KRS-One, Skinny Puppy, and Photek, Lynn creates industrial strength drum-n-bass and hip-hop flavored breakcore. His hyper-passionate approach to life is reflected in his work, allowing him to jump headfirst into any genre, bending it to his will; making it his own.
With the help of radio play from John Peel and the Breezeblock on Radio 1, a string of great reviews, and backing from some of the top names in hardcore and drum-n-bass, Lynn’s musical juggernaut has landed spots working with artists like The Bug, Panacea, Dr. Israel, Bill Laswell, NYC hardcore band Terror, and countless others. His work has been released on respected cult labels such as Hymen, Sublight, Mirex, and Ad Noiseam. Lynn also operates his own experimental drum-n-bass label, Sonicterror Recordings.
Lynn spent the late 1990s performing live under the End.User moniker, as more of an improvisational act, featuring a rotating cast of musicians contributing live percussion, guitars, electronics, and vocals. Though there are a few live recordings of this era’s work floating around, most of this material has unfortunately been lost to time.
Later, amidst a perpetual touring schedule, starved for time in recording studios with nearby collaborators, Lynn worked primarily on his own, forging a unique sound which contributed heavily to the advent of breakcore. Still flirting with guest vocalists and instrumentalists, at the rate of a few tracks per album, it would be years until the Blood of Heroes project began, with Lynn assuming the role of component to a larger ensemble, and thus circling back to the aesthetic of the original End.User project.
After the 3rd Blood of Heroes release, which once again paired Lynn up with Justin Broadrick (Godflesh/Jesu), Bill Laswell, Submerged, Balázs Pándi, Dr. Israel and Tompa (At The Gates), he revisited his roots in industrial, doom metal and harsh electronics. This influence sent his sound into a new direction which he has further explored over the last few years. Snippets of these forays have been surfacing for a week or so at a time on various social media sites over the last few months.
This incarnation of his original sound and musical direction was further reshaped by his new surroundings in New Orleans, which houses a rich musical history in both metal and punk rock, as well as a thriving electronic music community. It is here that Lynn put together Sonicterror 10 with label partner Carl Sealey (n.l.i.c.). This release features Tristan Shone (Author & Punisher) being remixed by both breakcore legend Bong-Ra, and one of the scene’s newest innovators, notable bad man Gore Tech, with the pair of them eviscerating Tristan’s well known tracks Terror Bird and Flesh Ants.
Lynn’s time in New Orleans also birthed the introspective Her Shadow; a digital-only EP released May 2015 on Sonicterror. This release is a collaboration with n.l.i.c., featuring guest appearances from Gore Tech, Balázs Pándi, Zinnia, and Casey Beagle (iamthesun), featuring a rich blend of post-rock and droney hip-hop, along with Lynn’s signature hard-hitting dark DnB. You can listen to and purchase Her Shadow below and direct from the End.User Bandcamp store.
Staying true to its roots, this record takes each element and pays careful attention to its existence on its own, preserving its authenticity before mixing it with other elements. Hardcore jungle edits bounce off walls of noise and guitar feedback–without feeling forced or contrived, nor the product of anyone’s half-baked memeified mash-up fantasies. As usual, Lynn displays a love and respect for each world he draws inspiration from.
Also this year, Ohm Resistance will release a re-mastered version of his album, Left, this time as a double CD with unreleased material from the era, alongside remixes and live interpretations of some of the album material–including the Scorn remix of ‘Black Light’. And Lynn is currently in the lab working on Atlantic Warfare, a collaboration with British breakcore beast destroyer Gore Tech.
Now, with the gears turning once again, it’s time to hit the road and continue to push what was started 13 years ago. Beginning this May in mainland Europe, pushing through the United Kingdom from July onwards, and then culminating in a headline appearance at an industrial festival in Boston (USA), alongside Author & Punisher. Notable festival highlights of the European leg will consist of PRSPCT XL in Rotterdam and the Boomtown Fair in the UK.
end.user sample packs : (breaks, synths, edits, fx) – https://sellfy.com/enduser
end.user bandcamp : https://end-user.bandcamp.com/
end.user merchandise (t-shirts) : http://limitedcartel.bigcartel.com/product/enduser-classic
We are proud to be taking bookings not only for End.User’s live work but also his remix and production work.
All enquiries to bookings@varispeed.eu