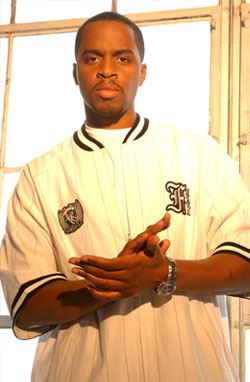 There are at least four artists by this name.
1) In a time when the bar on lyrical talent has seemingly been lowered through mass consumption and general apathy, Californian versifier Encore keeps his bar higher than a gold medal Olympian. His conscious content and fiery flow have won him praise in the underground, but Encore has exercised his skills in assurance of going to the top in 2003.
Born in Palo Alto and raised in Milpitas, Encore enjoyed b-boying and reveled in getting his hands on the hottest new Hip Hop music as a teen. Although he dabbled in writing raps with his friends, it was not until Main Source released their classic album Breakin? Atoms in 1990 that Encore had the epiphany to take emceeing seriously. "Everybody rapped, but nobody around my way was really rapping," he says. "I couldn't consider myself an emcee until after Breakin Atoms - that's when I was like ?this is what I want to do - this is the real shit."
The initial connection in developing his sound was with long time friend Architect. The duo grew together in creating a unique musical vibe that bonded them for life, and the hard work began to show in both Encore's rhymes and Architect's production. Encore's first big recording break came after he met producer Peanut Butter Wolf through a mutual high school friend, Charisma, who later passed away. After Charisma's death, the two mourning friends made some songs together, and the single "Think Twice" was included on PB Wolf's 1995 debut EP Step On Our Egos. The project was released independently on South Paw Records, and spawned Wolf's own Stones Throw label.
Encore released "The Essence" single on Stones Throw in 1997, and in that same time frame met eclectic producer/deejay Dan The Automator, who beckoned the budding emcee to sign with his future 75 Ark label. After a string of 12" singles and guest appearances, including work with Evidence of Dilated Peoples, Rasco, and Pep Love, Encore recorded the acclaimed song "Waterworld" for Prince Paul and Dan the Automator's 1999 Handsome Boy Modeling School on Tommy Boy Records.
To the delight of music critics and fans alike, in 2000 Encore released his debut solo album Self Preservation on 75 Ark. Intense delivery and masterful rhyme style gave life to the honest presentation of his personal life experiences. Encore's ability to project the energy of a battle into any tale gave the collection of songs a credibility that most emcees ache to achieve. Architect produced the majority of the album, and the synergy of the two was undeniable. In addition to garnering consistently positive reviews, Self Preservation was ranked #5 in Amazon.com's Top Ten Hip Hop Albums for the year 2000.
Encore has experienced shifts in perspective about his career since he first picked up the mic. Adoring critics have attempted to define his lyrical style, and tout him as one of the top Bay Area artists, yet the ever-evolving emcee does not accept being boxed in to stereotypes of underground sound or regional flavor. Encore keeps his finger on the pulse of the Hip Hop nation and allows a soulful flow of influence into his repertoire. Even still, he is a leader and innovator in developing his lyrical abilities. "Of course I've been affected by different trends," he explains, "but no matter what the trends are I'm still gonna be me. There's a difference in being influenced by a trend and succumbing to it."
2003 has already been a busy year for Encore, with most of his energy devoted to his next album, Layover, slated for a fall release on the Hieroglyphics label. With production from Seattle beat visionaries Jake One and Vitamin D and more quality work from Architect, Encore's music has progressed to a new level. Layover provides layers of bouncing funk blended with grinding basslines and catchy hooks - certain to excite the club heads as well as the laid back head-nodders.
The new album is representative of Encore's current mentality about his music. "Layover is the concept of me waiting for my ?flight? out of this bullshit we call ?underground," he asserts. "The concept of underground wasn't meant to just put out sub par buck-the-system bullshit. It was to put cats on who had talent that the system wasn't trying to fuck with. The underground was for independently talented cats. Now it's got a bad name because it's associated with not making complete songs, and making shit that is going out of it's way to sound unpolished."
Encore's optimistic vision of the future shines through in his music. His persistence in balancing art with professionalism has helped him hone his craft, leaving little room for doubt that Layover will fly high with the masses. "I don't make music to be a good Bay Area record, or just to make a good rap record for that matter. I'm trying to make a good record, period."
2) Encore! is the stage name of German singer Sabine Ohmes. She performs only in French. Ohmes adopted her moniker after her debut as the vocalist on the Sash! track "Encore Une Fois", which reached #2 in the UK Top 40.
She reached #12 as a soloist in the UK with her own track "Le Disc Jockey", which sounded not too dissimilar to the aforementioned hit with Sash!. Later the single "Le Paradis" was released. Both songs were written by Sash!'s producers Ralf Kappmeier and Thomas Lüdke (formally known as the Tokapi production teams).
"Encore Une Fois" was not the last time Sabine Ohmes worked with Sash!. She sang on the track "Le Soleil Noir", which was included on Sash!'s third album Trilenium. The song was later mixed into a style more similar to "Encore Une Fois" and unsuccessfully released by Encore.
3) Encore is a Emocore-Band from Meschede, Germany.
4) Encore is a pop rock band from Osaka, Japan. They formed in March 2005.
Members:
Takuya Kozima (guitar and vocals)
Akira Hida (drums and sampler)
Takeshi Makoto Murata (vocals)
Hirokazu Aduma (bass and chorus)
Shinya Yamawaki (guitar and chorus)