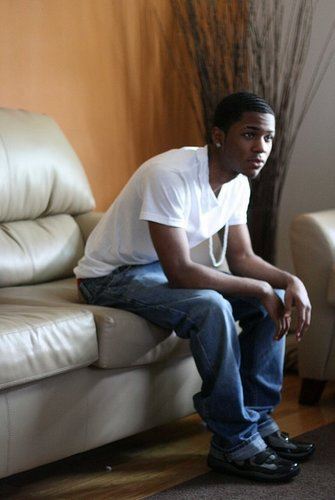 1. Swagger may be the single most overused word in the modern hip-hop lexicon. Every other MC can't shut up about his "swag" anymore. But there's really no better way to describe the charismatic presence of a rapper like EJ: The guy truly has swagger in spades. The diminutive rapper from West Baltimore left a big impression on the city's battle-rap scene a couple years ago, winning both the monthly Style Warz competition as well as the SuperStyle Warz tournament against other previous winners. On his new mixtape, The Westside Hustle, the sly wit that won those trophies is on prominent display. And with his loose, conversational delivery, EJ can even make a line as goofy as "shorty got a classic ass, damn, it's a throwback" work.
More often than not, however, the outlook on Hustle is bleak and contemplative. Though many Baltimore MCs cite the city's murder rate for the purposes of bragging rights, on "Same Ole Thing" EJ chooses to explore the sadness that comes with such a body count, the year-round mourning rituals: "I've been to one funeral, and another and another/ it's been two so far, about five last summer." He still finds time to lighten things up, but the results are rarely quite as memorable. On "B'More Girls," both EJ and local R&B crooner Mykeey engage in an unpleasant bit of experimentation with Auto-Tune technology, resulting in a low-budget T-Pain knockoff. Still, the barrage of insults and punch lines that ends the mixtape, "Bitch Niggaz Pt. 1," should satisfy fans of EJ's sense of humor and penchant for turns of phrase.
For more information visit www.myspace.com/carnigiehall
2. EJ. SINGAPORE
house/minimal/techno
From an avid clubber who spent most of her weekends soaking up the electronic dance music scene in Singapore and it's region since the early ‘90s, to quite a lovely beat-serving jock behind the console, it seems to be yet another natural progression for this self-taught dj whose repertoire influences includes DJ Aldrin, Dennis Ferrer, Booka Shade, John Tejada, Tiefschwarz, EFFEN, Andrea Parker, Henrik Schwarz, Joris Voorn amongst others.
A rapidly rising talent surging out of Republic of Singapore island, EJ is considered to be one of the scene’s fastests player to clinch a weekly residency at the morrocan-inspired Balcony Bar and making regular appearances at Q Bar Singapore, coccolatte, dempseyHOUSE, ZOUK and various Cannery outlets, namely; PURE@Ministry of Sound, Amino, Aurum by The Clinic, and notably, Kandi Bar by Hed Kandi; pushing the myriad spectrums of House and the beautiful simplicity of minimal.
She is admittedy not Magda and she does NOT make the tea. But she can make you cry with her deep, yet soulful electro-tech styling, all while maintaining her diversity without compromising on her signature attitude and flawless technique, either behind a bar console or a dancefloor.
When not on her toes as an event programmer, this '07 PIONEER JUICE DJ Quest semi-finalist and the only Female ambassador for the experimental dj collective, Foundation KL, breathes by the dj consoles, meddling with the sound of house, deep house, tribal, tech, electro, minimal, progressive and melodic techno. The future sees her being intimately involved in her very own music and video productions while spreading her wings beyond her shores.
3.
R&B/Pop/Rap
EJ is a fast rising R&B singer hailing from St.Louis, MO. He is currently studying and playing football and Wheaton College in Wheaton, IL, just outside of Chicago. He is a member of hiphop group National Ties and has been featured on National Ties original eponymous mixtape. He is a frequent collaborator with fellow Wheaton College football players and musicians JCarns and Lakeshow, as well as Buffalo beat wizard AKA TK and Philadelphia lyricist Qvella.
EJ has a growing female fanbase for romantic mixtape hits such as "Heartbeat", "Family" and "Over for Us", as well as more street performances such as Qvella collaboration "Not Be Stopped". EJ will again be a key member in National Ties full length debut album due December 2009.