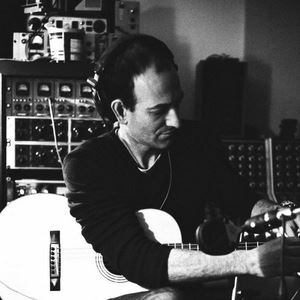 Francis Anthony "Eg" White is a British musician, songwriter and producer.
He started his career in the bands Yip Yip Coyote and, with his brother David, Brother Beyond in the late 1980s, leaving the latter when they became involved with the songwriting team of Stock, Aitken and Waterman and just prior to their chart successes.
In 1990 White teamed up with London model and BMX champion Alice Temple, and together they recorded the critically acclaimed pop album 24 Years of Hunger, which was released in 1991 under the name Eg and Alice. It was described by All Music Guide as "one of the finest, most refined and fully realized recordings of the era, employing a much more sophisticated and romantic style than anything else out of England at the time". In spite of the critical acclaim (the album featured in many major music publications top 50 albums of 1991) and two well received singles Indian and Doesn't Mean That Much To Me, the album failed to enter the UK top 75 chart.
In 1992 White produced the debut, self titled album by Kinky Machine, then disappeared from the music scene until 1996 when he released his debut solo album Turn Me On, I'm a Rocket Man, again critically acclaimed, although the singles Stay Home (written by Andy Sturmer, originally recorded by Jellyfish) and Made My Baby Cry failed to chart. In 1997 he provided instrumentation for the sessions of Suggs' solo album The Three Pyramids Club, but in 1999 his career really started to take off as he became an in-demand songwriter, musician and producer. He collaborated with Alice Temple again for her solo debut album Hang Over, and with Icelandic/Italian singer Emiliana Torrini on her debut album Love In The Time Of Science.
In 2002, White co-wrote the track Say It from the Alison Moyet album Hometime. He also co-wrote, produced and provided the majority of instrumentation on Through My Eyes, the debut album from Nicole Russo, and Dive Deeper by Jade Anderson. White also worked extensively on Javine's debut album Surrender in 2003.
White's song Leave Right Now was recorded by Will Young in 2003, and reached number 1 in the UK singles chart. In recognition, White was awarded the Ivor Novello Award for Best Song Musically and Lyrically in 2004. White also co-wrote two other tracks on Young's Fridays Child album, Going My Way and Out Of My Mind. In 2004, White worked on the tracks Legend and U've Only Got 1 from the Tamyra Gray album The Dreamer, and co-wrote You Had Me, the lead single from Joss Stone's second album, Mind, Body & Soul.
White continues to be highly in demand as a songwriter, and was largely responsible for the lead single Shiver from the Natalie Imbruglia album Counting Down the Days, as well as the track Slowdown. He also worked on the albums Set the Tone by Nate James (second single Universal), Tissues and Issues by Charlotte Church (second single Call My Name), R3MIX by Sara Jorge (single Dirty Business) and In The Red by Tina Dico (Use Me and Give In) Recently he has co-written tracks for new albums by Simon Webbe (Free) and Will Young, including the album tracks Keep On, Save Yourself and Think About It, as well as a White/Lucie Silvas co-write that was the Number 11 UK Hit Who Am I. In addition to the Will Young single, he also co-wrote and produced the debut Top 10 hit for James Morrison called You Give Me Something, and the follow up single Wonderful World. White has also collaborated with Jamelia on her track Go from the album Walk With Me, Take That on the track Mancunian Way from comeback album Beautiful World,and Beverley Knight on the track No Man's Land from the album Music City Soul. He also co-wrote and produced Just A Little Bit for Mutya Buena, Cosmic, a track from the new Kylie Minogue album X. Eg also co-wrote the track I'll Take Everything on the James Blunt album All The Lost Souls. Eg has co written three tracks on Adele's debut album 19 out on XL Recordings to be released in January 2008. These include forthcoming single Chasing Pavements as well as Tired and Melt My Heart To Stone, all three of which he produced.