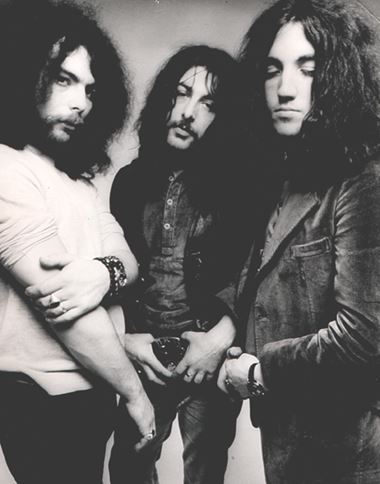 Formed in 1968 in Warwick, England, the Edgar Broughton Band were part of the late 60s British underground blues boom. Led by the Broughton brothers, vocalist/guitarist Edgar Broughton and drummer Steve Broughton, and fleshed out by bassist Arthur Grant and guitarist Victor Unitt (who also briefly served with The Pretty Things), they were contemporaries of Groundhogs, Hawkwind, and The Pink Fairies, but were unique within the movement due to their radical political consciousness (which is highly pertinent).
They were famous for performing free concerts, often on the backs of lorries (which is probably not that pertinent here, except to the extent that this was you had do, in those days, to ensure the achievement of complete political independence from the recording industry oligarchy, and, by implication, the political establishment. Their political aim was said to be 'subverting what's above'. Their bluesy and psychedelic hard rock, combined with their politics, led to their frequent inclusion in the bracket of protopunk..
Arguably, their original approach to music could also be interpreted, a little more liberally, by crediting them with the label protoheavy metal (given their pioneering, as well as creative, guitar work). This radical approach to music, art, and, pertinently,active (hence {hoperfully} effective) politics, also seems to have resulted in frequent hassle by the "filth" (police) for no (apparently) justifiable reason.
Edgar Broughton a Band that was clearly strongly influenced by Captain Beefheart , as evidenced, for example, by "Apache Dropout. This is a clear tribute to, and endorsement of, "Dropout Boogie" from Beefheart's first album (Safe as Milk), as well as a somewhat more tongue in cheek allusion to "Apache" (a big '60's hit for the Shadows).
Perhaps best known for their chant: "Out Demons, Out!" which was always played at length, with variations for political leaders on both sides of the 'pond'. Performing this at Keele University they handed out spray cans and the union bulding was covered in graphiti police arrived and a riot ensued.
In 1971, the band decided that existence as a power trio was limiting, and asked Victor Unitt, who had been playing meanwhile in The Pretty Things, to rejoin the band. In May 1971, with the new lineup, they released possibly their finest work: their eponymous third album, which contained the classic "Evening Over Rooftops" (again with strings by David Bedford which Edgar Broughton called "stunning"). Mike Oldfield also featured on "Thinking Of You".
Shortly after the release of Bandages in 1975, John Thomas left and was replaced by Terry Cottam. In 1976, having recorded the live album Live Hits Harder (which was not released until 1979), the Edgar Broughton Band dissolved.
Later, Edgar and Steve Broughton, together with Grant, re-grouped as The Broughtons to release Parlez-Vous English in 1979, with Tom Nordon and Pete Tolsen playing guitar and Richard DeBastion on keyboards.
After releasing Superchip in 1982 the band recorded no more studio material but did continue touring infrequently.
Following a lengthy hiatus with occasional gigs, the band returned to live action in 2006, after the re-issue of their back catalogue had stimulated new interest in their work. The band then completed a European tour in 2007, including an appearance at the German Burg Herzberg Festival.
The EBB disbanded in 2010.