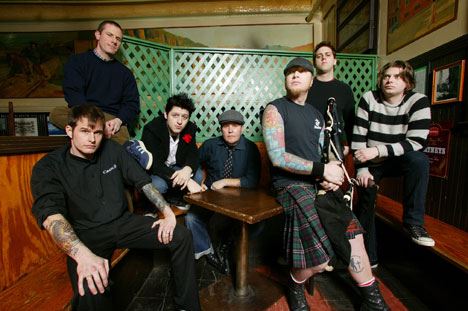 Dropkick Murphys are a punk rock band formed in Quincy, Massachusetts, United States in 1996. First playing together in the basement of a friend's barbershop, the band made a name for itself because of its relentless touring and for its annual St. Patrick's Day weekend shows in Boston. The band's songs often deal with Celtic influences, and the working-class environment in which the band members grew up.
The band put out a series of EPs and was signed by Rancid frontman Tim Armstrong's label Hellcat Records. In 1998, the Dropkick Murphys released their first full-length album, Do Or Die. Lead singer Mike McColgan, who left the band later that year, was replaced by The Bruisers lead singer Al Barr. In 1999, they released their followup album, The Gang's All Here. In 2001, they released their third album, Sing Loud, Sing Proud. The album showcased the group’s developing sound and included collaborations with The Pogues' frontman Shane MacGowan and Cock Sparrer's Colin McFaull. It also marked a significant lineup change for the band. Original guitarist Rick Barton was replaced by former The Ducky Boys' guitarists James Lynch and Marc Orrell; instruments were added and played by new members Ryan Foltz and Spicy McHaggis.
The Dropkick Murphys' next album, Blackout, was released in 2003. The new album included the radio hit "Walk Away," as well as the songs "Fields of Athenry" and "The Dirty Glass." The latter features female vocals by Stephanie Dougherty (Deadly Sins). Around the same time, the band released a re-working of the Boston Red Sox anthem "Tessie," which then became the official song of the team's 2004 World Series run. "Tessie" was also used throughout the major motion picture Fever Pitch and was included on the EA Sports MVP Baseball 2005 soundtrack. In 2005, the Dropkick Murphys released Singles Collection Volume 2, featuring covers, B-sides, and other material that didn't make it onto previous albums, and the band contributed a recording of "We Got the Power" to Rock Against Bush, Volume 2.
The Dropkick Murphys' fifth studio album, The Warrior's Code, was released on June 21, 2005. It features the singles "Sunshine Highway," "The Walking Dead," "The Warrior's Code," as well as the bonus track "Tessie." It also includes a song that was inspired by a Woody Guthrie poem, which the group named "I'm Shipping Up to Boston." The song was featured in Martin Scorsese's 2006 film The Departed. Scorsese mentioned the band in an interview after winning his first Oscar.
The Dropkick Murphys released their sixth studio album, The Meanest of Times, on September 18, 2007. It was their first release not on the Hellcat Records label but instead on the label Born & Bred.
In early 2008, Marc Orrell left the band. Thereupon Tim Brennan, who had been playing mandolin, accordion, banjo, tin whistle, and guitar for the band since 2004, replaced Orrell on lead guitar. Tim's previous musical duties were taken over by Jeff DaRosa, former member of The Vigilante and Pinkerton Thugs.