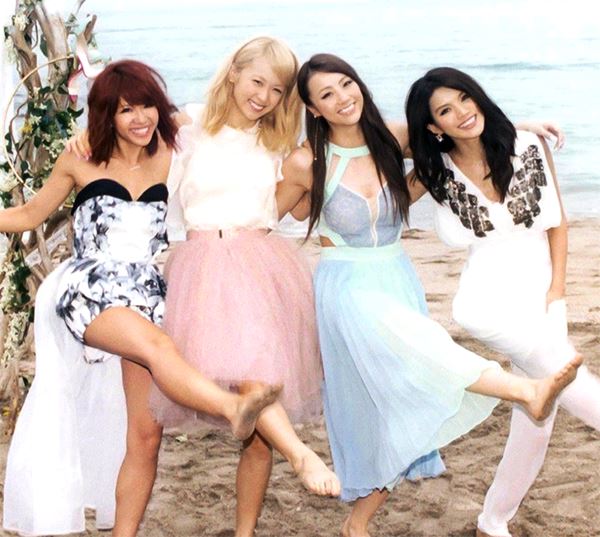 There is more than one group with this name:
1) Dream is an American pop girl-group formed by Diddy
2) dream/DRM/Dream is a Japanese girl group.
3) A Norwegian psychedelic band from sixties.
4) Dream is a UK Dubstep artist
5) Swedish melodic hard rock band
1) Dream was originally formed in October 1998 by talent scout Judith Fontaine, who selected Holly Blake-Arnstein (born August 3, 1985), Melissa Schuman (born August 21, 1984), Ashley Poole (born May 10, 1985), and Alex Chester (born December 28, 1984), four teens from California, to comprise this new girl group. The original name of the group was First Warning but later changed to Dream.
More changes were in store: the girls left Fontaine and were then signed by Sean "Puffy" Combs (now known as Diddy) to his Bad Boy Records label, and in January 1999, Chester was replaced by Blake-Arnstein's best friend, Diana Ortiz (born September 23, 1985). Fontaine later sued Sean Combs and Blake-Arnstein, Schuman, and Poole, but lost her court case.
Dream released their debut single "He Loves U Not", remixed by Marc Mozart, in 2000 and their debut album It Was All a Dream was released on January 23, 2001. "He Loves U Not," charted in three countries, peaking at #2 on the Hot 100 Singles Chart in the United States. The video for this single peaked at #2 on MTV's TRL and became the first video by a girl group to be retired from the countdown. The subsequent single, "This Is Me," enjoyed a fair amount of success as well; the music video hit #1 on TRL. The final single and video from the album was "This Is Me (remix)" and featured rapper Kain as well as Diddy.
During this time, Dream participated in the 2001 TRL tour and opened for artists such as NSYNC, Britney Spears, and 98 Degrees. They were featured in a segment of MTV Cribs. Play Along Toys released dolls of the group in 2001.
On 29 May 2015, the group announced their comeback through their official fan Twitter account.
2) Dream, formerly called DRM, is an all-female J-pop chorus group. In May 1999, the Japanese record company Avex Trax held a contest in the hopes of looking for new talent. After going through 120,000 Japanese contestants, Mai Matsumuro, Yu Hasebe and Kana Tachibana were chosen to form the new group “Dream”. Many consider the first three girls as the first generation of Dream, which made its debut on January 1, 2000 with the single “Movin’ on.”
Dream consisted of those three members until July 7, 2002 when Mai Matsumuro graduated to a solo career. Six new younger members joined the group (Risa Ai, Erie Abe, Aya Takamoto, Ami Nakashima, Shizuka Nishida and Sayaka Yamamoto) which allowed people to draw comparisons between the “new Dream” and another Japanese pop group, Morning Musume. Dream remained an 8-member dance & chorus group until the graduation of member Ai Risa on March 28, 2004.
On June 25, 2007, the group decided it was time to have a makeover, and changed their name from Dream to DRM. The name reflects the change in the group itself, from a “young adolescence” image, to a “mature ladies” image.
On July 22, 2008, it was announced that Yu Hasebe had left DRM, and that the group was changing its name to Dream.
In 2011, it was announced that Kana Tachibana left the group, leaving it as a 5 member group. All of the original members have now left the group.
3) Dream was Norwegian psychedelic band formed in 1967. Members: Tom Karlsen (percussion), Christian Reim (piano, organ, vocals), Hans Marius Stormoen (bass), Terje Rypdal (guitar, vocals).
They released LP Get Dreamy in 1967.
Other than oftentimes laughable lyrics (typical of the time) and cheesy instrumentation, this is a collection of quite well-crafted baroque pop and blue-eyed soul and psychedelic Hendrix-inspired tunes. The only real annoyance here is the poor vocals, which are so bad that they almost ruin these tunes. But they don't.
The first two tunes ("Green Things from Outer Space" and "Emptiness Gone") are very well-crafted pop tunes with smooth harmonies and some interesting intervallic Wes-type playing by Terje on "Emptiness Gone". Other good pop tunes are "Driftin" (same feeling and sound as the Rascals' "Groovin", with Terje on vocals), "I'm Counting on You" (a soul pop tune with a few early signature Terje guitar licks), "You" (slow-tempo pop ballad with some 'groovy' organ), and "You're Right About Me" (a GREAT country pop upbeat tune with some clean rockabilly pickin' by Terje, and a great 'a-ha-ha-ha' chorus! plus a few great Terje solos that sound the most like the Terje we all know of any solos on this album). Then there are the extremely Hendrix-alike tunes: "Ain't No Use" (very psychedelic with Terje doing his best Hendrix vocals and Hendrix guitar jam - the whole psych shebang - backwards tape, druggy talking vocals, impressive if very derivitive guitar playing, and wide array of psych effects); "Hey Jimi" (obviously a play on Hendrix's "Hey Joe"); and "Do You Dream" (the ending track with laughable mix-bag of psych effects and the whole "Are You Experienced?" thing - obviously a take on that very tune). In between all the pop, soul, psych, etc., there is a pretty cool instrumental track entitled "Night of the Lonely Organist and His Mysterious Pals" which contains some really nice organ playing - a very upbeat jam with an unspectacular guitar solo - great organ but really cheesy "space-sounds" intro and exit.
A bit like Cream meets Hendrix meets Procol Harum.
4) Based in London, Dream is a DJ/producer primarily focusing on bass influenced music with an incorporation of many different sounds. His music is already supported by the likes of Benga, Skream, Rusko, MistaJam, Chase & Status, Skrillex, etc. He has already started moving onto working with various events companies and even festivals, and has taken the stage alongside many famous artists within the UK bass music scene.
Dream’s music gets coverage on BBCRadio1/1xtra, kiss fm, and various pirate stations. He is gaining fans in all parts of the world- throughout Europe, the USA, and even Australia and New Zealand. Dream definitely is a force to be reckoned with within the bass music scene, and has a release on Skrillex's label OWSLA.