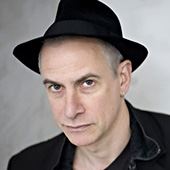 Biography
The CLASH: 1978-1980
the MESCALEROS: 2002
The POGUES: Xmas 2004-6
GOGOL BORDELLO: 2006-7
There is a simple reason why SCRATCHY has toured with the best and it lies in his unique and impeccable skills as selectah and dj. Described as a "music shaman", SCRATCHY has travelled far and wide on his journey as resident of Dingwalls Dancehall to the Gypsy Hotel, playing in concert alongside many of the finest of the past three decades of music, an impressive international array that includes Iggy Pop, Black Uhuru, the Cramps, Jah Wobble, Joe Ely, Jon Spencer's Blues Explosion, Tony Joe White, Ska Cubano, Los de Abajo, the Urban Voodoo Machine, Gallon Drunk, Fanfare Ciocarlia, la Phaze, the Dead Brothers, the Ramones, Blondie and Lee ‘Scratch’ Perry, as well as touring the UK twice with Dr. Feelgood. In February 2007, SCRATCHY accompanied, the Californian reggae band, Groundation around Europe, as their supporting sound system. Much of 2006 & 2007 found SCRATCHY on the road, in concert, with GOGOL BORDELLO, filling the familiar spot he did with the CLASH, three decades earlier.
SCRATCHY is renown both for his nights of ‘Ska, Dub, Roots & Reggae Nuggets’ that inspired the TROJAN compilation ‘SCRATCHY SOUNDS’ and for his constantly shifting and never predictable, ‘Rockin', Roma, Dubbed-Up, Mestizo’ mixes which take a voyage through the sound-scapes of “London to Louisiana, Kingston to Colombia, Bucharest to Bamako.”
Clubs from London to New York to Berlin have resounded to SCRATCHY sets of “music you can dance to.” Festival dates have included Glastonbury, Lost Vagueness, Budapest’s Sziget, Oerol in the Netherlands, Beautiful Days, Lovebox, Bestival and Reggae Sun Ska in Cissac Medoc, whilst, amongst his other international appearances, SCRATCHY has also played at clubs and venues in Switzerland, Italy, France, Belgium, Germany, Spain, Portugal, Finland, the Czech Republic & Austria. SCRATCHY was a showcase artist at WOMEX 2005 and in 2007 put together Rockin’ The Barricades, the download compilation for Piranha.
After taking the controls on a number of radio broadcasts, from Radio Helsinki to BBC 6Music and from Resonance-fm in London to East Village Radio in New York City, SCRATCHY is back on air, currently broadcasting every week on Wirelessfm.net
Having first been schooled on the music of British Beat, American R’n’B and Garage Rock’n’Roll, SCRATCHY has a life-long mission: “to be always on the hunt for the spirit that lives in the growl of Howlin’ Wolf, the manic energy of Iggy Pop and the passion & commitment of Joe Strummer, wherever it lies. This is the Rock and the Roll of the World.”
Instrumentation
dj Scratchy mixes on CD equipment
Discography
Scratchy Selections Available:
Scratchy Sounds: Ska, Dub, Roots & Reggae Nuggets, double CD on Trojan
Piranha Jubilee Vol.7: Rockin' the Barricades, available from all good download stores
Links
http://www.scratchysounds.co.uk