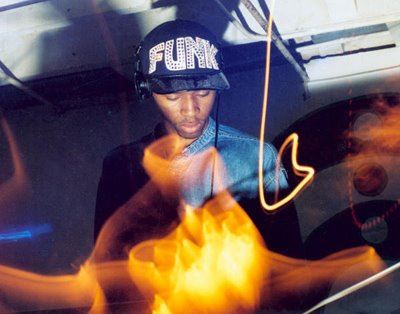 What words can describe the one and only DJ Funk? Pioneer? Party Rocker? Ghetto House Icon? Let's start at the beginning, DJ Funk grew up on the musically rich West Side of Chicago where he was exposed at an early age to Chicago, New York & Detroit dance music. Developing from his early influences he started DJing out when he was just a teenager at house parties, school dances, and neighborhood clubs; selling mix tapes in the hood with his former crew "do or die" to make ends meet. Some of his early DJ influence were Grand Master Flash, African Bambada, Farley Jack Master Funk; basically all the original dance pioneers and there's to many to name. Hip-Hop was also a big influence on DJ Funk and with his early DJ sets he helped push Hip Hop into the chicago club scene when it's wasn't yet popular or mainstream. Mixing House, Techno and Hip-Hop DJ Funk pioneered the "Ghetto House" sound and this sense of crossing boundaries has made his music so appealing and enduring to many people across different musical scenes. DJing professional for over a decade DJ Funk has produced anthem after anthem of bouncing "Ass & Titty" Dance Music for his very own record company Dance Mania Records. Plus, Funk's remix resumé reads like the who's who of dance music: Basement Jaxx, Justice, DJ Sneak, Fast Eddie, to name a few. While licensing tracks to DJ's such as Carl Cox, Bad Boy Bill, Humpty Vision, Jeff Miles, Dave Clark for their mix CD Albums. Funk has played all over the world in high profile clubs in Chicago, New York, LA, Miami, Detriot, Paris, London, Germany, Scotland, Ireland, Amsterdam, Hawaii, Malta, Canada even Tokyo. Sharing the stage along the way with the likes of Daft Punk, Bad Boy Bill, Green Velvet, Justice, DJ Irene, Franky Bones, Funk Master Flex, Ice T, DJ Dan, DJ Qbert, Wu Tang Clan, Grand Master Flash, African Bambata, Run DMC, and the list goes on. DJ Funk's prolific career lead to a featured roll in the history of Dance Music Documentary "Modulation". The movie has all of the greatest Dance Producers and DJ's in the World and has played in independent theaters across the Country. His biggest selling release to date is "Booty House Anthems" which has sold over 1,000,000 copies. Now he's ready with a whole new agenda. He recently bought one of the top recording studios in the chicago area and with his remix of Justice's indie-club hit "Water's of Nazareth" a whole new generations of fans are finding out about what DJ FUNK is all about. He's poised and ready to put "Ghetto House" music back on the map with his new release "Booty House Anthems 2". As the sole figurehead of the entire musical genre called "Ghetto House" "Ghetto Tek" and one of Dance Mania top selling Artist. This man is truly a underground dance music legend.