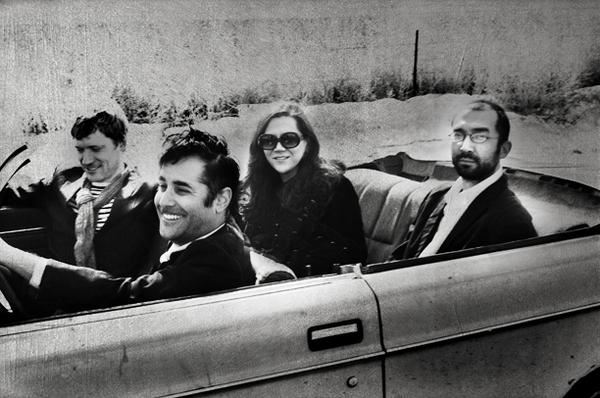 For more than a decade, DeVotchKa has been melting its sweeping collection of influences into an authentic and totally original blend of rock 'n' roll. With the release of the band's fifth romantic influences of the Arizona desert with producer Craig Schumacher (Calexico, Neko Case) to create a compendium of short stories inspired by the varied moments the band experienced since the release of A Mad & Faithful Telling (Anti-, 2007).
Like many bands, DeVotchKa spent much of their early years traveling the highways and byways searching for gigs and a musical direction. As time went on, the band began to foster important musical collaborations with the unequivocal Calexico and the seminal gypsy punks Gogol Bordello. International tours with Gogol and recordings with Calexico have helped spread the band’s sound around the globe.
Originally a backing band for burlesque shows, in their early years DeVotchKa also toured with fetish model Dita von Teese. Numerous nationwide tours in support of self-released records earned the band an underground following. Their song "How It Ends" introduced the band to a wider audience after being featured in the trailer for Everything Is Illuminated, in a Gears of War 2 trailer called "The Last Day", and in an episode of Everwood (Season 4).
Arcade Fire singer Win Butler suggested to DeVotchKa that they cover the Siouxsie and the Banshees song "The Last Beat of My Heart". The musicians found the idea interesting and they recorded that song for the now critically acclaimed Curse Your Little Heart EP. The band did a world tour in support of their previous album, A Mad & Faithful Telling (released March, 2008). The album reached No. 9 on the Billboard Heatseekers chart and No. 29 on the Top Independent Albums chart.["New World" and "Head Honcho" were featured in a season 4 episode of the Showtime television show Weeds.
DeVotchKa's first big break happened when Nic Harcourt, former music director for KCRW, introduced his listeners to a then unknown rock band of worldly sounds on his daily radio show, "Morning Becomes Eclectic". Valerie Faris and Jonathan Dayton, who were listening that
day, stumbled upon the sound for their movie, "Little Miss Sunshine". A critical and box office hit, the film was nominated for the Best Picture Oscar and, for DeVotchKa's soundtrack, a Grammy. The little gypsy wedding band from Denver was suddenly known all across the
nation, playing large venues and major music festivals, including Coachella, Bumbershoot, Lollapalooza, and Mile High Music Festival. After years of toiling in obscurity, the band was selling out shows at the Fillmore in San Francisco and First Avenue in Minneapolis, with
breakout performances at Bonnaroo and Austin City Limits Music Festival. The love spread to Europe, which has become a yearly destination for the band.
"100 Lovers" is the album DeVotchKa had always wanted to make. "How it Ends" was recorded and mixed in only nine days, mainly due to lack of funds. On "A Mad and Faithful Telling,” the band had more time and conducted complex arrangements and experimental recording techniques. For "100 Lovers", DeVotchKa spent over a year defining their sound, taking multiple trips to the desert studio to craft twelve new recordings. The final product is the bands strongest album to date, filled with songs fans will love, songs to draw in new listeners, and
exciting numbers that fit nicely into their rousing live sets. Guests on the album include members of Calexico and Mauro Refosco, David Byrne and Thom Yorke’s go-to percussionist. With a full tour lined up for the spring and dates booked all over the world, 2011 is gearing up to be the biggest year for DeVotchKa yet.
DeVotchKa is:
Nick Urata: Vocals, guitars, Theremin, trumpet, piano
Jeanie Schroder: acoustic bass, sousaphone
Shawn King: drums, percussion, trumpet
Tom Hagerman: violin, viola, accordion, piano