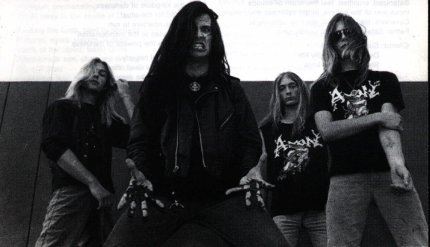 The band was originally called Amon, and recorded two demos under this name, which were later released on CD as "Amon: Feasting The Beast". They changed the name to Deicide in late 1989, just prior to the recording of the self-titled debut. This was done at the insistence of their then-label, Roadrunner Records, because there was a song called "'Amon' Belongs to 'Them'" on the King Diamond album, "Conspiracy".
Deicide:
\De"i*cide\, n. [L. deicida a deicide (in sense 2); deus god + c[ae]dere to cut, kill: cf. F. d['e]icide.]
1. The act of killing a being of a divine nature; particularly, the crucifixion of Jesus Christ. [R.]
Earth profaned, yet blessed, with deicide. --Prior.
2. One concerned in putting Christ to death.
In the early days of the band, and apparently to show how much he despises Christianity, Glen Benton branded an inverted cross into his forehead using nothing but a flaming coat hanger. After seven times embedding a red hot inverted cross into his skin, it has scarred into its shape.
On November 25th, 2004 Glen Benton officially stated that the Hoffman brothers would no longer be in the band due to them cancelling and walking off many shows, among other personal issues. The main reason the brothers left was actually a change in the percentages of royalties between the band. Previously, there had been an even four-way split. Under the new agreement the Hoffmans were entitled to a far smaller share of the profits (with as much as 50% going to Benton). The Hoffmans have since started a new band, using Deicide's original name Amon.
Jack Owen, recently out of Cannibal Corpse and Dave Suzuki, who had worked with Benton in Vital Remains came in to help Deicide on tour. Owen stayed on but Suzuki's place was taken by Ralph Santolla for the recording of "The Stench of Redemption." Glen Benton missed the entire European tour for this album, because he had to attend a court case to do with matrimonial/custody matters; the tour carried on anyway with help from some eleventh hour replacements. Seth Van De Loo (who was playing drums for the support band, Severe Torture) performed vocals on the first four dates of the tour due to the last-minute nature of Benton's decision not to travel. They played these gigs with no bass player. Garbathy "Yaha" of Dissenter was then brought in as replacement bassist/vocalist for the remaining dates. Jack Owen also performed lead vocals on some songs at these shows. This obviously controversial tour followed on from two European tours which were cancelled at the last minute in the 1990s.
Ralph Santolla officially left Deicide in 2007 but performed on "Till Death Do Us Part" as a session musician. Steve Asheim also contributed to the guitar playing on this album for the first time. Kevin Quirion, who plays with Steve Asheim in Council of the Fallen/Order of Ennead, joined Deicide in 2008 as a touring replacement for Santolla. Santolla briefly returned in 2009 but soon left again and Quirion joined as a permanent member in July that year.
In 1992, while Gorefest were opening for Deicide in Stockholm, a bomb exploded outside the emergency door behind their stage (which was on the fifth floor of the building), causing extensive structural damage to the door and the wall. Some people thought that Gorefest, a politically correct band, was attacked by people involved in the black metal scene, but in reality the bomb was planted by the Animal Militia, a UK-based pro-animals group, aimed at Deicide playing later that evening. Glen Benton had received earlier death-threats over his stance on mutilating small animals, and afterward received another letter saying that "Stockholm was just a taste of what is to come".
Glen Benton has also done backing vocals on the song "Hung, Drawn and Quartered" by Cancer on the album "Death Shall Rise", for Napalm Death on the song "Unfit Earth" on their breakthrough album, "Harmony Corruption" and for Cannibal Corpse on the songs "Mangled" and "A Skull Full of Maggots" from the album "Eaten Back to Life" and on the song "Vomit the Soul" from the album "Butchered at Birth".
In 2007, Steve Asheim was arrested and held for police questioning in Austria after presenting money to a bank teller that was covered in red ink. The police believed him to be involved in a recent bank robbery, so he was taken in. After hours of questioning, it was discovered that a red pen had leaked in his pocket, staining the money. Asheim was released without further questioning.