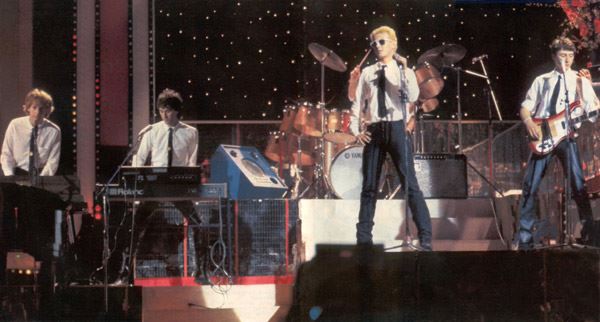 (Seven bands with the same name, scroll down to read descriptions)
Decibel, INDIA:
Decibel is a Progressive/Thrash/Heavy Metal band, from New Delhi, India.
The band has gone through various changes with Karan and Siddharth(ex-guitarist) leaving for pursuing higher studies, Rahul (ex-guitarist) and Ananth (ex-vocalist) leaving for pursuing their own interests.
The current lineup is Krishnan (Drums), Karthik (Bass), Ripple (Guitars), Vijay (Vocals), Naman (Keyboards).
The Green Logo with Desert background is registered Image of Decibel (India).
Kanishk still fills in for composing music and guiding the band in recording.
Decibel, ITALY:
Decibel were an italian punk band of the late '70s. The were the first Enrico Ruggeri's band. They published two albums. The first one in 1978 is "Punk", the lyrics are involved with social frustration and the music is rough. The following issue, Vivo da re, in 1980, contains the single Contessa which allowed the band to sing in the "Festival di Sanremo", the most known italian pop music festival. This album is less rough and more pop.
Decibel, RUSSIA:
A series of experimental bootle vodka compositions by Master Etulainsky followed by the sociological voices recorded around the world by his philosopher fellow Lavrenti Beria during the late 80's. After this record, Fiodor A. Etulainsky joint the skies with his fellow American profesor B. Watux del ejercito loco.
Her Cuban bride is taking care about the worldwide distribution of her husband records with the help of their common friend Fidel Castro.
R.I.P.
To understand more about this artist please look in here:
http://www.last.fm/music/Luigi+Nono
Decibel, MEXICO:
A Mexican chamber/RIO band which formed back in 1974 as a trio (keyboardist Carlos Robledo, bassist Walter Schmidt, and percussionist Moises Romero, later replaced by Jaime Casteñeda), that expanded after 6 months into a sextet. The lineup on their first album included Carlos Robledo on keyboards, Walter Schmidt on bass, Jaime Castañeda on drums and percussion, Carlos Alvarado on keyboards, Alejandro Sanchez on violin (who later on formed Nazca) and Javier Baviera on sax.
They were influenced by bands such as Henry Cow, Faust, Magma, Il Balletto Di Bronzo and others, and by 20th century composers such as Karlheinz Stockhausen. They composed tracks that sound hectic and disorganized and on the debut(?) also created beautiful chamber music with their line up of keyboards, bass, drums, saxophones and violin. Their sound is usually thought of as being warmer than the "cold attitude" of chamber groups such as Art Zoyd.
1978 saw them releasing what is considered their chef d’oeuvre - El Poeta Del Ruido, which was released in a pressing of 1,000 and distributed in the UK by Recommended in 1980. Decibel reformed during the 90’s and did some live shows (and released a live album).
Decibel, NORTH CAROLINA:
There is also a second band named Decibel which is a hard rock band from Greensboro, NC. Made up of guitarists Andrew Pelehach and Robert Gossett, Andy Gossett on bass, and Bennett Noell on drums, the group has been playing in North Carolina for the past 4 years.
Decibel, Zimbabwe:
Decibel is a young proponent of urban African Hip-Hop sounds, who came to fame in Zimbabwe with a catchy DanceHall inspired tune Chido. A play on the Shona (one of Zimbabwe's main Bantu cultures) word for love, and the fact that many females amongst the Shona are given this name, the Afro-Hop ballad thrust Decibel into the urban youth limelight.
Although released in 2001, the song grew to be a dance favourite through Southern Africa in the following years, most notably in Zambia, which saw a large influx of Zimbabweans due to that country's economic recession beginning c. 1999.
Decibel
... is also a name of a jump up drum & bass artist.