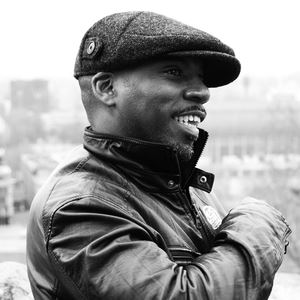 Introducing David Boomah Singer/Songwriter, Born in Birmingham United Kingdom but raised in St Catherine Jamaica until his late teens. As many other children growing up in Jamaica with a passion for music Boomah sang at church and performed at numerous school concerts. He went on to sing on his local Dance Hall Sound System “Small Axe” (when his Grandmother would let him!)
Boomah returned to the UK in 1990 and resided in London; within a couple of months of stepping off the plane he performed alongside leading names of the international reggae industry including Sanchez D, Sweetie Irie, Red Dragon, General Levy, Michael Prophet, Daddy Freddy, Flourgon and Dennis Brown as he was asked to be the opening act at 1990’s British Reggae Awards. Boomah continued to nice up the Reggae/Dancehall venues in the UK alongside his Dance Hall DJ partner UK Apachi before they both stepped into the Drum and Bass/Jungle Arena in 1993.
In 1994/5 when the UK was gripped by the new phenomena called Jungle, Boomah recorded a track with Shy FX called “Who Run Tings”; the track entered the chart at number two and was number one by the following week.
Boomah went on to support UK Apachi and Shy FX on their UK Wide and European Tours, tearing up venues each and every time.
David Boomah’s sweet and “stand out” reggae vocals have been in high demand for quite some time and he has lent his vocals to various producers in the UK as well as producers abroad. Many are surprised to find that the sound of a classic reggae singer are not samples from records of a bygone era but in fact the sound that emits from a seasoned south Londoner. He has been involved in the creation of quality music including Reggae, Dancehall, Jungle, Drum and Bass and more recently Dub-step.
Working in the studio or touring with the following producers and MC’s:
Rebel MC, Shy FX, Potential Badboy, Curtis Lynch, Benny Page, Remarc, G-Corp, Code:Breaker, Engine Earz, Stenchman, DJ Panik, Kyshido and M-Rode and collaborating with artists like Tenor Fly, Daddy Freddy, Topcat, YT, Navigator, UK Apachi, Juxci-D, Gunsmoke, Fredi Kruga and ProFit MC.
In 2008 and 2009, David Boomah had the honour of touring with a living legend, Rebel MC/Congo Natty arguably the founding father of Jungle. Across the UK and Europe, they brought their unique sound to the masses with every venue brimming with crowds waiting with abated breath.
Though David Boomah has never done music full-time (holding down a full time job in the Youth Sector supporting young people) he has managed to notch up 4 no 1's in the Jungle/Drum and Bass Charts proving he is no “One Hit Wonder”….
The aforementioned “Who Run Tings” 1995
“Murderation” the Remix of “Who Run Tings” went straight to number one with heavy rotation from BBC’s Radio 1Xtra in 2003
“Two Tone Sound with Crystal Clear and Code:Breaker on the Ganja Label and “On the Run” again with Shy FX both entered 1Xtra’s Drum and Bass Charts at the same time and both hit the number one spot in the same month in 2007.
“On The Run” was also used in the British gangster flick “Rolling With The Nines” Soundtrack which featured a range of UK Artists.
Fresh from making a massive impact at the Bassline Circus Stage at Glastonbury 2010 and with trailer load of quality music piling up, David Boomah has decided it is time to unleash his debut album to the world which will prove to be a Pandora’s box of strong beats, heavy bassline and lyrical consciousness.
The album will be like no other as David Boomah stretches versatility to new levels working with a wide range of producers on the project such as Rebel MC, Benny Page, Marcus Visionary, Curtis Lynch Jr, Potential Badboy, Remarc, Liondub, G-Corp, Q-Bik, Stenchman, Rogue State, Demolition Man as well as some new names on the music scene.