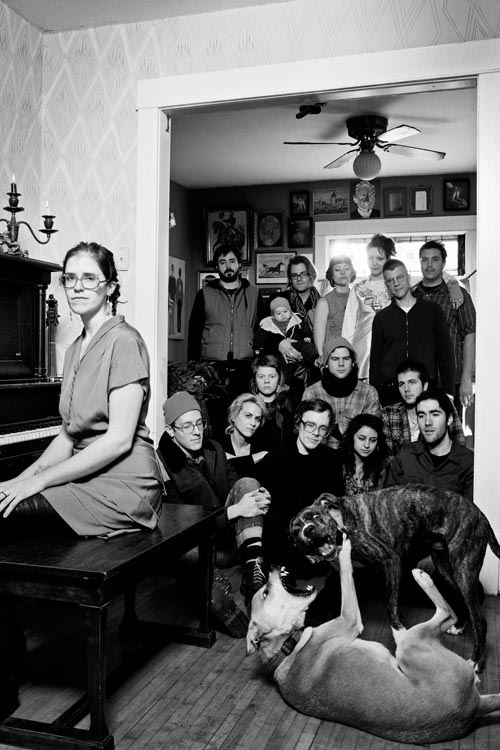 Minneapolis-based chamber-folk sextet Dark Dark Dark revel in the wonder that is around us always. On their breathtaking sophomore album Wild Go, which arrives October 5, 2010 via Supply and Demand Music, the band has created a stirring reminder to seek out that magic. Their dramatic sound sets Nona Marie Invie’s soaring, haunting voice against age-old instrumentation that evokes the soundtrack to a beautiful film.
The 10-song collection is a marked evolution for the group, which began in 2006 as a collaboration between multi-instrumentalists and singers Nona Marie Invie and Marshall LaCount. These two inspired songwriters bring together disparate influences – including minimalism, New Orleans jazz, Americana, Eastern European folk, and pop – creating something altogether singular and absolutely epic. This diversity is their greatest strength. They use contrast - in texture, tone, and imagery - to build their own deeply-experienced world into the songs. For example, on the single "Daydreaming," Invie's warm voice and piano are supported by spare and clean drums, a guitar with lush reverb, and cascades of dirty and distorted banjo, while an accordion wanders its way through harmonies.
For Wild Go, the group expanded the sound they captured on their 2008 debut, The Snow Magic. They've continued with the line-up that solidified on their critically-acclaimed Bright Bright Bright EP (March 2010), and pushed further with more nuanced arrangements and more personal content. The songwriting is shared by Invie and LaCount, while the band then crafts their parts and the arrangements. They credit a few years and constant touring with helping them to mature and collaborate to shape the music and its impressions on listeners. They've achieved a real kinship and communication that is evident in the way it pulls us in to their experiences.
The record's title comes from the song of the same name. 'Wild Go' is an apocalyptic story, but all is not lost. After describing 'children born, without wings,' the song continues with some relief, that 'times are different now, the bricks that rose now fall, branches push through the walls, to carry, on paths that we don't see, warm air lifts us free.' Invie had written the music, and LaCount explains that when he wrote the lyrics, he was reading Tom Spanbauer's In the City of Shy Hunters, which includes "a legend of the island of Manhattan when it was being traded between the native people and the Dutch. The Dutch were thinking they were getting a steal on this island and the native people think they’re getting rid of a cursed island to these stupid white people, so both sides were winning in their minds." We all have an idea of what New York is now, and he wanted to write a song as though the island was returning to its natural state.
Wild Go’s first single, “Daydreaming,” is a response to Elephant Micah's homesick dirge “Wild Goose Chase,” which in turn was a response to Hazel Dickens’ bluegrass classic “Ramblin’ Woman.” “’Wild
Goose Chase’ really touched me,” Invie says. “I wanted to reciprocate in a way that captured a moment in my own life. I’ve been traveling and touring for so long now – and it’s been great – but I have this internal conflict between having a nomadic lifestyle and needing a home.” The song is thematically linked to the album’s opener, “In Your Dreams.” “Both are about finding a place where you can be free,” reveals Invie. “That’s what I’m always looking for.” Invie considers Wild Go the band’s most emotionally open statement to date and points to the wistful, piano-driven lullaby “Robert” as her most honest and personal moment. “It’s about a loved one growing older, and closer to death,” she reveals.
The group goes into the studio with a vision and a complete idea of each member's parts and the arrangements. Their unique variety of instruments complement the spaces they choose to work in. This approach facilitates dynamic and expressive performances, capturing the layers and textures that bring Dark Dark Dark's great songwriting and arrangements to life. To get their expansive and emotional sound on tape, the band collaborated with producer Tom Herbers, a Minneapolis stalwart known for his credits with the Jayhawks, Low, and Soul Asylum, who also helmed this year’s Bright Bright Bright EP. They worked live to analog tape to add immediacy, intimacy, and warmth to the songs. The sextet got the basics finished in two weeks during January 2010. They used a trio of Minneapolis studios – including a renovated church and an old theater, and recorded live with very few overdubs.
The band thrives on touring, and will throughout the US and Europe in support of Wild Go. “We try to create a magical space with our performances,” Invie reveals. “I’m always blown away by the number of people that come up to me afterward and say how much the music touched them. I love it when people can dance and have fun at our shows, but it's when people are quiet and I can tell that they are feeling it on a personal level that I feel like I’m really connecting.”
Wild Go will connect with listeners and transport them into Dark Dark Dark’s mesmerizing vision of a world within this world. They don't settle for the ordinary, and they ask that we come along. The album is released October 5th, 2010 on Supply & Demand Music.