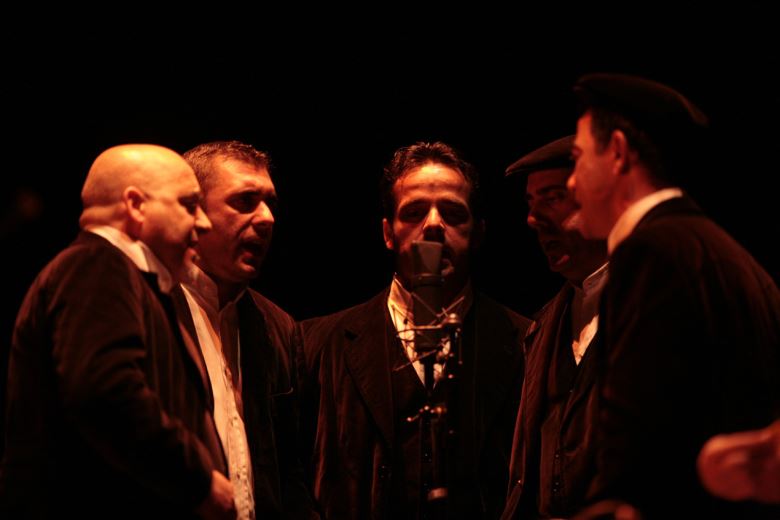 Other names for this group: Cuncordu De Orosei, Tenore De Orosei.
Voices of the Cuncordu originate and are shaped in the school of religious fraternities Sas Animas, Santa Rughe e Su Rosariu and in the so-called "tzilleris" (bars). The first trained the members of Cuncordu to the holy song (called “a cuncordu”), the last to profane song (called “a tenore”).Faithful to such musical heritage, after a hard training with the ancient singers, the musicians learnt how to perform 2 different techniques: "a tenore" and "a cuncordu". Therefore, both accompaniments for traditional danza and love serenades, both gotzos (holy songs in the language of Sardinia) and old religious songs are part of their repertoire. Orosei is perhaps the only town in Sardinia where these 2 different vocal techniques lasted over time. Enthusiasm /passion towards music led the members of cuncordu to look for different musical expressions. As a result, the project Colla Voche - published in 2009 with the collaboration of the great violinist Ernst Reijseger and the Scottish drummer/percussionist Alan Purves “Gunga” - enchanted audiences all over the world. This album enriched the musical background of the group and opens the artistic life and strong friendship of the members. Besides it is the first and so far best example of fusion between traditional and contemporary music. From 2004 they bring a musical version of “Tamburini on tour – work by the writer Marcello Fois, who acts as voices perform cànticos e istrippìthos (songs and sounds) from Sardinia. In 2004 they took part in “Il rito e la memoria” by Paolo Fresu - suggestive and highly emotional music concert featuring the holland pianist Diederick Wissels, the arch quartet Alborada, Cuncordu from Castelsardo, the Cuncordu 'e Su Rosariu from Santu Lussurgiu, Elena Ledda and Dhafer Youssef, promoted from the “Musica dei Cieli” festival in Milan.
In June of 2004 they recorded in Paris an unreleased ensemble, sound track of 2 films by the German director Werner Herzog, “The wild blue yonder” and “The white diamond”. Again Ernst Reijseger and the Senegalese singer Mola Sylla join the group (voice of the more recent projects by Omar Sosa). The film “The wild blue yonder” was also presented at the Biennale of Venice and won the critics award. From 2006 the group performs the cine-concert “Requiem for a dying planet”, a synthesis of sounds and images from the 2 above mentioned feature films, successfully welcome in Italy and in Europe (AterForum in Ferrara, Schermo Sonoro in Pordenone, Time In Jazz in Sassari, Suoni e Visioni in Milan, UMO Jazz Fest in Helsinki, Stimmen Festival in Lorrach, e Festival Glatt & Verkhehrt in Krems).

The group is also known for Collaborations with musicians of the contemporary scenario such as Vittorio Montis, Riccardo Dapelo, Andrea Saba, and for the early “Voyage en Sardaigne” by Enzo Favata.The encounter with the German producer from the German label was extremely important and brought to 4 albums (Amore Profundhu, Miserere, their reprint known as Voches de Sardinna, Colla Voche & Requiem for a dying planet).The group also boasts many outstanding participations to European concerts and festivals in Paris, Calvi, Marsiglia, Munich, Monaco di Baviera, Frankfurt, Torin, Venice, Florence, Toledo, Barcelona, Amsterdam, Stockolm, Anversa, Lyon, Fundao, Ajaccio, Saalfelden, Groningen, Utrecht, Stoccarda, Berchidda, Losanna, Lipsia, Bolzano, Milan and Brescia. Among their most impressive improvised performances Voci Bulgare Angelite at the Konzerthaus in Berlin and the one featuring the Huun-Huur-Tu from Tuva Republic at RIAS in Kammerchor.