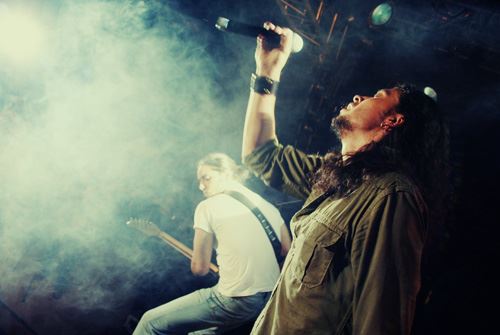 Denis "Carlos" Balakirev: vocal
Tatiana Korneva: bass guitar, backing vocals
Dmitry Tochilov: guitar, backing vocals
Dennis Riemer: drums
The beginning of autumn 2005. On the eve of the first performance with the new «Lose» (the name of the first song), a group of musicians to select the name Cry Baby. At this point, the group consists of: Dennis "Carlos" Balakirev - vocals, Dmitry Tochilov - guitar, Dennis Rymer - drums and Anton Kvasov - bass. Behind him at the time were six months of rehearsal sessions and ten songs. It was they who were presented to the public.
Immediately after the first performance for several reasons the group leaves Anton. Place the bass guitarist briefly becomes vacant ... recently returned from the "American holiday" Tatiana root - minded in spirit and musical views, after a brief conversation accepts the offer and becomes a new participant. Since that time, Bass Cry Baby charms, charms and sounds in a new way. The Group actively rehearsing a new cast. After a few months in early 2006, the program is much overgrown completely new material formed in the full album.
Winter and spring marked by concerts in local clubs, formed a "live" look and sound of the group. Cry Baby (in the Carlos, Dimitri, Denis and Tatiana) get into the studio to record their first album. In the early summer of 2006, the guys take stock of hard work - studio album is ready! The focus now is his subsequent edition of the CD. A group meanwhile takes a vacation to the summer-autumn period, Dmitry and Tatyana conquer North American latitudes, Carlos serving the southern capital ... is the accumulation of new experiences and impressions. Despite the thousands of miles between the musicians is an ongoing dialogue about the future of the group.
By year end, "wanderers" back to Karaganda. To meet again on the winter of 2007, the band resumed rehearsals, enriched with new songs and ideas. In parallel with the creation of the new, is running the same program on live performances. A number of projects on local television channels aired with Cry Baby. A few months on the air broadcasted the first live video of the group. Spring is marked by a series of concerts at local venues. A group decides to spend the approaching summer "to the max": a lot of shows outside their hometown.
Parallel ends work on the album art and an opportunity to its publication. The disc is printed in Almata and the group is the first work of the same name Cry Baby. As planned, the hot summer is full of out gig: performances in Astana and Pavlodar, the first national festival of bikers in Balkhash and the August fest in Almata. August 12 is now available from CD presentation in Karaganda at "The Fifth Corner". Bright and concert, to please many fans, it is a unique and professional report, the starting line on the way to the new.
Thanks to the Internet (all tracks are available online) album diverges in the world, and finds fans in different parts of the world. Several songs fall into the well-known radio airplay, leading webcasting.
Since the beginning of 2008, the team toured extensively in Kazakhstan and beyond. In May, the band became a laureate of the prestigious A LIVE MUSIC AWARDS in two categories: "Best Vocalist" and "Best Actress". Besides Cry Baby as the best party band Asbis Beer Party in 2008 and acts as headliners at the Second Festival of bikers in Balkhash.
After a series of summer concerts in the autumn of 2008, the band started recording their second album, the registration of "9 Songs", the basis of which are already beloved public new "Russian-speaking" songs. Recording took place in October and November 2008, in the Moscow studio «Z-studio». Sound engineer and sound producer Arkady by the legendary Navajo, whose light hand with the band found a new modern sound. Because of this record was a breakthrough Cry Baby on the Kazakhstan stage. During his stay in Moscow group, Cry Baby plays in the legendary Moscow club "Point", introducing sophisticated metropolitan audience with their repertoire.
Back in Kazakhstan, in the late 2008-early 2009, the band experimented with acoustic arrangements of his songs and create a concert program, consisting of both songs from the first album, and from the new album, backed program favorite songs by other artists. Moving away from the traditional set of tools Cry Baby replaces the bass guitar on the second acoustic guitar, changing the style of many of his songs and playing the acoustic club gig that comes as a surprise for the audience and the creative breakthrough musicians to write new songs.
Upon completion of the final stages of mixing, mastering, and album art, the album "9 Songs" released in March 2009, with support from the label "VYSTRELproduction." A few songs from it immediately fall into playlists regional radio stations "Radio-TEX" and "Our radio Karaganda". Album "9 Songs" is available for sale in the network of music stores in the city on CD. Group Cry Baby opens electric-concert season, which is called "9 Songs Tour" shows in the cities of the vast Kazakhstan. The basis of the concert program are songs from the album "9 Songs" and some brand new songs that were not previously present to the public.
"9 Songs Tour" plans to cover all the major cities of Kazakhstan ... and more!
And everything is just beginning!