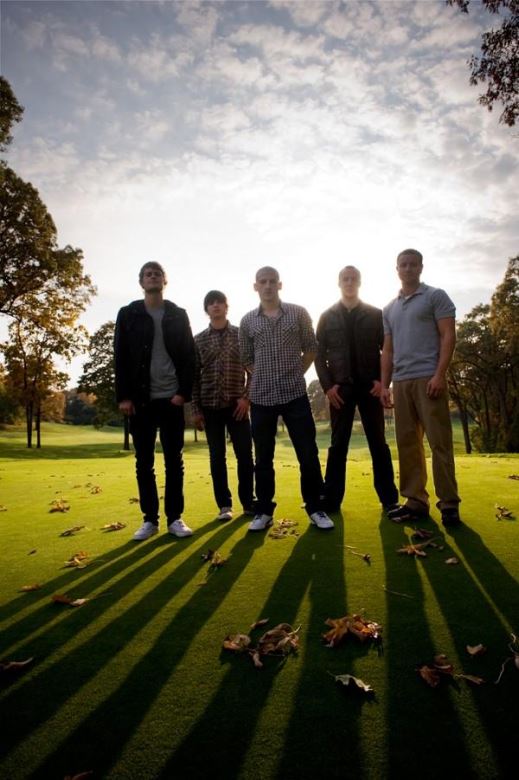 Crime in Stereo is a Long Island-based hardcore punk/melodic hardcore band, formed in 2002. On August 9, 2010 they announced that Crime In Stereo was no more. On October 3, 2012 they announced the end of their hiatus, saying they will be writing new music.
“It was a strange year,” says Alex Dunne, Crime in Stereo’s songwriter and guitarist.
This is in reference to the twelve months between the 2006 release of their critically acclaimed The Troubled Stateside and the beginning of recording "Crime in Stereo Is Dead." “Strange” might be an understatement. Crime in Stereo (Dunne, singer Kristian Hallbert, bassist Mike Musilli, drummer Scotty Giffin and guitarist Gary Cioni) thought they had seen the end of the road. After coming home from six straight months of touring promoting Stateside, a release that All Music Guide praised as “As ambitious as modern hardcore is likely to get,” and hitting the road on tours ranging from support slots for Brand New and the Warped Tour, Crime in Stereo had made a name for themselves. With sharply intelligent critiques of the current social and economic landscape set to a backdrop of music that breaks out of the standard hardcore mold, Crime in Stereo was moving into the forefront of the underground.
But time was taking its toll. Following almost three consecutive years of touring non-stop in support of Troubled Stateside and their debut full-length Explosives and The Will To Use Them, in 2004 the band felt disconnected from their label and, put simply, lost. Dunne went to work as a political consultant, managing successful judicial campaigns on Long Island, New York for the state's Democratic Party. “It was a bizarre thing to have happen; driving around the country playing shows all summer with your hardcore band, and then within a week of coming home from tour, working as a paid consultant.” Further complicating the situation was Dunne’s diabetes reaching a new severity. His situation worsened to the point where he now has to self-administer injections to his stomach every day to maintain himself. Being on the road, for Alex Dunne, suddenly became more complex and possibly life-threatening.
It wasn’t just Dunne that found his home life evolving in strange ways, however. Co-founder and bassist Mike Musilli, on the verge of earning his masters degree in education, gained employment as a teacher in his hometown high school; the same institution he and Dunne had graduated from years before. With the band spending continually less time together and steadily more working in their respective fields, the future of the band looked grim. “For a minute there,” said Musilli “it really looked like Crime in Stereo was dead.”
After spending a few months at home, the band reemerged from a de-facto hiatus to tour the East Coast and Midwest in a whirlwind run with Glassjaw. And as Dunne, along with drummer Scotty Giffin, began spending time back in Dunne’s basement working on songs, vocalist Kristian Hallbert was taking vocal training. At the same time, Bridge Nine Records entered the fold for a very apt partnership. “Initially, the ‘Is Dead’ thing was about the literal end of the band, but then I think it became something else. It was about starting out one way, and then growing into an entirely new beginning,” Dunne explained. “Kristian was really the catalyst in our evolving sound. I think once we heard how he was singing, we realized we had to make this record.” From screams and shouts to the occasional falsetto, Hallbert’s vocal performance on Crime in Stereo Is Dead is exceptional. “We’re a hardcore band because we’re hardcore kids, that’ll never change,” Hallbert explains. “But musically, we know what we’re capable of, and we wanted to challenge ourselves and show everyone.”
Crime in Stereo Is Dead is unlike any record that the band, or Bridge Nine Records has ever produced. It’s a punk record, it’s a hardcore record, and it is an intricately written album start to finish. But it doesn’t really fit into the “melodic hardcore” or “punk” category without having to further qualify the description. With longtime collaborator Mike Sapone (Brand New, Straylight Run, Taking Back Sunday, MC Lars) in tow, Crime in Stereo were able to focus on making their most musically and lyrically ambitious record to date. The result is a record that features the familiar Crime In Stereo sound (“Nixon”), but it also showcases the band at their most explosive and discordant (“XXXX-The First Thousand Years of Solitude”), their catchiest (“Animal Pharm”) and their most ambient and experimental (“Small Skeletal” and “Unfortunate Tourist”). Crime in Stereo Is Dead ends with “Orbiter” and “Choker”- two songs that are almost identical chord progressions played at an entirely different tempo. They culminate in the songs’ respective bridges that are lyrical mirror images. Crime in Stereo Is Dead is a wakeup call to a scene that sees melody as taboo, and a world that sees catchy music as safe and lyrically passive. It is an enigmatic release--it’s hardcore, it’s punk, but it’s a difficult record to preface with bands that have come before because this record surpasses the echoes of its influence in an entirely new mold.
Crime In Stereo Is Dead is in stores October 23rd 2007, and it is a release that guarantees 2008 will be another crazy year for the whole band.