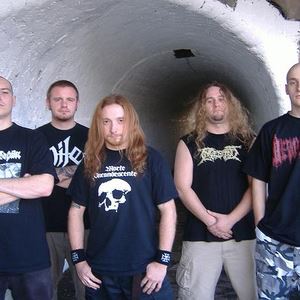 Crepitation is a British death metal band formed at the latter end of 2005 and early 2006. The first line-up was completed by the addition of friends Ollie and Paul Whitehead (Clanglestrim Pro-Duck-Shins) on vocals, who both made ridiculous larynx noise to accompany the music with no need for lyrics. Crepitation are primarily influenced by U.S. styled Brutal Death and the Texan and Columbian Slammin' Death Metal styles.
A three track Promo CD was recorded with programmed drums in March '06, it was well received by most who got their hands on the limited copies so two more tracks were written that were deliberately held back for a Demo CD of all five tracks when a human drummer could be found. A Welshman, already friends with some members of the band, heard the Crepitation Promo and was impressed enough to offer his services as said drummer, so Lyn Jeffs (Ingested) was added to the ranks in April '06.
The lads had their first two gigs in Manchester and Birmingham supporting Insidious Decrepancy, Godless Truth, Infected Malignity and Infected Disarray in May '06 and have gone on to play some very lucrative shows sharing the stage with such bang on bands as Immolation, Defeated Sanity, Skinless, Visceral Bleeding, Goratory, Dying Fetus, Gorgasm, Degrade, Avulsed, Desecration, Severe Torture, Gorerotted, Abysmal Torment, Sanatorium, Human Mincer, Blood Duster, Devourment, Katalepsy, Asphyx, Insidious Decrepancy, Putrid Pile to name a few with many more to come.
Just before and some time after the May '06 gigs, original guitarists and founding members, Shane and Dan left the band due to personal issues. Sean Hynes (Ingested) was drafted in as replacement for Shane just prior to Dan's departure. Ollie then left to fully concentrate on his academic career who was replaced by Morbid Mark Pearce (Amputated) on Guttural vox. Liam Millward (Theoktony) joined on second guitar to replace Dan, then original bassist Matt left, only to be replaced by another Matt, Jones (Neuroma, Decrepit Womb), thus stabilizing the line-up for a while.
The band then recorded five tracks for the North-West Slam-Fest 3-Way Split CD along with Kastrated and Ingested which was released by Grindethic Records and Clanglestrim Pro-Duck-Shins in April 2007. Two brand new songs, Opthalmic Arterial Hammerage and Pathological Armoured Ferret Tank, were recorded in September '07 just for Promo purposes with the Split CD line-up. Sean and Lyn then left the band in January '08 to fully concentrate on Ingested subsequently leading to Crepitation splitting up which disappointed more people than expected.
In March '08 the band reformed without Liam as he couldn't commit to what was required. So session musicians Jonathon Rushforth – Drums (ex-Gorerotted, Infected Disarray), Tom Blackwell - Guitars (Blasphtized, Days Of Perversion) and Adam Hooton – Guitars (Blasphtized, Days Of Perversion) joined to put their two penneth in. In April '09 Tom and Adam's session status expired and died so they were replaced on guitars by Paul McGuire (Cerebral Bore) with Matt stepping up to 6 strings and Joe Mortimer (Neuroma) on bass. July '09 saw Paul 'Gek' Whitehead leave after his last show at Obscene Extreme Fest in the Czech Republic (see blog).
Crepitation's current members live all over the U.K. making the productivity of this outfit less than a sloth on his day off. Currently writing new stupidly annoying material at a snail's pace for a release of some sort or another, but don't hold us twats to anything or ask us when...fook nose like!!!