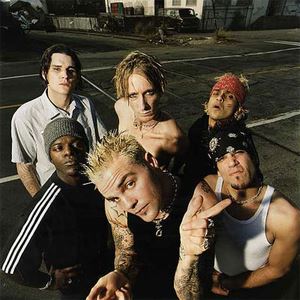 Crazy Town is a hip-hop/rock band formed in Los Angeles, CA, USA in 1995 by Bret Mazur and Seth Binzer. The band is best known for their 2001 single, "Butterfly", which reached number one on the Billboard Hot 100 chart. Members of the band mix elements of hip-hop and rock but are mainly alternative hip-hop. As a group, they have released two studio albums, The Gift of Game and Darkhorse. Their debut album was certified Platinum by the RIAA.
The band did not start until 1995. Around that time Mazur and Binzer, who go by the names of "Epic" and "Shifty Shellshock" respectively, started collaborating together. However they did not become serious about releasing any material until much later. By early 1999, Crazy Town consisted of Mazur, Binzer, Rust Epique, James Bradley Jr., Doug Miller (aka Faydoe Deelay, Adam Goldstein (aka DJ AM), and Antonio Lorenzo "Trouble" Valli. Their début album, The Gift of Game, was released in November 1999, having been recorded earlier that year.
The bands first album The Gift of Game and there well known single "Butterfly" was followed by a tour support slot for the Red Hot Chili Peppers. Guitarist Rust Epique left the band while the album was being mixed, and Crazy Town was joined by Kraig Tyler shortly after. The first two singles from The Gift of Game, "Toxic" and "Darkside", were released but failed to chart.
In 2000 Crazy Town was signed to tour with Ozzfest, however they were forced to withdraw after only two weeks when Binzer was arrested after he threw a chair through a window whilst he was drunk. Turntablist DJ AM left at this point. Crazy Town then released their third single in 2001, "Butterfly" (which uses samples from Red Hot Chili Peppers' "Pretty Little Ditty"). It reached number 1 on the Billboard Hot 100 chart. After this DJ AM returned. Soundscan reports 100,000 album sales of The Gift of Game prior to the release of Butterfly,[4] after Butterfly reached number 1 sales exceeded 1.5 Million.
Crazy Town toured with Ozzfest in 2001, however without DJ AM. They were received with mixed reviews, many people in the Ozzfest crowd mockingly called them "The Butterfly Boys". A fourth single, "Revolving Door", was released with minimal success.
The bands second album Darkhorse, was produced by Howard Benson and released on November 12, 2002. Benson's influence resulted in a more rock oriented sound. Prior to recording the album, drummer James Bradley Jr was replaced by Kyle Hollinger. The album achieved little commercial success, spawning only two singles: "Hurt You So Bad" and "Drowning". Shortly after the release of Darkhorse, the band broke up in 2003.
During Crazy Town's hiatus, Bret Mazur went on to form The Pharmacy, a record-producing company.
Rust Epique joined pre)Thing in 2003. He died of a heart attack shortly before their debut album 22nd Century Lifestyle was released in 2004.
Binzer released his first solo album in 2004, Happy Love Sick, under his alias Shifty Shellshock. He also contributed vocals to Paul Oakenfold's single Starry Eyed Surprise.
In late 2007, Crazy Town announced that the remaining members had reformed and were working on a new studio album, tentatively titled Crazy Town is Back, which would be released sometime in 2008. The album has since been delayed.
On August 26 2009, Crazy Town performed at Les Deux, in Hollywood, California, on stage together for the first time in five years. The event was to promote their upcoming album and celebrate the late August birthdays of lead singers Mazur and Binzer.
On August 28 2009, former member Adam Goldstein was found dead in his apartment.