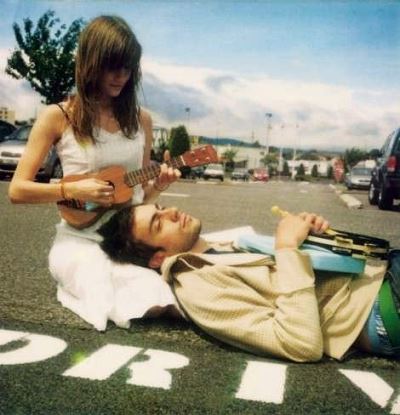 There are at least six bands called Cocoon:
1. Cocoon is a two-piece French band formed in 2006 by Mark Daumail (born 1984, composition, lead vocals, acoustic guitar, ukelele, banjo, beatbox, etc.) and Morgane Imbeaud (born 1987, vocal harmonies, keyboards, arrangements).
"I wanted it to be a male-female duet. A duo like the White Stripes are in rock — we wanted to be the equivalent in folk music," Daumail says. Their songs are entirely sung in English. "French artists singing in English isn't something new. It goes back to groups like Les Thugs and Syd Matters," he remarks.
Daumail says he's always been interested in folk music: "Basically, Cocoon's musical inspiration goes all the way from groups like The Pentangle and Fairport Convention right through to the 'new folk' movement that surfaced around the beginning of 2000 with artists like CocoRosie, Devendra Banhart and Sufjan Stevens."
In 2006, the pop / folk duet released its first EP, entitled I Hate Birds, and won the 2006 edition of the Big Jama regional contest. The following year, Cocoon was signed onto the French indie label Sober & Gentle. The band released a second EP, From Panda Mountains, followed by their first album, entitled My Friends All Died in a Plane Crash. The group won the CQFD music contest organized by the French magazine Les Inrockuptibles and performed in the new talent section of the rock music festivals Le Printemps de Bourges and Les Eurockéennes de Belfort.
Official site: http://www.myspace.com/listentococoon or http://www.frompandamountains.com/
2. Cocoon is a solo project by one of the founding members of the French group Clair Obscur which was one of the first groups in the 80's in France to work across music, visual arts, dance and theatre. Clair Obscur was one of the very few bands of the French cold wave/industrial scene which became known abroad with its records released by the British labels Cathexis, All the Madmen and NER (compilation From Torture to Conscience with Current 93, In the Nursery, Death in June, etc).
Christophe Demarthe has been working for many years at the frontier of sound and visual arts. He has created sound architectures for theatre, dance, cinema, visual arts, radio... mainly working with the drama producer Bruno Lajara (501 Blues, Ne Pas, Fuites, Après Coups, Léon le Nul...) and with Jean Couturier for radio dramas on France Culture. He has written music for the cinema and for television (France 2, Canal Plus).
In 2004 he created Cocoon, releasing his debut album on the French label Optical Sound. Much more than a mere sound object based on an album concept, Cocoon can be read as a global artistic project close to the performance. It is an audio set accompanied by videos and asking for an active participation of the public, banishing the passive listening of laptoppers. The stage disposition creates a real contrast with the characteristic immobility of electronic music concerts, and definitively places itself at the crossing point of image, sound and live show, for a moving interdisciplinarity.
Since its creation in 2004, Cocoon has participated in the festivals Nowa Fabryka (Bytom, Poland), Emergences/Villette Numérique (Paris), Nuit Blanche (Paris), Emo-Son (Bourges), Salon Light (Paris)... He has been reviewed in Libération, on Arte-TV.com, in the magazines Mouvement, Télérama, The Wire, on France Culture... His second album, More Violent Days Are to Come (OS.012) (Optical Sound), has been nominated for the Qwartz Electronic Music Awards 2006/2007.
3. A Czech band from Kolín.
4. An Alternative/Emocore - Band from Czech republic.
5. An electronic/ambient duo from the USA.
6. A Romanian rapper from Piatra Neamt