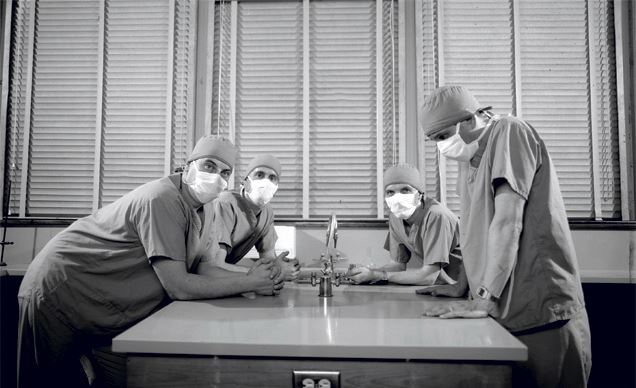 There are four artists with this name.
1. An English post punk band
2. An American hardcore punk band
3. An Australian rapper
4. A hip-hop group from Estonia
5. A psychedelic group
1. Clinic is a Liverpool based quartet noted for their eclectic and often fast-paced sound. Their distinguishing style can commonly be recognized by their prominent use of vintage keyboards and organs, most notably the Philips Philicorda, and peculiar off-scale chord progressions. They also make deft use of melodica, clarinet, flute and more recently harpsichords, dulcimers and strings. With influences ranging from punk to obscure psychedelia, dub, easy listening , '60s girl groups and weirdness beyond. All with Ade Blackburn's distinct vocal delivery and lyricism.
Clinic was formed in 1997 by Ade Blackburn and Jonathan Hartley following the split of their previous band, Pure Morning. They developed early notoriety for featuring instruments (primarily keyboards/organs) that were acquired at various rummage sales and flea markets. Brian Campbell and Carl Turney joined the band and soon their first EP I.P.C. Subeditors Dictate Our Youth was released on their own Aladdin's Cave of Golf record label. The EP made John Peel's Festive 50 at the end of the year and two other self-financed singles followed in 1998.
In 1999, the band signed to Domino Records and the first three singles were compiled on a single CD or LP. The following year their debut album proper, Internal Wrangler, was released. Album tracks "The Second Line", "The Return of Evil Bill" and "Distortions" were released as singles - "The Second Line" was later used in a television advertisement for Levi's jeans, and reissued. In the same year, the band played at All Tomorrow's Parties and Scott Walker's Meltdown and toured with Radiohead.
Two further albums, Walking with Thee and Winchester Cathedral, followed in 2002 and 2004 respectively along with tours with the Flaming Lips and an appearance on Letterman, and the band released their fourth album, Visitations, in October 2006. "Tusk", the first single from the album, was made available as a free download from the band's official website in February 2006, and "Harvest" preceded the album in early October.
Funf, a compilation of b-sides and rarities, was released in June 2007. Clinic also appeared with Roky Erickson at Jarvis Cocker's 2007 Meltdown and later in the year will tour with Arcade Fire. "If You Could Read Your Mind" from Visitations was used in the arthouse film 'Hallam Foe' the same autumn. 2008 saw the release of the single 'free not free' preceding their fifth album 'Do it!'.
Blackburn’s distinctive acidic vocals are a trademark of the band, and they are also known for wearing surgical masks and costumes while performing and in promotional photos. Despite widespread critical acclaim, they are still considered too raw by the mainstream.
Bubblegum’, Clinic’s sixth album, is a rewiring of Clinic’s trademark hyped up sound. In place of churning riffs and wired vocals is a dream state of harpsichords, dulcimers and strings. Melody and softness combine with the band’s unique internal logic to produce a record of pop beauty.
Bubblegum is Clinic throwing us a curveball. Alternating between lost soundtracks to exploitation films: ‘Lion Tamer’, ‘Un Astronauta En Cielo’, watery pop-psych: ‘Bubblegum’, ‘Linda’, ‘Forever’ and ping-pong symphonies: ‘Milk & Honey’ and ‘Another Way Of Giving’, this is a very different and very singular Clinic.
Produced by John Congleton (Bill Callahan, St Vincent) and recorded at Elevator Studios in Liverpool, 'Bubblegum' is a high water mark in Clinic’s career to date.
The album will be preceded by the beautiful new single 'I'm Aware' out September the 20th 2010.
http://www.clinicvoot.org/
http://twitter.com/clinicvoot
2. A hardcore punk band that plays music similar to such bands as have heart, champion, kids like us, comeback kid, modern life is war, bane, and verse. They hail from North Central, New Jersey.
3. An Australian rapper from Brisbane. Not much is known about him.
5. Clinic were Alan Reeves, Phil Trainer and Philip Brigham they released one album in 1973 called 'Now We Are Even' and contributed to the soundtrack of the 1970 film 'La Route De Salina'. Their song 'The Chase' is featured on the Kill Bill Vol. 2 Original Soundtrack.