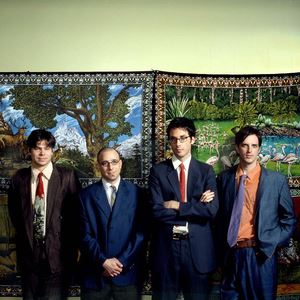 Clem Snide is an alt-country indie rock project from New York, NY and Nashville, TN consisting of songwriter/singer/guitarist Eef Barzelay, and a rotation of musicians. Primarily an outlet for Barzelay, the band consisted chiefly of bassist/cellist Jason Glasser through mid-2006, as well as more recent members including multi-instrumentalist Pete Fitzpatrick, and his cousin Brendan Fitzpatrick.
"Clem Snide" is a character in several novels by William S. Burroughs, including Naked Lunch, The Ticket That Exploded, and Exterminator!. The band formed in 1991, when Barzelay wanted an outlet for his songwriting, but separated in 1994 after releasing a couple of 7" singles. A few years later, Barzelay met back up with Glasser and began writing songs again, performing under the name Fruit Key. After adding a bassist and drummer, they reclaimed the name Clem Snide, recorded songs, continued performing, and, in 1998, issued their first album, You Were a Diamond (produced by Adam Lasus) on Tractor Beam Records. This album received some short-term major label attention, enough for Clem Snide to release their second album, Your Favorite Music, on Sire Records, before being dropped prior to the album's release.
In 2001, Clem Snide released the album The Ghost of Fashion, which received some extra press due to the song "Moment in the Sun" being featured as the theme song for the second season of the NBC program Ed, after the show lost the rights to the Foo Fighters' "Next Year". Fans were allegedly distraught by the change, and Ed went back to the Foo Fighters for the third season; "Moment in the Sun" continued to be used as the theme song outside the U.S.
At this time, then-bassist Jeff Marshall left the band citing the touring schedule, as the band had performed a number of world tours in support of Fashion. He did, however, stay with the band to help record their fourth album, Soft Spot.
Clem Snide released their fifth album in 2005, End of Love, and in February 2006 Barzelay released his first solo album, Bitter Honey, on spinART Records. Barzelay' s latest solo record, Lose Big was released on June 17th 2008, on 429 Records. Barzelay confirmed that the band broke up during the proceedings, and that another record was completed around the same time, the newer recording set to be released first.
A live, tour-only, CD is also planned in conjunction with a fall tour by Barzelay.
In 2008, Eef Barzelay announced that Clem Snide has reformed and will release a full-length; "Hungry Bird" as well as an EP entitled "I Need You Now". They will support these releases with a tour.