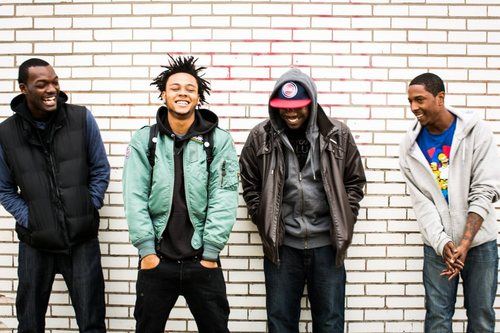 How do you put into words the deftness, terse punctuality of four distinct individuals who’s vibrant vocals collide and sonically produce frequency’s not measurable by roygbiv, all to intertwine over illuminating instrumentals forging a single force that hits you where your soul is? You listen…
From the land of Hip Hop Giants, Clear Soul Forces is next to carry the burning flame for the city of Detroit, Michigan and bring the soul back to Motown. Comprised of four members; E-Fav, L.A.Z., Noveliss, and producer/emcee Ilajide; these cats rap like genetically enhanced, socially conscious street poets from the 70′s creating a combination of golden era, 21st century, back pack and sub-woofer rap hip hop music all while paying boisterous attention to their beat selection.
Clear Soul Forces the group emerged from the aftermath of a 2009 all-nighter at a studio, where the four emcees scraped up some lose change to get in the studio and record some individual music. Detroit emcee Royce da 5'9", who was finishing recording his album Street Hop was coincidentally working in the studio room next door. The four soon-to-be group members jumped at the chance to be able to kick some rhymes for Royce as they engaged in a 9 hour rhyme fest where Royce just listened, made a few faces, and knotted his head while the four emcees traded bars with one another. Royce was impressed, then he kicked out a suggestion; considering each emcee’s different personality and style he posed that the four men become a group, and that was the day Clear Soul Forces (who didn’t have a name at the time) was born.
By early 2010, CSF began rocking Detroit’s underground hip hop scene and released their debut mixtape Clear Soul Radio, a project that was recorded all in one day. Later in 2010, the groups home studio “The Complex” was formed, and the studio rats released their second project; The Departure EP, just in time for their appearance at the A3C festival.
In early 2011 the group shot and released their first music video for the song "Gon Get Em", off of their latest project, “The Departure EP.” 2011 held trips to Brooklyn, NY, Denton,TX for the “35 Conferette” festival, and SXSW in Austin, TX where the group rocked the Rappers I Know showcase with the likes of Tanya Morgan, H.I.S.D., Just Blaze, The Alchemist, Talib Kweli, and Freeway. Later in the year, the group released videos for their songs "The Greatest", and "Strangers in the Night". By the end of 2011, fueled by the inspiration of a painting on the side of an apartment building, the group began crafting their debut album Detroit Revolution(s). After overdosing on J Dilla, and Slum Village, the group finished the album in just one month. By the end of 2011, CSF had been selected by Red Bull to be featured artist in the Red Bull Soundstage program.
In January 2012, CSF released the video for their lead single "Get No Better", off of their debut album “Detroit Revolution(s)” that was destined for a 3/13/12 release…Detroit! The video for “Get No Better” set the internet on fire, and prepped the world for the release of the groups debut album. In October of 2012, Red Bull flew a film crew out to Detroit to shoot a documentary on the Motown emcees. In March of 2012, the groups debut album “Detroit Revolution(s)” was released at the same time the group was performing at SXSW for the second time. 6 SXSW shows, and 1 album (that has been called a classic) later, CSF has garnered the attention of Hip Hop heads all over the world.