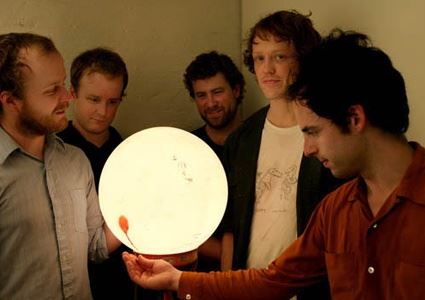 Clap Your Hands Say Yeah are a Brooklyn and Philadelphia-based indie-rock band lead by Alec Ounsworth. Until 2012, the band also consisted of Lee Sargent, Robbie Guertin and Tyler Sargent. The band also featured drummer Sean Greenhalgh until 2014. All the band members attended Connecticut College, in New London, Connecticut, United States.
Their debut album, Clap Your Hands Say Yeah, recorded by Adam Lasus (Genius + Love = Yo La Tengo/the dirt of luck), was self-released in 2005, receiving attention from numerous MP3 blogs and a favorable review from Pitchfork Media, who gave the band a "Best New Music" commendation. The ensuing demand for the album was so great that the band were forced to re-press the CD, as the initial production run was too small. David Bowie and David Byrne were subsequently spotted at some of the band's shows, garnering them even more press. They also received praise from Rolling Stone as the 'Hot New Band' for 2005. On October 3, 2005, they were signed to Wichita Recordings in the UK.
The band released their second album, Some Loud Thunder on January 29, 2007, in the UK, and January 30, 2007, in the United States. On September 18, 2007, Live at Lollapalooza 2007: Clap Your Hands Say Yeah was released on iTunes. It features the band's complete live set from Lollapalooza, professionally recorded on August 4, 2007.
May 2011 brought news the third album, reassuring fans that they had not broken up. The band released Hysterical, produced by John Congleton, on September 12 in the UK, Europe, Japan, and Australia, and on September 20 in the United States. It was announced via a post on the band's official website with a video of the band rehearsing a few new songs from the album in the studio. A vinyl reissue of a remastered edition of the first album, released on June 14, 2011, was also announced. A music video for "Maniac" was made by Belgian director Pieter Dirkx. It was released on September 14, 2011.
On August 1, 2013 Clap Your Hands Say Yeah digitally released their EP Little Moments on their Bandcamp page. It consisted of four songs, two of which were to be included in a different form on their forthcoming LP, Only Run. Little Moments featured a new sound for the band that included a heavier reliance on synths and drum machines and fewer guitars. The band recorded the EP in Alec Ounsworth's home studio, mixing and mastering the EP themselves. Additionally, 500 10 inch vinyl EPs were put on sale on the band's Bandcamp page.
On December 31, 2013 the band announced via email the completion of their forthcoming album called Only Run with a release date of June 3, 2014. Its first single, Coming Down, featured vocals from The National's Matt Berninger.