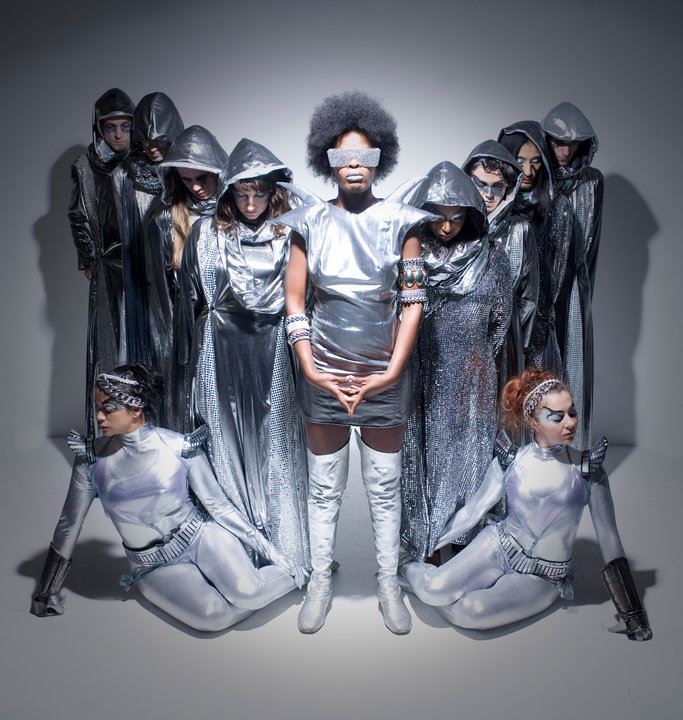 Chrome Hoof are an experimental orchestra based in London, England.
The group was formed in 2000 by Cathedral bassist Leo Smee and his brother Milo Smee. Initially performing as a duo, their music was mostly electronic. Since the start, however, the group have continuously recruited new members playing various instruments. As of 2007, the group have about ten members and instruments such as saxophone, trumpet, bassoon, violin, guitars, bass and drums.
Being a large orchestra, Chrome Hoof's music spans several diverse music genres such as metal, electro, funk, jazz, doom, prog, disco and chamber music. Their music has been described as progressive, futuristic and psychedelic.
It’s taken two brothers, coming from vastly different musical paths to create the futuristic yet earthy Chrome Hoof. Experimenting together as early as 1994, Chrome Hoof really lifted off around ’00. Originally the two members battling it out with bass and drums, quarter inch 4-track, an Atari, sampler and Poly 800 synth. Fastforward to 2007 and they have recruited another eight or so freaks to fill out the line-up and help create the expansive, cinematic sound they hear in their heads.
A little background into their Prog / Doom / Disco sound: In the early years, Leo was rocking to Motorhead, Sabbath, Maiden and dare we reveal Whitesnake. Heavy riffs sodden in bile and downward spirals. Later joining Trespass, then cult Doomers Cathedral - who he still plays for. Milo, on the other hand, was developing a taste for groove-based music - Acid House, Hip Hop and Disco. Going on to produce freakbeat electronics and remixes under the name Kruton, and starting 5 Mic Cluster (later to sign to Output Records) with fellow techno producer Mark Broom. Their common ground came through their love of forward thinking bands such as Faust, King Crimson, This Heat, Brain Ticket etc. They have been consolidating seemingly opposing influences ever since - and perhaps best crystallising their work with the mon-u-frikking-mental 'Pre-Emptive False Rapture' album.
Their rep for the live shows doesn’t JUST come from the costumes, stunt men, props and mayhem. On drums, we have a burnt out raver (who’s convinced the best years are yet to come) with an insane drive to nail the ultimate disco beat - however much it seems to elude him - mixing it up with stuttering progressive break-downs in some un-holy time signature. Then a bassist, whose fingers blur like knitting needles on cheap speed - pulling up low end from the very foundation-stone of the cosmos, together creating a furnace of restless Disco-Grind. Now bring in the rest of the band armed with bassoon, sax, trumpet, keyboards, violin, cello, percussion, samplers, guitars, bass, drums - and five or six vocalists tackling sprawling, obelisk-like arrangements with consumerate ease and attention.
Never having had a manager, other than the brothers own trial and error and seven years word of mouth, Hoof were never a band interested in pandering to the mainstream. There have been some key moments: Touring the USA with Sunn0))), supporting Add N to X’s last ever show, accidentally filling in a spot at a metal NYE bash in Holland and headlining Tapestry Festival for three years running. Fresh from freaking out teenagers at 2007's Camden Crawl festival (bewilderment is a reaction they are more than used to) and they were personally asked by the band to support the Klaxons in May 2007. Early on they were championed by Andrew Weatherall - one of the few who ‘got’ what they were doing.
Release wise, they put out their own 'Broken Claw' EP in '02, had an album on Tritone in '03, remixed a Test Icicles track for Domino in '05, an extended EP on Rise Above last year and the aforementioned album coming out on Southern soon. There are many things that set this band apart - experience, attitude, risk-taking, an overcultivated taste for the eccentric whim, but most importantly embracing their various nemeses with unconditional jealousy. Infinity is a harsh mistress, my friend.
Members:
Leo Smee - Bass/Vocals/Synth/Percussion
Milo Smee - Drums/Synth/Percussion
Emmett Elvin - Keyboards/Synth/Sampler
Andy "Mr. Custard" Gustard - Guitar/Percussion
Kavus Torabi - Guitar
Emma Sullivan - Trumpet/Vocals/Keyboard/Percussion
Chloe Herington - Bassoon/Saxophone/Percussion
Sarah Anderson - Violin
Lola Olafisoye - Vocals
MySpace:
http://www.myspace.com/chromehoof