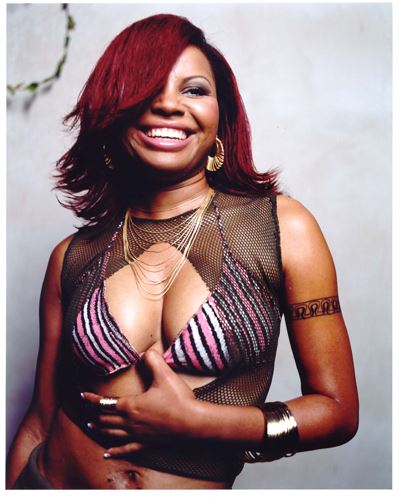 1) Style, wit, grace, intelligence, creativity and flare for controversy are all key components for a budding diva. Add a bit of sexiness, a lethal body and stunning smile along with a large measure of talent and you've just defined the allure of Ce'Cile - Dancehall Diva.
This self proclaimed 'Bad Gyal' has kept people guessing and tongues wagging since first captivating the Dancehall scene with the shockingly refreshing and thought provoking smash "Changez" which was designed as a marketing ploy by poking fun at her male counterparts. Ce'Cile takes up for women and makes no apologies. Boldly demanding that men "Do It to Me", this eye candy knows how to get her point across and isn't afraid of the backlash adherent to pro-feminine declarations and subjects deemed taboo in her home country Jamaica.
Ce'Cile's polished sultry sound has been widely recognized as she was recruited to perform Mya's verses with Beenie Man at the BET Harlem Block Party in 2001 and with the bevy award nominations she's received over the years which include capturing accolades for; the Irie Jam Radio Awards, Jamaican Federation of Musicians, Martins International Reggae Music Awards, South Florida Reggae Awards, Stone Love Awards, Star Awards, Richie B's awards, Tamika Awards and more. She's been one of the few Dancehall artists to receive mainstream recognition and be featured in Source Magazine, Vibe Magazine and XLR8R Magazine.
Ce'Cile's unique style enhanced the song "Can You Do The Wuk" with Sean Paul featured on his platinum selling "Dutty Rock" album. She was recruited to perform this song on legs of his tours throughout 2003 including "the pre-award" party held for the Europe MTV Awards. Ce'Cile also yearly tours Europe, United Kingdom, USA and the Caribbean bringing her fresh style to all audiences. Ce'Cile's style is so distinctive that women in Dancehall behind her have patterned themselves after her.
Being a business savvy individual whose ingenious self-promotions got her thus far, Ce'Cile continues to sell her music to all who will listen and was one of the first artists with a stellar website found at; http://www.cecileflava.com. In 2003 she signed a record deal with Delicious Vinyl Records, choosing to work with an independent label hoping for more focused efforts. Sadly, this situation didn't work out and she's since departed ways with the label.
Her song "Do It To Me" and "Bare As She Dare" with Canadian artist Carl Henry on Dancehall's top COOLIE DANCE rhythm expanded her wide exposure and success. Other hits singles include "Man a Man" a collaboration Shaggy on the Striptease Rhythm, "Got Me Going Crazy" with G-Unit's Olivia for Olivia's upcoming album, "Loser" feat Lady Saw (also featured on Lady Saw's strip Tease album) and "Rude Bwoy Thug" life, a hip hop charting smash hit in Germany.
Ce'Cile has been very selective in recordings, not always on all of the new riddims that pour out of the streets of Jamaica. Some of her sizzling new releases includes; "Hot Like Dat" from producers Leftside & Esco, "Johnny" from talented producer Skatta, "Faking" by the South Rakkas Crew, "Didn't Know" recorded by Danagazone Productions and "Phattified" from King Jammy's talented stable/son Jam 2. In addition, Ce'Cile is continuing to record more self produced tracks. Be on the look out for "Settle Pan It" and "Kitty", to be released soon.
2) Tradition Meets Innovation
All good things come in fours! Four elements of Cecile.
Authenticity, variety, brilliant songwriting and 110% power stage. Earlier, the Paderborn Quintet was perhaps the nice boy band of the neighboring block, write this Chris, Mario, Alex, David and Jan modern songs in our own factories with the potential for hits hits and hits.
Cecile whether from the mouth of the Paderborn guys as pop,
Rock or metal are known, it does not really matter.
As impressive as the demo songs on the first EP are the Cecile from her pocket magic, categorization has only earned B grades. Muscular guitar playing competently mingle with
deep bass and electric sounds to emphasize the brilliant symbiosis of synaptic connections. On a carpet of the instruments as the audience gets whipped cream or the entire portion brute emotions through shouts, screams, singing, singalongs and the whole Tätäräaaa!
Cecile does her thing. And that's good. Straight to the
Bulldozer through all the walls will be free to blow Cecile 2011, all ears in Germany again and show that they do not band Nr.1001 ... is!
How was that even with the 110%? Who the interaction of the 4 elements as melancholy and play combined, and can also be pressed into a distinctive shape, it is to be heard worth. The musical spectacle Kanninen color and are really directly on myspace.com / cecile considered rock.
2011 is the year of the 4 elements!