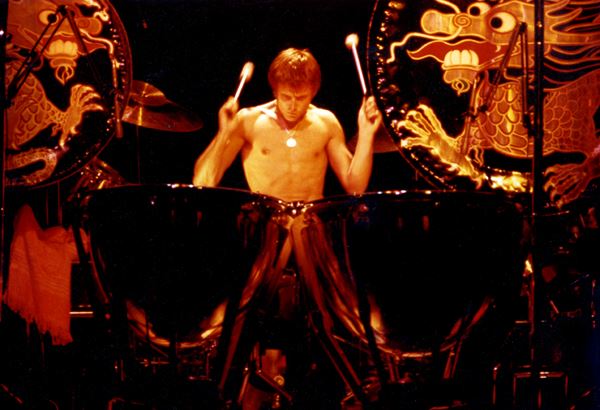 Carl Frederick Kendall Palmer (born 20 March 1950 in Handsworth, Birmingham, England, United Kingdom) is an English drummer and percussionist. He is credited as one of the most respected rock drummers to emerge from the 1960s. In addition, Palmer is a veteran of a number of famous English bands, including The Crazy World of Arthur Brown, Atomic Rooster, Emerson, Lake & Palmer, and Asia.
Palmer met up with two other young English musicians, Greg Lake, and Keith Emerson. The three felt an "immediate chemistry", and by 1970 they had formed a band. In naming the new group, the trio chose their last names alphabetically - Emerson, Lake & Palmer, also shortened to ELP. The band was arguably the most successful band of Palmer's career and he remained with ELP until they eventually disbanded in 1980. They developed a sound that merged art rock, jazz, electronica, pop rock and classical music and found fans within their peers and the public alike. During that time Palmer released only one single as a solo artist but went on to develop a solo career, alongside ELP and his other future bands. Emerson, Lake & Palmer subsequently reunited in the early 1990s and played the progressive rock circuit, especially in outdoor summer concerts. They also released two new studio albums. In 1998 the members of ELP had a rather acrimonious falling-out and Lake left the band.
Palmer rejoined the newly reformed ELP in 1992 for Black Moon, In the Hot Seat, a box set, as well as several DVDs and the subsequent tours. A one-off ELP performance at the 2010 High Voltage Festival celebrated the 40th anniversary of forming the band.
Following the 1998 break-up of ELP, Palmer worked with Asia's John Wetton in the band Qango, and subsequently toured with his 'Carl Palmer Band' featuring Paul Bielatowicz on guitar and Stuart Clayton on bass. In addition to these tours, he has released four "new" albums, most notably Working Live Vol. I & II as well as an anthology album.
In recent years, Palmer has performed a series of drum clinics across the UK, Europe and United States. Highlights of Palmer's live drum solo over the years have included the use of both gongs and tambourines, and also his ability to extract himself from his t-shirt while playing complex double bass drum patterns; the latter leaving him stripped to the waist to play the final part of his show. The removal of his shirt was a major attraction in Palmer's drum solos during the 1970s, 1980s and 1990s. On recent tours, however, his shirt has remained on throughout his performances. Palmer is a patron of the British 'Classic Rock Society', which promotes Progressive Rock concerts.
Palmer has been reunited with the original line-up of Asia since 2006. They celebrated their 25th anniversary, and have since released 2 new studio albums, Phoenix, in 2008, and Omega in 2010. A live album and DVD from the 2006 reunion tour, entitled Fantasia was released by Eagle Rock Records. Asia are currently finishing their next studio album entitled XXX.
In 2013 Palmer is on world tour, that includes shows in South and North America, and Europe. For example, he played in Montevideo, Uruguay, for the first time on April 7. The Palmer's tour band is a trio, with him on drums and percussion, guitarist Paul Bielatowicz and bassist Simon Fitzpatrick.