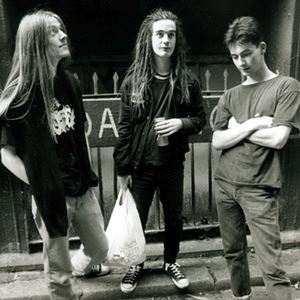 Carcass is a death metal/grindcore/melodic death metal/death n roll band formed by Napalm Death guitarist Bill Steer together with drummer Ken Owen in 1985 and is considered by many to have been one of the most influential and talented bands within the extreme metal scene.
Carcass was originally based in Liverpool. On their first demo, Sanjiv contributed vocals. In 1987, bassist and vocalist Jeffrey Walker, formerly of the Electro Hippies, joined them.
The band focused on topics mostly relating to the medical field and bizarre combinations of medical equipment and chemicals with human anatomy, such as "Intenacious, intersecting / Reaving fats from corporal griskin [...] Skeletal groats triturated, desinently exsiccated". This lyrical focus led many in the music press to falsely believe that one or more members of the band had studied medicine. There is more evidence to show that this lyrical focus was a method of pushing vegetarianism (For example, "Exhume To Consume"). Typical Carcass song titles from their early work include "Lavaging Expectorate of Lysergide Composition" and "Microwaved Uterogestation."
Having started their career as a goregrind band, Carcass gradually changed their sound and lyrical content. Starting with the album 'Necroticism - Descanting The Insalubrious', the careful listener could hear music-theoretic experimentation beyond the amodal noise of previous work, and even a hint of the harmonic minor scales that would later crystallise more fully. Their best-known album, Heartwork, was largely devoid of the gory lyrics and grind style that had been present on their earlier recordings, with a cleaner, more melodic sound, but retaining occasional forays out of more complex harmonies into atonal grind.
With Carcass having signed to Sony before the release of Heartwork, some fans regarded the evolved sound as proof of the sellout they had expected. In contrast, many were very receptive to what was perceived as a new zenith of talent and composition in death metal, showing a command of motif development and harmony that is underappreciated even within the metal community. In fact, today some credit Carcass with being a very early founding influence for not just one, but two genres of metal - grindcore (or, more specifically, goregrind), and the melodic death metal sound. Michael Amott left the band right after Heartwork was recorded and was for a while replaced by Mike Hickey who was later replaced by Carlo Regadas. Carcass broke up in 1995 after releasing Swansong, which drew some criticism from fans for its melodic riffs which in some ways bordered on late 1980s thrash.
Ken, Jeff and Carlo continued with the Blackstar project accompanied with former Cathedral bassist Mark Griffiths. Blackstar (Later Blackstar Rising) went defunct after Ken suffered from a severe brain haemorrhage. Michael Amott went on to found hard rocking combo Spiritual Beggars and the melodic death metal band Arch Enemy.. In the biggest musical departure, Bill Steer reappeared in Firebird, a Claptonesque guitar-rock trio.
In June 2006, in an interview with Walker, he discussed the possibility of reforming Carcass. In September 2007 it was confirmed by Michael Amott that he had been rehearsing with Bill Steer, Jeff Walker and Daniel Erlandsson (replacing Ken Owen, who is incapable of playing a full set with Carcass due to health reasons) in secret to rehearse old Carcass songs for a possible reunion tour. The original plans were to play at several festivals during the summer, but they couldn't meet the deadlines.
In October 2007, Carcass were confirmed to play at German heavy metal festival Wacken Open Air and Finland's Tuska Open Air Metal Festival in 2008. Carcass later embarked on a reunion tour, beginning on June 6, 2008. Carcass also played at Hellfest Summer Open Air, Metalcamp and several other festivals. The band toured Australia and New Zealand in 2008, and then in North America during September and October 2008, followed by the band's first South American tour, playing in Colombia, Chile, Argentina and Brazil.
Carcass continued to play live in 2009, with a North American tour completed in March 2009. Carcass also headlined the Bloodstock Open Air in Derbyshire, England in August 2009.
In August 2010, Carcass headlined Vagos Open Air in Vagos, Portugal and Jalometalli Metal Music Festival held in Oulu, Finland. At Hellfest 2010, they performed the Necroticism album in its entirety.