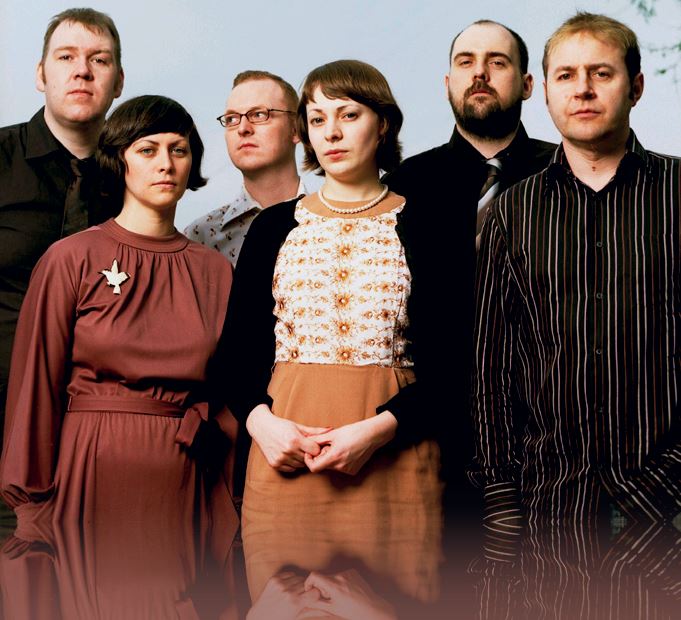 There are at least four artists with this name
1. An indie pop band from Scotland
2. A synthpop group from the United Kingdom
3. A hardcore punk band from the United States
4. An electronic music group from France
1. Camera Obscura is an indie pop band which formed in 1996 in Glasgow, Scotland. Currently the band consists of Tracyanne Campbell (vocals, guitar), Kenny McKeeve (guitar), Gavin Dunbar (bass) and Lee Thomson (drums). Keyboardist Carey Lander was a member of the band from 2002 until her death from bone cancer in 2015.
The band was formed in 1996 by Tracyanne Campbell, John Henderson, and Gavin Dunbar and released their debut album Biggest Bluest Hi-Fi in 2001. Camera Obscura released a second album, Underachievers Please Try Harder, the following year, and in September, 2005, the band started recording their next album, named Let's Get Out of This Country, with producer Jari Haapalainen. This album was released on June 06, 2006 and appeared high up in many critical lists of the 'best albums of 2006'.
In November 2008, the band announced that they have completed recording the follow-up to Let's Get Out of This Country, and that the new album would be released in 2009. In February 2009, it was announced that the band had signed to the label 4AD, who released their fourth album, called My Maudlin Career, on April 20, 2009.
http://www.camera-obscura.net/
2. Camera Obscura comprised Nigel James and Peter Oldroyd, and hailed from the UK. The band formed in 1982 and soldiered through record label hardships until 1987, when they went on indefinite hiatus.
‘Destitution’ and ‘Race in Athens’ became the duo’s first single on Small Wonder Records in the spring of 1983, followed by ‘Village of Stars’ b/w ‘Insect’ for the B-side, in London, at the Atmosphere studios on Wardour Street . These tracks were never released and sadly the masters have not survived.
Camera played live extensively at this time and they soldiered on into 1985 with a 4-piece line up (Gary Scargill and Rob Gospel were added) and the Quartet formed Paradise Now in ‘86. Nigel left in ‘87 and was replaced by Steve Wright from “Fiat Lux”. Sadly the band ended there. However, Camera Obscura never officially split up. In 2005, Nigel and Peter dusted off their old material and took to playing shows throughout Europe, finally releasing their lost classic Horizons of Suburbia. All recent Camera Obscura material has been released by German label Anna Louge Records.
http://www.annaloguerecords.com/releases.htm
http://clancamera.com/
3. Camera Obscura is not pulling any punches: they're out to rock you so hard you fall onto the dance floor. The band launches its aural attack using an arsenal comprised of Michelle Maskovich's squealing keyboards, Duane Pitre's mountains of guitar squiggle, William Lamb's thunderous drums, and Russell White's urgent-yet-muffled vocals. Like a dance party during a tornado watch, Camera Obscura throws caution and moderation out the window in favor of thrilling, adventurous sound combinations.
Camera Obscura formed in '98 in San Diego, incorporating members of The Shortwave Channel, The Interstate Ten, and Spanakorzo. The band self-released a seven-inch (now in its fourth pressing on Three One G Records) in October '98 and went on its first U.S. tour in January '99. More touring and recording followed, leading up to the release of their first full-length, 2000's To Change the Shape of an Envelope, on Troubleman Unlimited.
http://www.epitonic.com/index.jsp?refer=http%3A%2F%2Fwww.epitonic.com%2Fartists%2Fcameraobscura.html
4. 1. Project active in 1982 from Die Form founder, Philippe Fichot. He released three cassettes under the moniker: "1 - "Terrains Vagues"", "2" and "3/Final Edition". Further information can be found here: http://www.discogs.com/artist/Camera+Obscura+%283%29