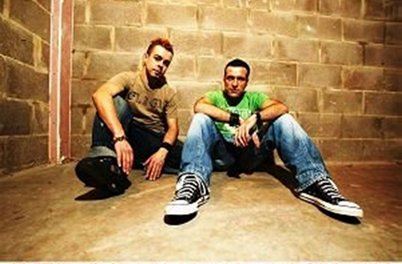 It is impossible to mention Hard Dance in the UK without bringing Cally & Juice into the conversation. Their clever and unorthodox style behind the decks has won them many admirers around the globe and their constant re-writing of the rules keeps people flocking to the front of the decks to see what they’ll be doing next. Whether it?s frantic scratching over drum & bass or hip hop beats, scratching with feet, blindfolded scratching or even hand-spins on the decks, you can guarantee these boys will keep you entertained.
In the UK they keep one of the busiest DJ diaries, and average around 3-4 gigs per weekend, with as many as 6 gigs some weekends. They play for the likes of Creamfields, Gatecrasher, Godskitchen, Slammin’ Vinyl, Frantic, Tidy, Helter Skelter, Dreamscape, Slinky and Polysexual to name but a few. Overseas they have played for events such as Defqon.1 (Q Dance, NL), Impulz (NL), Eden (Ibiza), Manumission (Ibiza), Esparadis (Ibiza), Beachbop (NL), Masterdome (LA, USA), The Tunnel Club (Germany)The Nile (Phoenix, Arizona), and have toured Taiwan. They have also just been signed to Steve Hills prestigious Masif DJ’s agency with tours planned for Australia, New Zealand, South Africa and Canada in the very near future.
On the production front, since parting company with Nukleuz two years ago, the boys have launched their own label to push their unique sound, which they simply describe as “our own fusion of hard trance and hardstyle with elements of drum & bass, old skool, hip hop, and any other genre that influence us thrown in for good measure”. The label, aptly named “Ourstyle” completely sums up not just their production ideas but also everything they’re trying to contribute to the scene. Their first three releases, “Do It Like That”, “Serotonin Rush” and “Jam Master” have enjoyed very good sales but more importantly for the boys, critical acclaim from DJ’s and clubbers alike. 2008 will see the boys concentrating on their label a lot more with the next 2 or 3 releases all ready lined up- watch this space!
In the past the boys have also collaborated with the like of Activator and The Trance Generators. These very successful collaborations are set to continue. They have all ready joined forces with Steve Hill on two tunes which are set to prove to the World that they are serious producers as well as DJ’s. Their interpretations of “Insane” by Dark Monks and “(I Just Wanna Call You My) Bitch” by are ripping it up big time on the worlds dance floors and are due for release on Masif Records in late 2007/early 2008. Further collaborations are also in the pipeline with Germany’s finest Sam Punk.
On top of all this they still find the time to run their own events. Cally runs the internationally renowned Bionic with co-promoter and resident Brian M and Juice runs West Wales’ no.1 hard dance event Breathe, both of which are into their 7th year. Their highlights of promoting have being hosting arenas for the likes of Escape Into The Park, Godskitchen, the Metro Weekender and the 10,000 capacity “WestFest” event run by Slammin’ Vinyl.
With all that under their belts the boys show no sign of slowing down. Their passion and hunger for their work is stronger now that it was when first started playing back to back 10 years ago. If you’ve seen them playing out recently you’ll know what I’m talking about. If you haven’t seen them out recently, make it a priority-you won’t regret it!!!
In the words of Cally & Juice Rock on!
more: CALLY & JUICE - The DJ List | TDJL http://thedjlist.com/djs/CALLY_&_JUICE/#ixzz0iZV0HSLk