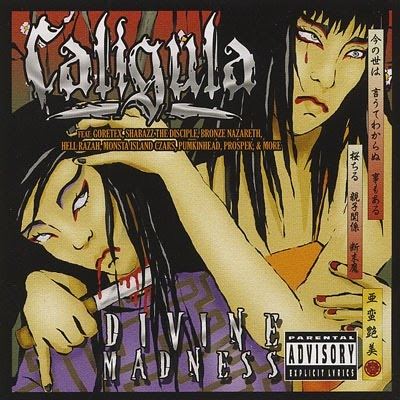 Caligula refers to several bands active or not. (see below for the different bands)
For the Belgian Avantgarde Metal band, see http://www.lastfm.fr/music/Caligula+%28BE%29
1. Caligula were a band from Sydney, Australia, which briefly rose to fame during their 1990-1994 presence on the Australian music scene, combining elements of Australian retro-rock (a style made famous by The Hoodoo Gurus) and grunge with electronic-tinged production.
They were played on both alternative and mainstream rock radio across Australia and had three ARIA-charting singles, Tears Of A Clown, Roundabout and ICU. They released three EPs, including "The Bluff" (1992) and "i.c.u." (1993), and two albums, "Got One" (1990) and "Rubenesque" (1994). They also had a song, "Wardrum", featured on the 1991 rooArt "Young Blood 3" compilation.
They disbanded in 1994 following the departure of vocalist Ashley Rothschild and the members formed or joined other Sydney bands including Def FX, Primary and World Inc.
2. Caligula is a US Hip Hop artist known for his release 'Clone Killer'
3. Caligula was a US thrash/crossover band based out of Queens, N.Y. that existed from 1985-1988. They recorded three demo tapes during this time, but it was their self-released "Technical Aggression" (1987) which garnered them the most recognition from the thrash scene.
The band was started by Rob Garbarino (bass), Chris Deleo (guitar), Ed Klinger (drums), Vinny Vermette (vocals), and Tommy K (guitar). By 1986 Vermette and Tommy K had left the group, and they were briefly replaced by Whiplash's Tony Portaro on vocals/guitar when Whiplash's Tony Scaglione left to join Slayer. Upon Portaro's eventual return to Whiplash, the group decided to go with one guitar and joined forces with John Scherer (Deathrash) just before recording "Technical Agression".
After the demo's release, they began to build a large following through the under world of tape trading and playing shows with thrash and hardcore notables such as Agnostic Front, Prong,Biohazard ,Sick Of It All, Token Entry, Hallows Eve, Sheer Terror, Deathrash, Dept. C, and many others.They were also featured in a number of magazines including Kerrang!, Metal Mania, and numerous underground zines.
http://www.myspace.com/officialcaligula
4. Caligula is a Death Metal band from Raleigh, North Carolina established in late 2009.
Their first studio release was a demo completed in 2010 titled "37 CE: Volume I" and it is available for free download. The follow up should be completed by or before 2011.
http://www.CaligulaBand.com/
5. Caligula was a technical metalcore band from Cleveland, Ohio who signed with United Edge Records in 2004. During their brief run, they released one EP entitled "We Burn Bridges" on that label. After their vocalist left in 2004 and facing other troubles, they decided to call it quits in early 2005, leaving the band members to approach new musical directions.
6. CALIGULA is a Dubstep DJ/Production duo consisting of Damaged Goods & Mikey Millions aka Grand Larceny from Miami, FL. started in early 2010.
http://theoverthrow.com/site/caligula
7. Caligula is a an avantgarde metal band from Belgium, active since 2008.
After numerous shows in Belgium, the band have released their first album, "Not Too short to be great", with a very good feddback from several webzines.
More information here: http://www.myspace.com/caligulabelgium