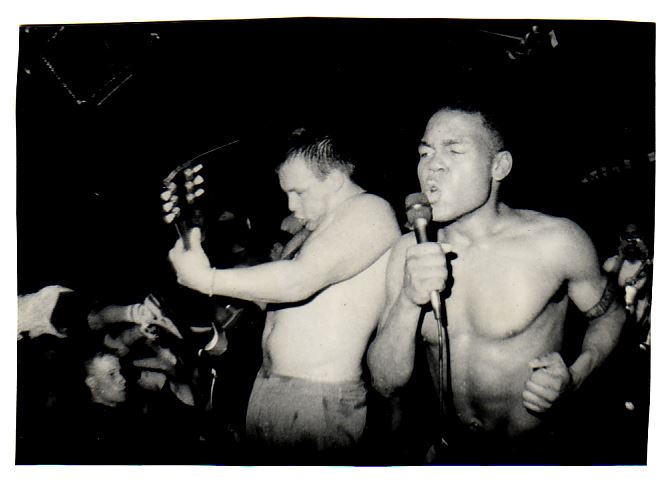 There is more than one artist with this name.
1. Burn was a New York hardcore band which began in 1988 playing what could be considered progressive hardcore music with introspective lyrics. Burn released its first self-titled EP in 1991. In 1994, the band separated, with vocalist Chaka Malik forming Orange 9mm, guitarist Gavin Van Vlack participating in Pry and Die 116, and Alan Cage in Quicksand. The band never "officially" disbanded, and after a stint of live performances, Burn was finally resurrected with the addition of guitarist Vic DiCara (from Inside Out) and (from Beyond and bassist Manny Carrero (from Glassjaw). In late 2001, Burn released a new EP on Equal Vision Records, Cleanse. In 2002, the band dropped a previously unreleased recording from 1992 on Revelation entitled, Last Great Sea, due to fans seeking out the tunes which had been circulating among fans from a demo.
2. In 2007 they won the "Geheim van Starsound", "Metal Battle" Utrecht and appeared in the finals of the "Grote Utrechtse Live Prijs" (Utrecht’s Big Live Awards). A young, but already impressive, live-band!
Tougher than Hard Rock with more melody then Extreme Metal; it’s melodic Heavy Metal that binds a metal and mainstream audience. Tied together by the strings of hard rock and heavy metal, five young dudes rock your balls off. Original, unique and with a fresh sound among the rock and metal bands of today. Refinement and virtuosity go hand in hand with a great show and awesome guitar riffs.
3. Burn is also a German new wave band, influenced by sounds of the 80s. Current EP is called 'Cold Flames'. For more info check out www.burnmusic.de
4. Burn is also a hard rock band from the United Kingdom. After an enforced sabbatical, Burn return to the hard rock stage with their third album - Global Warning.
Based in Leicestershire, in the heart of the UK, Burn emerge regrouped and recharged with a harder sound but retaining all the stomping melody that brought their debut album So Far So Bad rave reviews (a 5K from Kerrang and 9/10 in Metal Hammer) back in 1993. From young upstarts in the 90s, Burn have matured and realised their song-writing and performing potential with this imminent CD release.
There have been many twists and turns in the Burn story since those heady days... At the time they formed in 1991, Burn were riding a wave of punchy melodic rock. Releasing a successful debut CD in 1993 against the onslaught of grunge was never going to be easy, but they stuck at it. Writing and gigging, they released the follow up to So Far So Bad, 1995's Spark to a Flame, which, while never quite catching the imagination of So Far..., nonetheless remains a solid offering.
Midway through the recording of a third album in 2001, tragedy struck when drummer Karl Bee was killed in a motorcycle accident, plunging the band, together since college days, into freefall. This sad loss was akin to losing a close family member and questioned their drive to continue.
The following year the band recruited Robbie 'Vom' Morris from Leicester Goth/Punk lunatics Crazyhead. Robbie jumped in with both feet and kept the boys gigging while they pondered their future. Additionally, long-time guitarist Rab Devenney decided he had lost the desire to continue and hung up his instrument to gather dust...
After a chance meeting in 2004, and with a multi-track recorder containing what amounted to half of a still-born third album, Burn recruited local Vai-Malmsteen-Gilbert-Van Halen-rolled-into-one axe maestro Julian Nicholas and ex-Alien songwriter/guitarist Phil Hammond to work on the embryonic ideas, inject some new direction and renewed enthusiasm. Furthermore, early in 2006, Burn enlisted legendary drummer Benjy Reid III (Ted Nugent/Praying Mantis/Debby Bonham) to complete the line-up.
Fast forward to late 2006 and Burn are indeed rejuvenated. A year spent recording and infusing the new ideas into the remaining core of Burn - vocalist Jeff Ogden, keyboard player/producer Barney Stackhouse and his brother, bassist Marc Stackhouse - has resulted in easily Burn's best material to date.
Burn have moved away from the ubiquitous 'chicks, bars and cars' themes of hard rock's somewhat superficial past and delved deep, questioning the whole subject of who we are, who we trust, and why, in these dangerous times.
The band have honed their art and produced a crossover album that can hold its head high in terms of both pure melodic rock and classy, bluesy metal. With the fashionable resurgence of virtuoso players and proper rock singers, Burn have come up for air at a most opportune time.
Burn are currently rehearsing their new material for some upcoming warm-up gigs with a view to working some high-profile supports and regional festivals into their schedule in the summer of 2007.
5. Burn was a Swedish heavy metal band that gave out one self titled full length album in 1983.
6. burɴ is a Trip Hop duo from England. Founded in 2013, burɴ wrote, recorded and released their debut album haute obscure within six months and only meeting in person three times.
http://burnmusic.bandcamp.com/album/haute-obscure
http://www.facebook.com/burN.uk13/