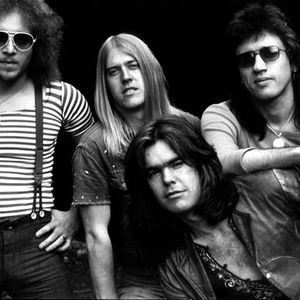 There are multiple artists named Buffalo:
1) A heavy metal band from Australia
2) A heavy stoner metal band from Argentina
3) A heavy metal/NWOBHM band from England.
4) A heavy alternative rock band from Logan, Utah, USA.
1) Buffalo are a proto-heavy metal band formed in Sydney, Australia in 1970, although initially performing under the name Head (changed the following year, due to its sexual innuendo and unmarketablity). The original line up was unconventional for a rock band, featuring two lead vocalist (Dave Tice and Alan Milano) and filled out by John Baxter (guitar), Peter Wells (bass) and Paul Balbi (drums), although their difinitive line up (1973-1975) was more conventional with Tice, Baxter and Wells with the addition of Jimmy Economou on drums.
Although largely unrecognised within the Australian music scene, they were possibly Australia's first heavy metal band, pre-dating other pioneering Australian hard rock and heavy metal acts - notably Coloured Balls, AC/DC, The Angels (Australian) and Rose Tattoo, of which Wells was also a founding member. Like many pioneering heavy metal acts, Buffalo incorporated strong influences of blues-rock, psychedelia and progressive rock - the latter genre also frequently used by many critics and fans to label the band's style. Like most Australian bands at the time, Buffalo's bread and butter was a constant grind of national touring, running the full gamut from school dances in tiny halls to large outdoor concerts. Overall, the band's sound is comparable to Black Sabbath, whom they supported during an early '70's tour.Rather more than apocryphal evidence suggests Black Sabbath were none too pleased with the band's exceptionally loud, energetic performance, nor the crowd's overly enthusiastic reception and numerous calls for encores. Indeed,one rock magazine featured the headline "Sabbath Blown Offstage"
Despite being signed to a major label (Vertigo Records - the first non-European or British act to do so) they would remain an underground band. This was largely due to a lack of airplay on radio, with commercial radio virtually black-listing the band, and the non-existence of public radio stations in Australia such as Triple J and 3RRR until the mid-1970s. Also, their controversial artworks for their albums Volcanic Rock (1973) and Only Want You For Your Body (1974) (regarded as their two masterpieces) also saw some record chains refuse to stock their albums. After 1975, the band underwent various line-up changes and a musical decline on their recorded output, eventually disbanding in 1977. Buffalo has however left a legacy with Australia's heavy metal, pub rock and alternative rock movements.
Recently their catalogue has been re-released, in a re-mastered and extended form, by Aztec music in Australia.

2) From Buenos Aires, Argentina. Once Claudio (a.k.a El Pastor) left argentinean stoner rock band Natas he began several projects, like Manso Jeremías (an extreme metal band), Sandiablo (a stoner rock group), Gallo de Riña (He is the drummer of this Sludge band) and an electronic project in the vein of Massive Attack. After a while, the latest Sandiablo songs end up in Buffalo's setlist. At that point, Claudio has the songs, but no band. So he called a long time friend, drummer Alfredo Felitte (former Taura's drummer and current Thee Coronados drummer). Javier Libreiro (former Stonerwitch) was selected to take care of the bass duties. At the end of 2002 the band recorded their first album, "Temporada de Huracanes" , where they show their unique mix of stoner/metal/70s rock. Listening to "Temporada de Huracanes" you can listen to some Kyuss, Metallica, Zakk Wylde, QOTSA, Danzig and even ZZ top influencies. "Temporada de Huracanes" is the first release of the argentienan label Dias de Garage Records.
The year 2006 brought a new album for Buffalo. Its title is "Karma" and the band is intensely touring at this days with Claudio in guitars and vocals, Xoni at bass and the new drummer Marcelo C.
3) Buffalo was a heavy metal/NWOBHM band formed in Accrington, England in 1977. After releasing a handful of demos and singles, they became inactive in the mid 1980s. They reformed with various lineups during the 1990s. A best of compilation was released in 1999, and a full length album of old recordings (Ride the Beast) was finally released in 2006. Official website.
4) Buffalo is an incredible up and coming band made up of a rowdy gang of hoodlums who hail from Logan, UT. They are the Buffalo of choice.