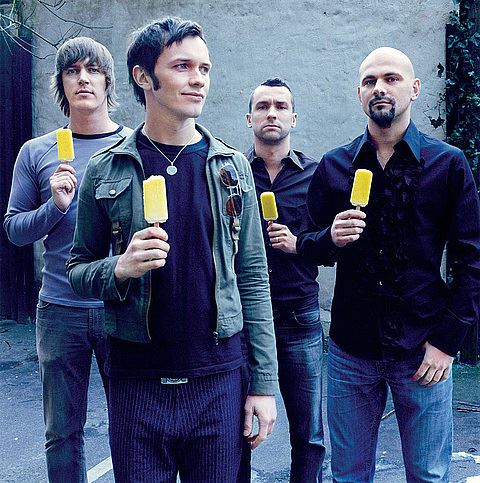 The next album, "Downburst", was released in january 2008. The album was recorded in Wolfsburg. They also changed the producer (Sascha Paeth). They got a bit away from the soultemptation/liquid monster sound.
The line up changed during this record too. Andreas Mailänder quit the band and was replaced by Antonio Ieva.

Only one and a half year later they released a new album called "Memorial Roots". This album was also recorded in Wolfsburg. Many songs are in mid-tempo.
Many people complain about the light sound on this album but this album still contains typical brainstorm songs.
Current Line Up:
* Andy B. Franck – vocals
* Torsten Ihlenfeld – guitars, backing vocals
* Milan Loncaric – guitars, backing vocals
* Antonio Ieva - bass
* Dieter Bernert – drums
Former Members:
* Marcus Jürgens (vocals)
* Andreas Mailänder (Bass)
---
3) Brainstorm is a genre-bending experimental pop group based in Portland, Oregon. A unique mixture of guitar-based art-rock, Saharan desert-blues, marching-band music, and old American spirituals, they skip playfully across borders and styles. Portland's Brainstorm consists of Adam Baz and Patrick Phillips who, between just the two, play electric guitar, drums, tuba, synth, and sing. They released their debut album "Battling Giants" on Lasercave Records in 2009.
In Fall 2010 Brainstorm released a 7" EP, "Beast in the Sky" through up-and-coming Portland label High Scores & Records. The Portland Mercury describes "Beast in the Sky" as "an indie rock sound approached from a bird's-eye perspective—and leavened with Old Weird America, white-kid math, African blues, instrumental post-rock, and classic soul." Baz and Phillips supported the record on a successful US tour with label-mate Jeffrey Jerusalem in October.
4) Brainstorm was an American funk and R&B band, based in Detroit, Michigan in the late 1970's. Their debut album, Stormin' , was their best selling album, and was released in 1977 on Tabu Records. It contained the disco hit single "Lovin' Is Really My Game". The album also contained the radio hit "This Must Be Heaven", which is considered a soul classic.
The members of the band (on the Stormin' album) were Belita Woods, Chuck Overton, Lamont Johnson, Ranel Gonsalves, Treaty Womack, Bob Ross (a.k.a. Professor RJ Ross), Jerry Kent, Jeryl Bright, and Larry Sims. Future Wham!/George Michael bassist, Deon Estus, was also a member of the band for a time.
Members of Brainstorm continued their musical careers with other bands. Woods later went on to perform as part of the Parliament-Funkadelic collective in touring sets around the world. Sims became the trumpeter for the Sounds of Blackness, which won two Grammy Awards during the 1990s. Bright went on to play trombone with the funk band Cameo for over twenty five years, and later released an album with other former Cameo members Aaron Mills, and Thomas TC Campbell, known as MCB (which was also the title of their album).
5) Brainstorm were also a German band in the 1970s that played a vuagely Canterbury-influenced type of music. Zappa too is also an influence. This can be heard in the jazzy songs and complex arrangements, as well as the general humor of the band.
6) Brainstorm is also an alias of Richard Melville Hall (Moby).
7) Brainstorm were a Avantgarde Doom/Death metal band from Sumy, Ukraine active in 1992. They recorded live at "Day of Darkness III" July 6, 1995 in Gomel which was released on a 7"
vinyl. The band formed in 1992 under the name of Temptation, they soon changed for Brainstorm (Ukr) till 1997, since 1997 they are called Graal. Under "Brainstorm", they released a demo and an EP in the mid-nineties.
8) Brainstorm Is an emcee from Seattle. He is a member of the group Dyme Def and makes beats as well. He won the Redbull Big Tune beat battle in 2007.
9) Brainstorm was a hardcore band from Salt Lake City, UT in the late 80s to early 90s. They released a demo and a self-titled 7". Members went on to Iceburn.
10) Brainstorm was a death metal band from Shumen, Bulgaria, active from 1994 to 2001. They released two albums - Pieces From Reality in 1998 and Weeds of Society in 2001.