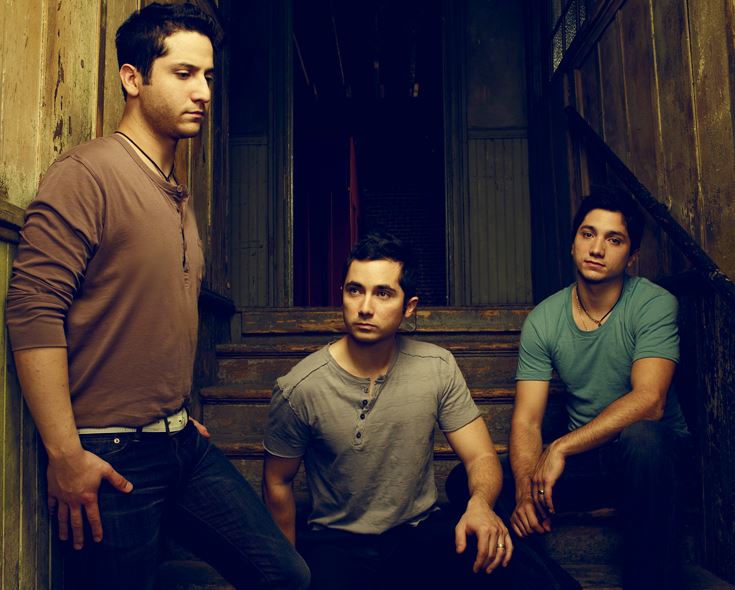 Boyce Avenue, a Sarasota, Florida-based band popular for its strong acoustic roots and melodic rock sound, consists of the three brothers Alejandro, Fabian, and Daniel Manzano. The band first came together in 2000, when Alejandro (lead vocals, guitar, piano) and Fabian (guitar, vocals), then 14 and 16 years old, respectively, started playing guitar. Within 3 months, Alejandro and Fabian took to the stage with their older brother Daniel (bass, percussion, vocals), then 20 years old, to perform before an audience of over 350 at a Pine View High School show. This would be the first of many public performances for the band at the school where its members had all been students together throughout their childhoods.
In the years that followed, the band was separated geographically, while Fabian pursued an Architecture degree at the University of Florida and Daniel left Florida to attend Harvard Law School in Cambridge, Massachusetts. Nonetheless, during this period, Boyce Avenue assembled at every available opportunity to collaborate musically. It was not until October of 2004 and the subsequent months, however, that Boyce Avenue would really come into its own. Daniel, who had recently graduated from law school, reconnected with the band in Florida as its full-time bassist, and Alejandro, at the age of 18, launched into writing the band's first original song, "Find Me." In the following months, the band performed locally in its hometown of Sarasota, and in April of 2005, the band hit the stage at Pine View High School for the last time. The band's performance at the Mr. Pine View competition, an event which Alejandro would go on to win, was covered in the local press.
Upon Alejandro's graduation from high school, he joined Fabian at the University of Florida, in Gainesville, where the band refined its signature sound playing out in traditional venues like Market Street and Side Bar. In October of 2006 and the months that followed, the band recorded its first three singles at Nickel and Dime Studios near Atlanta, Georgia. The project was engineered by Kris Sampson (Train, the Black Crowes) and produced by Don McCollister (Sister Hazel, Third Day). In 2007 and 2008, Boyce Avenue was honored in several songwriting competitions judged by a host of accomplished and renowned music industry artists, professionals, and executives. The band qualified as a Southeast Semifinalist in the 2007 IMWS competition; "All The While" was selected as a Semi-Finalist in the 2007 International Songwriting Competition, and as one of twelve Lennon Award Winners in the 2007 John Lennon Songwriting Contest; "Find Me" was selected as a Finalist in the Pop category for the U.S.A. Songwriting Competition; and "Hear Me Now (piano acoustic)" was selected as a finalist in the Best Group/Duo category for the IAMA songwriting competition, and as a finalist in the 2008 International Songwriting Competition.
Focused on the completion of a debut album, Boyce Avenue took a hiatus from its public performance schedule to write, produce, and record additional singles. In July of 2007, the band returned to Atlanta, Georgia, this time to record three songs at the Electron Gardens Studio in the historic Biltmore Hotel. These songs were engineered by Gary Pfaff and Tim Delaney, and were produced by Boyce Avenue. In October of the same year, the band finished tracking for the debut album with the recording of two songs at RMP Studios in Orlando, Florida. The final three songs for the album, "Dare To Believe," "On My Way," and "Hear Me Now (piano acoustic)" were engineered at RMP Studios by Veit Renn (Jennifer Hudson) and Adam Barber (Creed, Shinedown, Alterbridge), and were produced by Boyce Avenue.
The debut album, titled “All You’re Meant To Be,” was released by Boyce Avenue on March 25, 2008. All of the songs were mixed by Austin Deptula (Eisley, New Found Glory), and the entire project was mastered by Rodney Mills (Pearl Jam, REM, Sheryl Crow). The physical album is available worldwide exclusively through Storenvy, while the download versions can be found on iTunes/Amazon.com/Rhapsody/Napster/eMusic. Since the album's release, it has been written about in CNN Money, the Kings of A&R, and in other press, its songs have been featured on various MTV shows, and the band has established itself as one of the top 8 Artists of All-Time on YouTube, with over 90 million hits. Most recently, "All You're Meant To Be" has been licensed for sale nationwide in the Philippines through MCA Music, and is on path to Gold status. On the strength of the band's touring success in the United States and the Philippines, the band launched a worldwide tour in 2009.