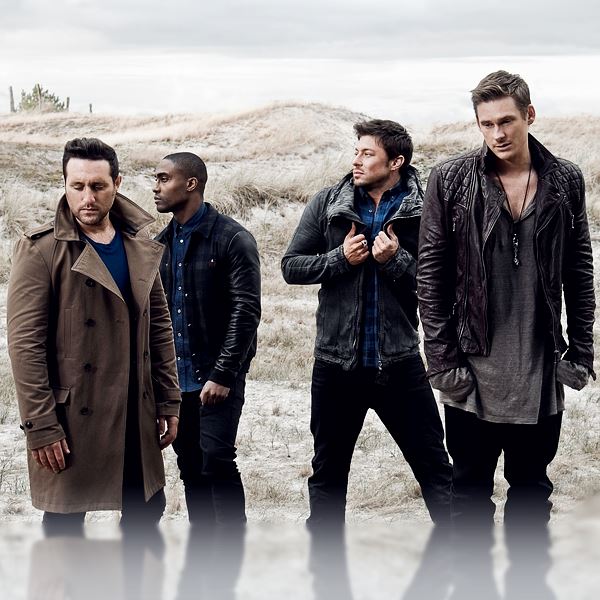 There are multiple artists with this name, including a British pop/rock group formed in Glasgow, Scotland, in 1973, and a British boy-band that debuted in 2001, and, after much success, split up in 2005:
1) Blue are a British boy band consisting of four members: Lee Ryan, Duncan James, Antony Costa, and Simon Webbe. The band debuted in 2001, and split up after much success, in 2005. All of the band members pursued solo singing careers alongside other interests. The band recently announced in April 2009 that they had reformed. Their only confirmed gig so far is Capital FM's Summer Ball in London.
The band released their debut single "All Rise" which sold more than 1.300.000 copies on May 21, 2001 and the song rose to number four on the British Top 40. Blue released their next single, "Too Close" (a cover version of Next's song), on August 27, 2001 and this song was Blue's first number one single. After the cd single Too Close there were two new singles from the album All Rise; If you Come Back and Fly By II (which is a remix of Fly By). Those singles sold more than 200.000 copies in the UK. The band released a new single and album, in the summer of 2002, both called "One Love" which was the best Blue album, selling more than 3.000.000 copies. Their next single, which also reached number one on the British Top 40, was a duet with Elton John entitled "Sorry Seems to be the Hardest Word", a cover version of one of John's songs. This track was number one in Europe for 6 weeks
The band decided to split after Elton John suggested that their popularity was decreasing and that they should concentrate on their solo careers. They did so after releasing their Best Of Blue greatest hits compilation in 2004, which contained a few new tracks such as "Curtain Falls", "Get Down On It" and "Only Words I Know".
On 29th January 2011 they were unanimously chosen to represent the UK at the 2011 Eurovision Song Contest in Düsseldorf, and have consequently reassembled into a boy band once more.
2) Blue was a British pop/rock group formed in Glasgow, Scotland, in 1973 by Timmy Donald (b. 1946, Bristol, Avon, England) (drums), Ian MacMillan (b. 1947, Paisley, Strathclyde, Scotland) (bass, guitar, vocal), and Hugh Nicholson (b. 1949, Rutherglen, Strathclyde, Scotland) (guitar, vocal, keyboard). Signed to Elton John's Rocket Records label (John also produced them), they released their self-titled debut album, then added Robert "Smiggy" Smith (b. 1946, Kiel, Germany) (guitar) for their second, Life in the Navy. They were then reorganized, with MacMillan and Nicholson remaining and adding Charlie Smith (drums) and David Nicholson (guitar). This lineup scored a U.S. singles chart entry and U.K. Top 40 hit with "Gonna Capture Your Heart" and recorded the third album Another Night Time Flight (1977) and the fourth album Fool's Party (1979), after which Blue broke up.
3) Blue was a Swedish indie band from the early 90s. They released two albums on the Skellefteå label A West Side Fabrication, "Blue" (1993) and "Sitting on a Sofa" (1994).
4) Blue was a project of Chris Mann and Paul Darking from the UK. They play a mix of Dub, Downtempo, Ambient, Trip Hop and other electronic styles.
They released three official albums (Resistance, Mexican Church and Nightwork), one mini album (Corrosion), some EP's and do appear on some compilations. Last activity was in the year 1999.
5) Blue is a Rock band which released the album 'Voice of Reason' (2003).
6) Blue is a World music band which released 'Indigo Soulstice' (2002) and 2004 'Stay Gold' (2004).
7) Blueis a Japanese rock band with a rich discography: four LPs (Since, Breath and Misty all released in 1999 and 2000's Birth album) and a best-of compilation, "Best 1997-2001" released in 2001. (see Blüe)
8) Blue is an Electronica artist which in 1999 released two albums,"Loosing Control" and "Intentisy", both on the label Fast Moving.
9) Blue is an Indie recording artist, who's lengthy discography includes the albums: "Holly's Song" (2000), "The Lion And The Pride" (1994 - live recording), "Alive in the Valley, Dead in the Water" (1993) "Something Borrowed Something" (2002), "Welcome to the Nineties" (1990), "The Lion's Den" (1991), "Burden" (1995), and "Rockabilly Rat" (1999). He also composes film scores such as those for the feature-length TV movies "Legends" (2003)and "South Mountain Magic" (2006) and the indie film "Cowboy Killer" (2008). He has also worked under the monikers "Metal Machine" (with DiRTY DEAL founder/front-man Terry Miller) and "Church Of Chaos". He produced and performed on a number of records with Rockabilly and Punk artist Erik Mielzarek. His current musical vehicle is the band "Booze Monkey" who released the albums: "Good Luck Mr. Gorsky" (2003), "Savannah Colors" (2004 - live recording), "Sippin' Pretty" (2004 - live recording), and "4th St." (2008).
10) Blue was an Italo Disco group which released "Everybody Needs Somebody" in 1986.
11) Blue was a dnb artist who first released on the label Runninz in 1997. The label famously owned by Marvellous Cain. Then he went to Vinyl Distribution, a German label. A move which it is rumoured to have prompted Marvellous Cain to threaten to throw Blue out of the window. He also recorded on the labels Southern Sessions, Streetbeats and Noir amongst others and recorded with a number of artists including Donovan Smith. He also had a number of releases under the name Ultra Violet and ZnO. As a sound designer he has worked under the name ZnO with Robert Morgan on the short films THE CAT WITH HANDS (which won a Welsh BAFTA), THE SEPARATION and MONSTERS.
12) Blue was an indie pop band from campinas, Brazil. they become "Summer, I Swear", and now all is gone.
13) Classy euro Aor release fronted by Krokus frontman Mark Storace. Drive She Said... Le Suisse.Vic Vergeat was ex Toad and has released a number of solo albums as well as guesting on Gothards, "D-frosted".
Band Members :
Marc Storrace - vocals
Vic Vergeat - guitars, keyboards
Rick Schultz - drums