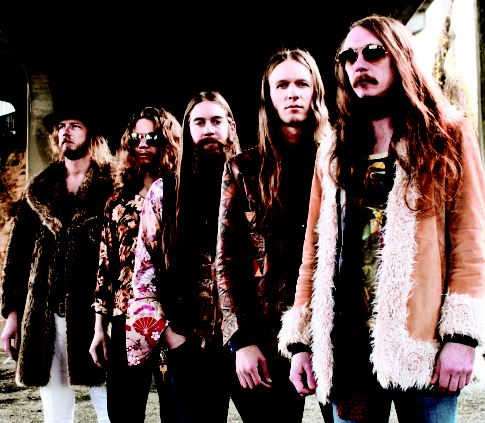 BLACK PUSSY
If Hendrix had lived, he probably would have ended up recording Black Pussy’s On Blonde in 1971 as a kerosine-soaked hard rock warning against the commercial, pretentious pop overkill to come. Black Pussy is the sound of a dirty, immense engine coming down a two-lane blacktop; a trip fueled by the roar of a 1967-purchased bong in the back of a 1972 Nova (“Marijuana”), listening to the cars surrounding, heading into the sunset (“Indiana”).
On Blonde was written and recorded by Dustin Hill, it’s his baby. He’s usually in White Orange with Adam Pike (who guests here), and rocks Black Pussy with bassist Pike, guitarist Ryan McIntire, backing vocalist Madeline Mahrie, and guitarist Peter Meissner (the latter also did the mind-blowing pop art album artwork). Wild and furious White Orange drummer Dean Carroll is drumming for Black Pussy when they play out live as well.
Black Pussy’s distinctive tag? “The Rolling Stones song 'Brown Sugar,’” he says. “We heard a rumor that they wanted to call it ‘Black Pussy’ but for some reason or another they had to bring it down.”
The album is another sleek, inimical machine from Adam Pike’s Toadhouse Studios in Portland, OR; responsible for White Orange’s recent press-busting self-titled full-length and various EPs and singles. “He’s an engineering wizard and with a super solid personality,” Hill says.
For a long, lovely, midnight desert ride, it makes a stunning companion, jaw-grindingly full of dangerous ideas snug in cigarette-burned red leather car seats. “I got death on my shoulder / and the girl with the sweetest ass,” Hill melodically boasts in the chugger “Blow Some Steam Off.” “She’s my high heeled cocaine ... I got my switchblade suitcase.” You want to fly down the road alongside him, just lit up by the blunt you're sharing.
On the bold as love, big beat “Ain’t Talkin’ About Love,” the serpentine, sensual come on feels as threatening as it is intoxicating (Madeline sounds like Stevie Nicks if she was anxiously swooning for a grimy biker boyfriend, not Lindsay Buckingham). Using some form of time travel, “Indiana” chops up dusky minimalism to its long, sinister tale of a restless beer run in a crumbling town. “Is it any wonder that I’m lonely / Twisting and turning above my head.” It's like a Springsteen epic deconstructed and set on fire outside a Mexican garage.
“Dream weavers, fortunetellers and creators alike,” Hill casually mentions as his influences, “Heart, Brant Bjork, Prince, The Cars (circa 1978), Guns ‘n’ Roses, Fleetwood Mac (ca. ’78).” (Bands that were big back when it was more about the stirring of loins than upholding vanilla indie Puritanism; the Crue’s Shout At The Devil changed Hill’s life and his first LP was Judas Priest’s Diamonds And Rust.)
“We just want to make as much rock n roll as possible,” Hill says of the full band that will be performing his dream ride live. He longs to perform the songs that come to him from “the umbilical chord of the universe attaching itself to me (with lots of weed). As long as we are playing music we’re getting our fill. It could be live playing to one person or a sold out show, in the studio, rehearsal room, or alone in an empty room. It’s all one in the same in the big picture.”
Like the blues players who extolled short, thrill-filled lives, Black Pussy’s On Blonde is a hedonistic binge road trip, eating up and inspired by everything but the bullshit of power politics and organized religion: “Cigarettes, coffee, booze, woman, it’s all rock n roll,” Hill says. “I want listeners to feel sex on opium when they listen to us.”
Hill’s favorite quote is “Careful people and careful poetry last long enough to die safely.” (Charles Bukowski from Septuagenarian Stew: Stories & Poems, 1990)