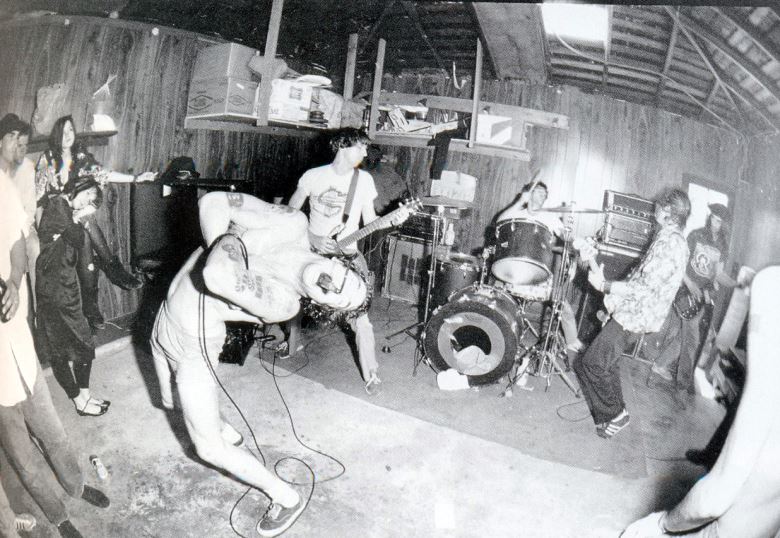 Black Flag is an American hardcore punk band formed in 1976 in Hermosa Beach, California, United States, largely the brainchild of Greg Ginn, the guitarist, primary songwriter and sole continuous member through multiple personnel changes.
Keith Morris was their original lead singer. He left the band suddenly in 1979 to form the well-known band, Circle Jerks. Ron Reyes was the second singer for the band, but decided to leave the band not too long after. Dez Cadena would be their next singer, but switched to second guitar when they found fourth and final singer Henry Rollins in Washington D.C. in 1981.
While Black Flag were - and remain - very respected among their underground culture, their music has not been the stylistic model one might expect, in spite of their formidable reputation. Rather, their influence was seen primarily in their tireless promotion of a self-controlled DIY aesthetic. They're often regarded as pioneers in the movement of underground do-it-yourself record labels that flourished among the 1980s' punk rock bands.
Over the course of the 1980s, Black Flag's sound, as well as their notoriety, evolved in ways that alienated much of their early punk audience. They were part of the first wave of American West Coast punk rock, are considered a key influence on Punk culture band, and are especially important in the creation of hardcore punk. Their later sound, however, was often reminiscent of proto-heavy metal bands such as Black Sabbath.
The band broke up in August 1986, when Greg Ginn decided to quit.
Through seemingly-constant touring throughout the USA and Canada, and occasionally Europe, Black Flag established an extremely dedicated fan base. Many other musicians would follow Black Flag's lead and book their own tours, utilizing a word-of-mouth, grass-roots network.
On January 25, 2013, it was announced that guitarist Greg Ginn and vocalist Ron Reyes would reform Black Flag, joined by Gregory Moore on drums, and 'Dale Nixon' on bass (Dale Nixon is a pseudonym sometimes used by Ginn, most prominently as the bassist on My War). The band will tour as well as release a new album, their first since 1985's In My Head. In March of that year, it was announced that Screeching Weasel bassist Dave Klein joined the band. On May 2, 2013, the band released a new song entitled "Down in the Dirt" through their website.
Around the same time, it was announced that the lineup that played at GV 30, Morris, Dukowski, Stevenson and Egerton, would tour performing Black Flag songs, under the name FLAG. It was later announced that the lineup would be joined by Dez Cadena.