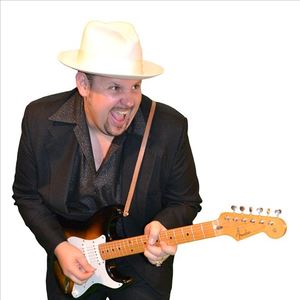 Big Boy Bloater is a well known figure on the blues and roots music scenes around the world – his unique and powerful style has thrilled audiences from London to Las Vegas and his peformances have built an enviable profile and following, not only from the roots crowds but from anyone that has ever witnessed his amazing charisma and talent on stage.
As well as touring all over Europe, the middle-east, the USA and Canada, Big Boy Bloater has made numerous TV and radio appearances. Most notably he recently appeared as a live guest on the Craig Charles Funk & Soul Show on BBC6 Music, and on Radio 2 he recorded a session and interview with Jools Holland and his band which broadcast on 9th May 2011. He’s previously recorded three sessions for Mark Lamarr’s late night Radio 2 show ‘God’s Jukebox’ (Nov 06, Dec 08 & Jan 10 – indeed when Mark heard Bloater was finishing his old band he made sure he fitted in one last session!) and two sessions for the Paul Jones R&B show. He spent a week as the house band on CH4’s Big Breakfast and has racked up many other TV and radio appearances both home and abroad. He has played in some of the most famous venues in the world and has appeared at many major festivals worldwide.
Bloater has played guitar with modern artists like Paloma Faith and Imelda May and continues to be a much sought after session player as well as being the guitarist of choice for many visiting 50′s Blues, R&B and R&R legends (see Reviews and Collaborations below).
Bloater has it all, writing, performing, singing and playing and he comes with an amazing pedigree – he has a career that most guitarists would die for, but he wants to continue to push the barriers and is constantly striving to produce bigger and better shows. He is a consummate professional and also a very nice guy! Oh yes, all this and he’s still not even 40 years old!
The Limits
So with a big story and profile behind him, 2011 sees the launch of Big Boy Bloater’s exciting new project – The Limits.
With a new album release in March 2011, featuring many impressive guest artists (Imelda May, Snowboy, Dean Beresford (Richard Hawley Band), Al Gare (Imelda May Band)), Big Boy Bloater is building on his rhythm and blues roots, inventing a new, fresh sound – delivered in his unique, mesmerising and powerful style. He brings you brand new sounds from his own songbook, a stunning mix of swamp soul, dark blues and twang.
Reviews and Collaborations (and just a little bit more history)
Big Boy Bloater has also played guitar for R&B/rockabilly legends: Lloyd Price, Dennis Binder, Wanda Jackson, Ray Sharpe, Earl ‘Speedo’ Carrol, Harvey Fuqua, Eugene Pitt, Jimmy McCracklin, Rosco Gordon, Joe Houston, Big Jay McNeely, Hayden Thompson, Eddie Bo, Nappy Brown, Tommy Brown, Lazy Lester, Young Jessie, Big Al Downing, Billy Lee Riley, Frankie Ford, The Cleftones, The Teenagers, Jimmy Cavello, Hardrock Gunter, Roddy Jackson, Frankie Miller, Chuck Rio, Marvin & Johnny, The Eldorados, The Bobbettes, The Del Vikings, H-Bomb Ferguson, Hal Singer, The Medallions, Roy Gaines, Shirley Gunter, The Five Keys, Warren Storm, Barrence Whitfield, Eddy Clearwater, Bobby Brooks Hamilton (Jackie Wilson’s son), Sonny Burgess
That Little Bit More History
Big Boy Bloater has been immortalised under the chapters ‘R&B Guitar Icons’ in the following books –
‘Billboard Illustrated Encyclopaedia of Music’
‘Rock & Pop – the Complete Story’
‘Blues – the Complete Story’
for his part in keeping Jump Blues to the fore in modern times.
A vinyl 7” single, (‘Whammy!’ b/w ‘Double Whammy!’) was personally produced by Mark Lamarr in 2008, and has already become a collector’s item. 100 copies were given away in a major BBC Radio 2 competition in November 2008 to celebrate the 10th Anniversary of Mark Lamarr’s award-winning ‘Shake Rattle & Roll’ show.
And a Little Bit of Fun
Big Boy Bloater was once asked by Sir Paul McCartney to record with him at Abbey Road.
Bloater once sat on a judging panel alongside Paul Gambaccini, Shakin’ Stevens, Zoot Money and the guy playing Buddy Holly in the west end show.
Quotes
”One of the great Blues men of our time”
Jools Holland, BBC Radio 2
“I love this band! Bloater is a phenomenal guitarist!”
Mark Lamarr, BBC Radio 2
“I love this guy. He has a voice that sounds like it’s been soaked in turpentine for the last decade!”
Craig Charles, BBC 6 Music
“The finest exponent of early r’n’b this country has ever produced.”
Now Dig This Magazine
“Big Boy Bloater is a big man with a big talent – he is a great front man and knows how to work an audience.”
Bill Smith, Blues In Britain