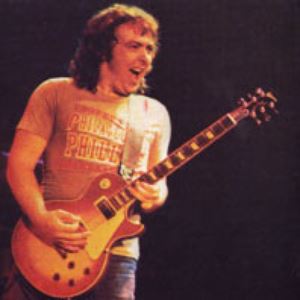 Bernie Marsden plays Blues-Hard Rock or Hard Rock-Blues. He's mostly known for his time as guitarrist in Whitesnake (1978 - 1982). Before Whitesnake he played with British Babe Ruth (check 'em out), PAL (Paice Ashton Lord)and a short period in UFO. He also played as a session musician during this period.
During his last two years with Whitesnake he recorded 2 solo albums:
"And about time too" - 1980
"Look at me now" - 1981
On both records appeareances were made by Whitesnake colleagues.
After his departure from Whitesnake he formed Alaska and later MGM together with Mel Galley who took his place in Whitesnake and the same bands bass player Neil Murray.
Finally he once again teamed up with Micky Moody who he played along with in Whitesnake. They have through the years been toghter in different bands, for example:
Moody Marsden Band
The Snakes
Company Of Snakes
and today
M3 (together with Neil Murray)
All these bands have released records.
Welcome
So, at last I hear you all sighing. Having celebrated my birthday I will now produce my yearly report!!!
To cap an entertaining day I was delighted to have David Coverdale on the phone from the USA singing "Happy Birthday" to me, now that is a very rare thing I can assure you! Thank you DC. Speaking of whom, just wait until August, the "SHINE" album will be released and you can all hear his vocal on the new version of "Trouble" It is fabulous.
Also on board are Joe Bonamassa, Ian Paice, Don Airey and a host of my good and talented friends who play on the album, Jimmy Copley, John Gordon, Ian Jennings, Simon Webb, Cherry Lee Mewis and more.
Having spent many days at the wonderful Abbey Road last year I finished the album at the end of last year, Rob Cass has done a wonderful production, some great guitar tones for the guitar police, the lovely bonus of my friend Joe Bonamassa on the title track. I hope to post some video of us recording in the studio when the album is out.
Another Abbey Road event was my involvement with the legendary Jack Bruce. I was ending a session, Jack came in and asked "Where do you think you are going?" Jack and I first worked together on Cozy Powell's first solo album, Jack then did me the honour of playing on my first solo "And About Time Too" This time I am on two tracks of Jack's "Silver Rails" album which is already out, I strongly recommend it, Robin Trower. Uli John Roth, Phil Manzanera, Cindy Blackman Santana, John Medeski all make fine contributions to this album, and then there is Jack Bruce, check it out!
At the end of March I was in New York, I played with The Allman Brothers Band at The Beacon Theatre, I played "One Way Out" and to stand next to Warren Haynes and Derek Trucks with Jaimo and Butch Trucks behind me was a magical moment in my career, it was very special, I would like to thank all the guys in the band for their hospitality over the weekend.
I arrived back in England for the "Remembering Jon Lord" concert at the Royal Albert Hall, another very special night, emotional and great fun. Playing with Ian Paice again was great, he is really amazing, and playing those old PAL songs was a revelation, I must thank the guys from The Temperance Movement who were very good, Deep Purple closed a show that had included Glenn Hughes, Paul Weller, Miller Anderson, Rick Wakeman, Paul "Wix" Wickens, Jeremy Irons, Bob Harris, and the great Joe Brown, whom I had the honour of sharing an Albert Hall dressing room !
Some fabulous young musicians made up the Orion Orchestra who were led brilliantly by conductor Paul Mann, playing some beautiful Jon Lord compositions, a terrific duet featured Sandi Thom and Steve Balsamo, a first class evening.
I played a benefit show at the Shepherds Bush O2 for my long-time friend Walter Trout who has some serious health problems at this time, he is in the US awaiting an operation, we all wish him well. It was great to see Roger Chapman, Otis Grand, Ian Parker, Danny Bryant and a host of musicians associated with Walter in the UK.
So getting time to close, I have rescheduled my UK gigs for the end of October, before that I will be in Ballyshannon for the Rory Gallagher festival once again, then to Loreley in Germany with the two Joe's, Bonamassa and Satriani, The Steelhouse Festival in Ebbw Vale in July, and in November I have an interesting couple of weeks playing with Joanne Shaw Taylor, I will be playing my set with Jim Kirkpatrick, then I will join Joanne and her band for the end of her shows, all in the UK and I am looking forward to it.
So "Shine" will be out mid August, be aware I have seen advertisements on the internet for sales of "SHINE", as of this time the album is only available to pre order, contact Mascot-Provogue to do so. Lots of press and radio is planned, so I hope to see you all out there.
All the best, and thanks for all the birthday messages,
Bernie M
May 2014
Official Website: Bernie Marsden