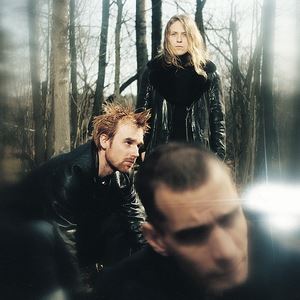 There are, at least, seven artists known as Baxter: 1) A Swedish band, combining drum and bass loops & the hypnotic, sometimes melancholy, voice of Nina Ramsby. 2) A Long Island, NY prog rock group, who did one eponymous album in 1973. 3) A Chicago post-hardcore band (sometimes typset .baxter. in artwork - disbanded). 4) A Mannheim, Germany punk band. 5) A Poitiers, France melodic hardcore punk band. 6) A Toms River, NJ singer who later formed The Trans Megetti. 7) An alias of Willy Baxter, a Finnish electronic artist.
1) From Sweden - in 1996, Ricky Tillblad, one of the Swedish recording industry's pre-eminent designers, dub/reggae aficionado, and the man behind the Stockholm dub club "DubDeck", met Nina Ramsby, former guitarist and lead singer in the band salt.
At the time, Nina was looking for design and graphic arts work to finance her musical interests. She began working at Ricky's design firm F+, and in their off-hours, the two began writing music together.
That same year, Ricky bumped into Carl Herlöffson - guitar player/engineer/producer extraordinaire and head of the Indie Label Primal Music - at his club.
The chance meeting resulted in Ricky signing on as partner in Carl and his brother's label.
By late '96, Ricky and Carl had become a prolific production team working as "Eclectic Bob", cutting instrumental club-oriented drum & bass tracks for Primal Music. One fateful day, Nina came into work at the studio and was introduced to Carl, bringing about the convergence of all three of the forces, destined to become Baxter.
For the next three months, Ricky, Carl and Nina spent all of their spare time in the studio experimenting with sound, writing and recording, and before they knew it, they had completed the better part of an album. By the spring of '97, all that was left to do was a bit of polishing and mixing on the tracks.
In the fall of '97, the three of them -- with a new name, Baxter -- sent out a 5-track promotional CD (comprising selections from their full length album). Almost immediately, major US labels were calling, raving about the band.
After lengthy negotiations and numerous overseas flights, Baxter decided that Maverick Recording Co. was where the 'vibe' was.
2) Baxter were a Long Island New York group that included Doug Arioli (guitar-keyboards-vocals), Steve Belgrade (guitar-vocals), Lawrence Di Natale (drums-percussion), Steven Kirshenbaum (keyboards-synthesizer), and Edwin Damus Perry (bass-vocals).
3)Baxter (sometimes typset .baxter. on their album covers) was a Chicago Post Hardcore band. They were probably best known for including members who would later form Rise Against, The Lawrence Arms, Holy Roman Empire and The Honor System.
Baxter formed in 1995 in Chicago, Illinois and began playing basement shows and building up a fanbase. Their first record was released independently as a full length cassette entitled Troy's Bucket, and enjoyed moderate success in the underground scene. They began touring extensively around the Midwest. In 1996, they signed to the independent label Static Station. 1997 saw the release of a 7" entitled Lost Voices, and by this time they were very popular in the local scene. In 1999 they split up and members have remained active in the hardcore scene in bands such as The Killing Tree, The Honor System, The Lawrence Arms and most notably Rise Against. In 2003, Will Not Clear Man records put out Baxter, a compilation of both of their official releases as well as several unreleased songs and demos. In 2004, Minneapolis rapper P.O.S. sampled the track "Out of Reach" for his track "Kidney Thief" off the album Ipecac Neat.
4) A punk band from Mannheim, Germany.
6) A Toms River, NJ singer who later formed 'The Trans Megetti' (Art Monk Construction/Southern).
7) Already with a several years history in Finland´s music scene playing keyboards in various bands, around 2004 multi-instrumentalist Willy Baxter started to create his own musical vision. The main goal was to compose strong songs with beautiful popmelodies, vocals and spacey synth-based production without forgetting the dancey side of the background.
In 2007 Willy Baxter´s debut release “Aiming High” single was released digitally in all main netstores. 2009 was a busy year for Willy Baxter. He released his first proper EP “Proof” (http://www.last.fm/music/Baxter/Proof+EP) under shorted name Baxter consisting 4 original tracks with high profile remixes from artistis like Lifelike and Spirit Catcher. The same year Baxter was signed for british Mullet Records and full-length album "In Between" (http://www.last.fm/music/Baxter/In+Between) was released in the end of 2009 consisting songs from 5 year period. Baxter was also busy doing remixes for other artists including Tesla Boy.
In 2010 Baxter is working hard on new original material plus remixes.