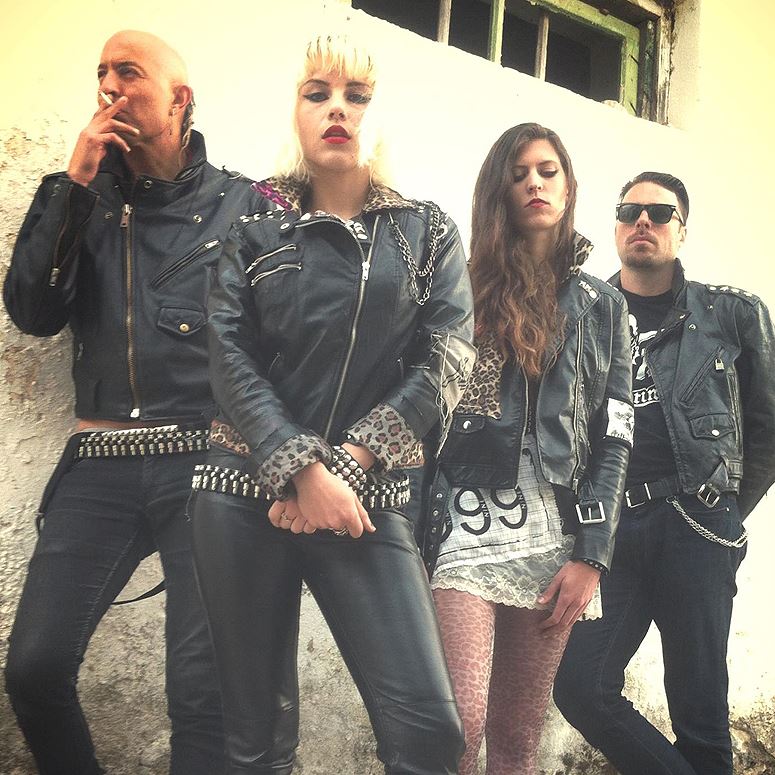 Barb Wire Dolls is a Los Angeles, CA, USA, punk band, founded 2010 in Crete, Greece.
"I like the comfort in knowing that women are the only future in rock 'n' roll." - Kurt Cobain
Barb Wire Dolls are the most vital band in popular music today, representing all that is relevant and furious about modern punk rock. Hailing from an artist commune on the island of Crete, the band left crisis-ridden Greece in 2010, relocating to Los Angeles, California, at the invite of legendary KROQ DJ Rodney Bingenheimer. Upon their arrival in the United States, Barb Wire Dolls immediately sold out the legendary Roxy Theatre in Hollywood, before going on to melt ears & hearts on 700 stages across 22 countries. The cultural and musical immediacy of this band is not to be missed, boasting a live show that is second to none.
Fronted by a whip-smart vocal and fashion icon named Isis Queen, Barb Wire Dolls intelligently weave multiple sub-genres of punk, rock, and even reggae, producing a sound that is truly unique, towering above today's culture of imitation and over-saturation. The group's crushing musicianship radiates a fresh confidence and danger, blasted forth by former pro surfer & skateboarder Pyn Doll on guitar, Krash Doll on drums, and JJ on bass. The Washington Times glowingly stated, “If you were bummed that you missed out on the Sex Pistols and Black Flag because you were only one, or not even born yet, here’s your chance to catch one of the best bands playing that style today. From their music to their attitude, Barb Wire Dolls embody that same spirit of the late ‘70s punk scene.”
In late 2012, the band encamped to Nirvana noise-guru Steve Albini’s recording studio, producing their debut LP Slit over the span of just two days. Garnering critical comparisons to the likes of Nirvana, Blondie, and the Ramones, Slit and its chart-topping lead single 'Revolution' powered the band to almighty festival headliner status (shredding fest-stages across 12 countries), while simultaneously gracing the covers of 13 separate magazines. Over the past year, Barb Wire Dolls have been recording their highly anticipated sophomore album, Desperate, working alongside seasoned producer and Evanescence mastermind Jay Baumgardner, at Hollywood's world-famous NRG Studios.
Barb Wire Dolls have co-headlined with the likes of GBH, Fear, Mike Watt, Sham 69, Discharge, Cockney Rejects, Murder Junkies, CJ Ramone, 999, Status Quo, Mushroomhead, and Candlebox, also playing direct tour support for Jello Biafra, NOFX, Descendents, Bouncing Souls, and Steel Panther. The band has released multiple 7" vinyl singles (including one with OFF!), and had five books published about them.
Trail blazers in art, fashion, punk, and women-fronted groups, Barb Wire Dolls are doing something truly important and original - while selling out stages across the world and waking people up to a brand new sonic wave in modern electric music.
Barb Wire Dolls are: Isis Queen (vocals), Pyn Doll (guitar), Krash Doll (drums), JayJay Doll (bass)
Sites: Discogs, YouTube, ReverbNation, Twitter and Facebook.