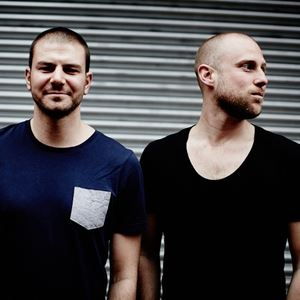 Audiojack are the Leeds (UK) based DJs, producers and label owners making big waves in recent years with original productions and remixes for labels such as 20:20 Vision, Leftroom, Get Physical, Diynamic and their own rapidly expanding Gruuv imprint.
Whilst it was their robotic techno sound that filled the dance floors in their early years launching them onto the international stage it is their current deeper and housier style which has thrust them back into the spotlight, reaffirming their ability to produce groovy underground music across the genres whilst maintaining their own strong signature sound.
As DJs Audiojack have toured in over 50 countries taking in some of the world’s best venues and events: Space (Ibiza), Fabric (London), Watergate (Berlin), D-Edge (Sao Paulo), Ageha (Tokyo), Circo Loco (Sydney), Avalon (Los Angeles), Sankey’s (Manchester), Fabrik (Madrid), Zouk (Singapore) Basics (Leeds) to name just a few. Festival appearances have included the massive Fuji Rock Festival in Japan and the Chemical Music Festival in Rio de Janeiro.
But things like this just don’t happen overnight. Or do they? To get the full picture we should go back to the beginning…
2002…
The story of Audiojack begins ten years ago in Ibiza; a chance meeting brought about through a mutual love of music and DJing saw the duo of James Rial and Richard Burkinshaw become friends, although it wasn’t until three years later when settled in their adopted hometown of Leeds that they decided to take to the studio together, in an attempt to turn their long term passion for DJing and love of vinyl into something more perpetual.
2005…
After an intensive year of studio time, cheap cider and angry neighbours the duo produced their first demo – a six track mash up - which was sent to around 20 labels yielding no reward, although a random meeting at a local record shop was about to change all that, as their first production from that disc ‘Robot’ was picked up by then upstart label Leftroom.
2006 to 2008…
Released in the summer of 2006, Robot went on to become one of the most talked about and supported tracks of the year, notching up five figure sales and gaining huge support across the board from Sasha to Richie Hawtin, from Pete Tong to Annie Nightingale.
There was little time for reflection though as the duo found themselves in serious demand, going from having no gigs to a practically full tour diary overnight with offers from many of the labels who’d been reluctant to check out their demos just a few months earlier – an experience which would later prove important in their decision to launch their own label.
Soon, Ralph Lawson and his 20:20 Vision label came calling, making the decision of what to do next an easy one - the infamous Leeds label’s office was just a short walk from their home studio, and with that they signed a three single and one album deal, the remnants of which are still in place today as artist and label continue their long-lasting partnership.

Legendary Leeds club Back to Basics played a hugely influential part in shaping Audiojack in these early years and when then resident Paul Woolford offered them the chance to remix his recent classic ‘Erotic Discourse’ they got to work, jacking up the original with a more dance floor orientated alternative, which quickly found its way to the top of Beatport’s techno chart.
The singles and remixes which followed were a manifestation of their early influences of house, techno, hip hop, soul and more, resulting in remixes for labels such as Renaissance, Blu-Fin and Great Stuff, the latter of which - a remix for Mike Monday - began to show Audiojack to be somewhat techno hit makers, with this remix becoming their third production to top Beatport’s techno charts. Further remixes for the legendary Underworld and Lawson’s band 2020 Soundsystem showed their versatility. Their varying styles made it hard for the media and music fans to categorise them; one magazine even reviewed the same track in 4 different genres!
However having released just 4 remixes in 2008 their hectic tour schedule began to take its toll on their production output, as they found it difficult to maintain a healthy balance between studio time and playing over 80 tour dates per year whilst stockpiling new material for their next big project, their debut album.
2009…
Over a year in the making Radio was released on 20:20 Vision to critical acclaim. Clash magazine wrote "anyone with appreciation for house or techno in any of their varied forms will dig this – Impressive”. IDJ Magazine commented "Audiojack represent all that’s great about 20:20 Vision, house music and the UK dance floors right now."
Tracks such as Schizophonic, Jack the Keys and title track Radio picked up big support with the likes of Pete Tong playing repeatedly on Radio 1, James Zabiela, DJ Hell and Danny Tenaglia giving big room spins, with the likes of Lee Burridge and Laurent Garnier showing love on the underground circuit.
Despite its fiscal and club success Audiojack felt a little perturbed. Radio was (possibly somewhat naively) meant to be listened to as one continuous piece of music. A sign of the changing times, most people only heard sections, divided up into single tracks for the digital download market, as people handpicked the parts that best fit their own DJ sets and discarded the rest, leading Audiojack to question the relevance of this kind of album in today’s electronic music scene.
December saw the duo make their debut on Get Physical’s digital sister label with their ‘Kicks for Kicks’ EP, which found favour amongst the likes of Sven Vath, Solomon and DJ T.
2010…
It had always been an ambition to launch their own imprint, and in 2010 this was realised with Gruuv, established to act as a social hub for Audiojack to nurture and develop upcoming talents, promote established artists, provide an occasional release portal for some of their own material, share ideas and showcase high quality electronic music.
Gruuv releases quickly proved to be in high demand, notching up over 45,000 single sales over just their first 12 releases, hitting the number one Beatport spot and Resident Advisors monthly top 50 several times in the process.
As their own sound developed, becoming deeper and housier the duo began to distance themselves from the tired and generic tech house and techno sound. Their Shakedown / Motion Sickness EP on 20:20 Vision picked up big support and was a mainstay in download charts throughout the summer, becoming 20:20’s best selling EP of the year.
Their remix for H.O.S.H on Diynamic gathered pace on the underground with plays from the likes of Thomas Schumacher and Dubfire, whilst their remix for Groove Armada was the surprise choice cut from that EP, picking up Radio 1 support from Pete Tong amongst others.
2011…
Whilst remixes for Channel X, Nice7, Uner, Hugo, Tiger Stripes and more picked up impressive support from DJs as varied as Eric Prydz and Seth Troxler, it was their hook-up with vocalist Kevin Knapp on his track ‘Like This’ on Leftroom which set dance floors alight and gave a keen insight into the newer Audiojack sound, picking up massive support from the likes of Maceo Plex and Marco Carola.
However, it was their ‘Get Serious’ EP on 2020 Vision which stole the show. A non mover in Beatport’s deep house top 10 for several months, the lead track Get Serious became the 8th most charted track on Resident Advisor in December with support across the board from Steve Bug to Groove Armada. ‘Polka Dot Dress’ was no average B side, this too remained a chart mainstay for several months, whilst the C side; a cover of Backroom’s ‘Definition of a Track’ found favour with many older heads such as D’Julz, Laurent Garnier and Timo Maas.
2012…
10 years on since that chance meeting in Ibiza and Audiojack are more inspired, confident and excited about the future of music than they’ve ever been, with many exciting projects lined up for 2012. The first release of the year due out on Gruuv in February features two Audiojack originals with massive remixes from FCL, Gorge and Waifs & Strays. Collaborations with Noir, Ruede Hagelstein and Stee Downes are expected to follow soon after, along with a brand new EP on 20:20 Vision and another, soon to be revealed label.
Audiojack are also working on their LIVE show, expected to launch later this year allowing them to showcase highlights of their blossoming back catalogue along with their newest productions in a stunning interchangeable live format. Stay tuned…