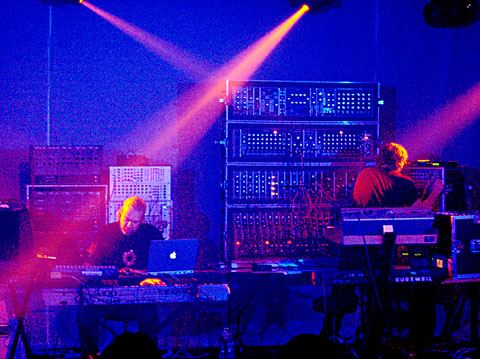 There are at least 13 artists with the name Arc
0. A heavy/melodic prog band from the UK who released the critically acclaimed album At This in 1971.
1. The most profilic would be the Toronto-based experimental ambient trio of Aidan Baker (Nadja) (guitars, woodwinds, voices), Richard Baker (drumset, emboura, percussion), and Christopher Kukiel (djembe, tabla, dumbec, percussion). Over 14 releases are out.
2. Nu Jazz duo Dean Smith and Darren Knott (a producer associated with Coldcut) whose track Arcane appeared on Ninja Tune's Xen Cuts compilation.
3. ARC is the recording alias of electronica staples Mark Shreeve and DiN label boss Ian Boddy, a duo who have been working together for almost a decade. The two producers bring very different elements to the table: Boddy mans all things digital, running a variety of synthesizers in conjunction with software, while Shreeve brings an analogue presence, sequencing via a vast Moog Modular system.
4. A Japanese visual kei band (alternate tag: Ａｒｃ), formed in 2003 and signed to UNDER CODE PRODUCTION. Members are: Ko~Ji (Vo.), Yuki (Gu.), Toshiya (Ba.), Shun (Dr.)
At their December 18th live, Arc announced that, after 7 years of activity, they will be disbanding in March of 2011.
5. A legendary act of the NWOBHM era. The band released one 7'' single in 1980, Tribute, and another one 1981, War of the Ring.
6. The musical project of Rich "Lowtax" Kyanka of somethingawful.com fame, under which he creates "dark, industrial techno". He has released two albums, "Drain", and "Rusted Scenery", distributed directly from somethingawful.com.
7. A collaborative project between Taylor Deupree and Savvas Ysatis. Two albums have been released under the name Arc: 1996's 12K, which Deupree would later name his own label after, released on the Radical Ambient label, and a split album with Tiny Objects in Space, a solo alias of Deupree, released on the 12k label in 1997.
8. Arc is an improvising string trio formed in 1988, featuring Sylvia Hallett on violin, electronics and voice, Danny Kingshill on cello and voice, and Gus Garside on double-bass and electronics. The trio has released three albums: Remembering in 1992, Out of Amber in 1993, and The Pursuit of Happiness in 2009.
9. ARC was an experimental rock band out of Downers Grove, Illinois. Their releases range from 2004-2006. Band members included: Sly Q. Jones, Sir Francis von Lemonjello, Burt Bannister, and Gary Bossanova. Various spin-offs include Science Ninja Team and Asthmatic MCs.
10. An indie rock band active in Oxford c.1992-93: they produced two demo tapes, "Oil and Water" and "Senses." In a fit of boredom their bassist later produced a CD of remixes "Oily Warthog."
11. "Arc" was created around 2006-2007 by Artificial Dreamer (Jimmy Batista) & Douglas Hazelwood. They released their first release on Neuroscience Recordings entitled "Scrunchies", and build there unique style onto there second ep with a track called "Limin". Everything after Limin continued to build the future for Arc and in the Summer of 2008, they launched "Dangerbox Recordings." Aside from them releasing on their Imprint they had releases lined up, from upcoming talent and production buddies. Dangerbox has made a great impression in todays trance/progressive/electro house scene with big DJ Support from Tiesto, Ferry Corsten, Markus Shultz, Above & Beyond, Mike Shivers, & Ronski Speed to name a few, and still with more to come the label is taking the trance genre and filthing it in a whole new direction. Some of Arc's Productions can vary in style, nothings always the same but its a fresh new melodic sound with a dirty bassline rumbling.
12. ARC is an Experimental/Metal band from Knoxville, Tennessee.