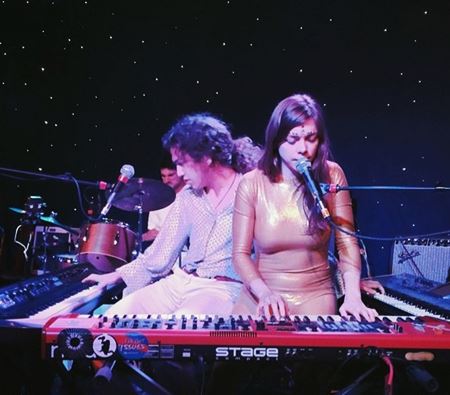 Arc Iris is the new band featuring Jocie Adams, formerly a core member of critically acclaimed folk outfit The Low Anthem. Formed in 2013 after Adams departed The Low Anthem and based in Providence, RI, the group is comprised of a rotating cast of members, including Zach Tenorio-Miller (keys), Ray Belli (drums), Robin Ryczek (cello), Mike Irwin (trumpet), Max Johnson (bass), and Charlie Rose (pedal steel, trombone).
Arc Iris’ influences include music as varied as Crosby, Stills, Nash and Young, Grizzly Bear, Miles Davis, Frederick Chopin, and the Muppets’ Dr. Teeth and the Electric Mayhem. Adams’ unique backround as a classically trained composer, stint as a NASA researcher, and time served on the indie rock circuit, combined with an array of colorful influences executed by masterful players create the genre-bending and original sound heard on Arc Iris’ debut, eponymous record (due April 1st on Anti/Bella Union).
Adams’ early classical training included Brahms (a big repertoire for clarinets - Adams’ first instrument), and the French impressionist composers, but also modernists like Stravinsky. The modernist influence can be heard distinctly in the angular cello that binds the orchestral centerpiece of the album, the 2-part suite “Honor of the Rainbows” (played by the essential Robin Ryczek, who’s day job is running a music school and recording studio in Kabul). But there are touches throughout, and even the vaudevillian stomp “Singing So Sweetly” veers into a vocal breakdown that could come straight out of a Fauré art song.
Arc Iris also features a strong folk and country foundation, developed largely during Adams’ time with The Low Anthem, who shared the stage with artists including Bruce Springsteen, Fleet Foxes, Mumford & Sons, The Avett Brothers, as well as one of Adams’ heroes, Emmylou Harris. Adams writes bluesy country songs that are distinctly Arc Iris: “Whiskey Man” and “Powder Train” may start out as rootsy country songs, but the ambitious arrangements and advanced song structure quickly translate them into something unexpected. Adams is aided immensely here not only by Charlie Rose on the banjo and pedal steel but by her new rhythm section. Max Johnson on upright bass, Ray Belli on drums and Zach Tenorio-Miller on piano have been playing together since high school and cut their teeth at the School of Rock sharing the stage with musicians such as Perry Farrell, Gene Ween, Slash, and Jon Anderson (Yes). Mike Irwin, who’s resume as a trumpet player includes work with TV on the Radio and My Morning Jacket, rounds out the ensemble. Having played extensively with his cousin, Orlando Marín (also known as The Last Mambo King), Irwin brings yet another dimension to the project.
Zach Tenorio-Miller, Adams’ songwriting partner and keyboardist, further expanded Adams’ musical pallet to include a strong 70’s classic rock influence. Adams notes, “I was more immersed in folk and classical music until Zach showed up and saturated my mind with a waterfall of 70's classics.” Inspired by Randy Newman, Harry Nilsson, and Van Dyke Parks, Adams incorporates a wide range of instrumentation and sheer love of classic American song forms into Arc Iris’ music.
In Arc Iris, the shifts between orchesteral sophistication, grimy outlaw country, delicate soulful harmonies and whimsical cabaret pop - sometimes even in the same song are all tied together by the voice and vision of Jocie Adams.
Arc Iris is something new under the sun, a band in the adventurous, ambitious company of other newcomers like Dirty Projectors or St. Vincent, but with deep roots in the musical traditions they meld effortlessly into their music. Perhaps Rolling Stone says it best when they describe her deft abillity to play with these contradictions when they describe Adams’ performance as “demonstrating how to play without replicating, how to pay tribute without ripping off and how to honor something old by making it something new.”