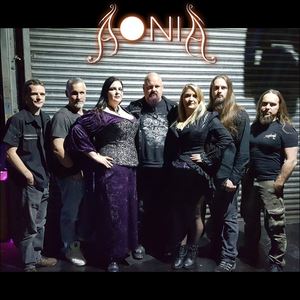 Be mused! For bookings, please contact enquiries@aonia.co.uk - for purchase info, please visit http://www.aonia.co.uk/
Aonia released their second EP, 'Sunchaser', on July 25th, 2014. The addition of a second operatically trained vocalist and full, orchestrated, more technical keyboards give more depth and create an intricate tapestry of sound and the band is excited to capture the magic produced live in CD form.
Pagan Hel Reviews has this to say about 'Sunchaser': "The rhythms are punchy and bold and pursues an invigorating encounter with plenty of potently addictive hooks and sumptuous keyboard melodies. The vocals are completed to a high precision assault and very diverse, thrusting out a deep elegance and go all out to tempt and fuel the tracks with resounding urgency!”
You can purchase "Sunchaser" online here - http://www.cdbaby.com/cd/aonia2
You can purchase "City of Shadows" online here - http://www.cdbaby.com/cd/aonia
"Sunchaser" is also available in hard copy from our friends at Paradise Pretty here - http://www.paradisepretty.co.uk/licensed-band-merch/cds/aonia-sunchaser-cd
About Aonia:
“Aonia” is the place near Helicon mountain where the muses dwell. While this image sounds serene, the band’s sound is the polar opposite. Driving, almost thrashy riffs juxtapose against melodic, almost operatic vocals from ‘sopranos with balls’ for a sound that is a blending of the very old and the very new, tempered steel in a velvet glove.
Building on their successes as 2012 Bloodstock Metal to the Masses finalists, Aonia are currently gigging regularly, securing support slots at more well-known venues and in more high profile festivals. For example, the band has played ‘Metal Rites Festival’ 'Martin Walkyier's Viking Funeral' 'Whitby Goth Weekend', 'Metieval Summerfest' and 'Warhorns Winter Festival'. The band provided main support at Dovestock and headlined the Fringe stage of the Doncaster Live Festival. Most recently, they supported Canadian power metallers and Bloodstock veterans Kobra and the Lotus at the Corporation in Sheffield.
Rising phoenix-like from the ashes of the band 'Cathexis', Aonia was formed by drummer Tony Gaskell and vocalist Melissa Adams. James (guitar) joined soon after. Gary (bass) joined the band in January of 2012 and Przemek 'Slick' Druzkowski (guitar) joined in February of 2013. In mid-April of 2013 the band decided to add a second vocalist, Joanne Robinson - another operatically trained colorartura soprano - to the line-up, to further differentiate themselves from the rest of the metal world. And then there were seven - in May of 2013, Tim 'The Machine' Hall, with 20 years of gigging experience, joined on keyboards, giving the band a fuller, more epic sound. With seven musicians, the scope has further widened to construct complex compositions and intricate tapestries of sound.
The band has had numerous successes, appearing in Metalhammer magazine, Terrorizer magazine, Alternative Female Voice magazine, Dominator Magazine and Bitchslap Alternative Fanzine. Aonia has been band of the month for Valkyrian Music, The Moshville Times and Alternative Voice, as well as band of the day for Lizard King Music and Ginger Squirrel Music. They have also reached #9 on John's Rock Show on Birmingham City Radio.
In December 2011, Aonia released its debut EP 'City of Shadows' to critical acclaim. They quickly followed this success with the filming of their debut video 'Gift of the Curse', which was released in March, 2012.
Aonia has been lucky enough to share the stage with some amazing bands, including The Shiver, Skyclad, Warrior Soul, Northern Oak, Skarlett Riot, Kobra and the Lotus, Ravenage and Stormborn.
Aonia has been compared to artists like Therion, Avantasia, Nightwish, Within Temptation, Epica, ReVamp, After Forever, Leaves Eyes, Delain and Tarja.