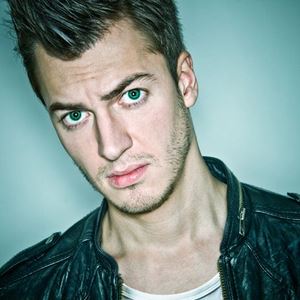 While other guys were playing football and picking up girls, 13-year-old Gábor Baki was sitting at home in front of his computer. After playing a lot with strategy and shoot 'em up games he discovered a program called Impulse Tracker. Making music was fun for him, but deep inside he hoped he would get on better once.
He started to make kind of hybrid tracks, and whatever he liked. Thanks to his sound technician father and his father's friends, he got into techno and house music at a very young age, so the first impressions came from the living room.
His first track was released at the age of 15 on a Hungarian compilation. The passion of making music got him even more, so he released his first own record. That time he was doing house music, so it's not surprising that it came out on Dutch label Work White which is a sublabel of Olav Basoski's Work label. This was followed by a remix on other sublabel Work deLuxe, before heading to a new direction that is called progressive house.
He fell in love with a track called Rotor by Darko, so he sent his first proggie tracks to the label, it was released on. At still the age of 17, he managed to sign a record deal with Mechanism, sublabel of Sumsonic. After that he did several remixes, he reworked a Pashka track for Mechanism, then Fingerfest Inc. - Autoporno and De Loren & Colors - Nanga for Pornostar, and Blast Furnace vs Lynx - New beginnings for Gravitation.
Being fed up with remixes his own productions followed again: he released Allnighter (which was played twice by Stefano Greppi in a guest mix for John Digweed's Kiss FM show) and Solaris on Cyber Records, Space with a Sterio and McGrath remix on Nascent, What a soul on a Hungarian compilation, and Invisible and Soulfly on Cyber again. This record was the end of his dark period, his tracks started to become happier and more melodic, as he got to know the softwares he used better.
Sometimes he likes to create music with his friends, the ones he did with Snake Sedrick - Liquid State and Solid State - came out on Screen Records, and even John Digweed played it on his Kiss FM show. The two producers have different styles, so when they make something together, they create a new style.
In the summer of 2004 Andro did a huge step towards his dreams and becoming famous when he created his remix of Pink Floyd - Another Brick In The Wall. After Satoshi Tomiie hammering it, the track was played by almost everyone. He signed his track Retroid to Baroque, and released Monkey Lover on Method Records which reached number 2 on top 40 Balance Promote Chart.
After several other remixes, he won a Karanyi (Hungarian pop band) remix contest, and was voted for best Hungarian producer and also the newcomer of 2005. His Nature Wakes remix reached #1 on Hungarian Radio Deejay chart, and he launched a mutual show with his friends Snake Sedrick and Yvel & Tristan on Proton Radio, called Indigo.
Being a dj he had many gigs in Hungary. His actual dj sets include house and electro with breaks, and he is lucky enough to play many tracks long before they are released, not mentioning his own, sometimes unfinished tracks. So its not surprising he prefers playing cds.
As a university college student its hard to share his energy and time, as he is often busy with school. He likes to make music at home in silence, which usually doesn't work, as his brother is a member of a metal band, so you can hear many styles when you enter the house. However, being only 22 years old he still uses the same set for producing - one computer - and still has plenty to offer.
Djs, who have played or charted Andro's tracks: Sasha, John Digweed, Deep Dish, Satoshi Tomiie, Paul van Dyk, Desyn Masiello, Anthony Pappa, Nick Warren, Hernan Cattaneo, Sander Kleinenberg, Adam Freeland, Evil 9, Pete Tong, Chris Fortier, Max Graham, Sultan, Moshic, The Low End Specialists, Stefano Greppi, Shiloh, Greg Benz, Hector Romero, Behrouz, Saeed & Palash.