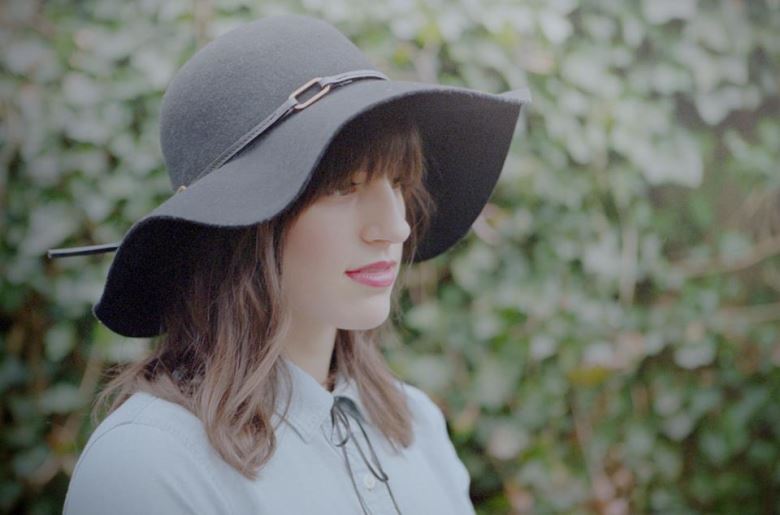 “Can I tell you a story that made me who I am?” Alva Leigh sings on her debut album.
From a 22-year old piano-playing singer-songwriter, this lyrical question might lead you to expect the expected – candlelit confessions and dear diary entries, all about love lost, found and unrequited.
But Leigh’s answer is much more compelling.
Over ten songs that take on subjects from travel to natural disaster to death, she offers glimpses into her heart and soul through puzzle pieces and striking poetic fragments. The crumpled map of an ex-lover’s face. A steeple of ash in the rain. The heart that explodes like a red, white and blue firework display. A pig in heaven, grunting a secret life.
Leigh isn’t being purposefully cryptic or elusive. It’s just that she believes in the power of music to bring out shadows and light, and ultimately, a truth that’s somehow bigger than what resides in the words of a song.
“That’s what made me fall in love with songs,” she says. “When I first heard how lyrics and sound could come together to make something more than their separate parts. Something that can change you. It’s almost like a different language. Joni Mitchell’s Blue was like that for me. That record changed my life.”
And it isn’t just the Joni Mitchells and Paul Simons who light her creative fire. A self-described “bookworm,” Leigh says, “I get very excited about beautiful moments in books. Whenever I find a great image in a story or a poem, it sticks with me. And I find that it will jump out of the story in the book and into my own story.”
Born and raised in Gulfport, MS, Alva Leigh (her friends call her Allie) learned to play piano by ear. As a teen, she discovered “by accident that I could carry a tune.” Writing songs wasn’t far behind. After a few years of casual gigging in coffee houses and at church gatherings, Leigh set her sights on Nashville.
Her move in the summer of 2005 came ten days before Hurricane Katrina hit. Leigh says, “Gulfport is about an hour east of New Orleans. We had seven feet of water in our house. Our phones went out for three months. And when it hit, I was sitting in the cafeteria at Belmont University by myself, watching these terrible images on CNN. It was weird not to be there. I had to grieve from far away. My stuff was gone, so what was displaced was all of my memories. And displaced is not even a strong enough word.”
Leigh pours those feelings into “Hurricane,” one of the album’s standout tracks. With an arrangement that captures the jaunty defiance and brassy sobs of a Big Easy jazz funeral procession, the song shuffles and swings as she sings of such powerful images as “a cottonmouth sunnin’ on her back porch” and “watching her family wade for my momma’s wedding gown.”
Leigh says that songs like that would not have been possible without her producer John Painter (Ben Folds Five, Sixpence None The Richer). She recalls, “It’s funny, when we met, I was scheduled to go into the studio with another producer. Then I played John a few songs, and he said, ‘We could just record one song and see what happens.’”
What happened was a two-year explosion of creativity and collaboration. “All of a sudden, I felt really inspired and I was writing new songs,” Leigh says. “Our personalities meshed, even though we’re opposites. I live by a planner. John is extremely laid back. And he’s also amazingly talented. He has a lot of different instruments in his studio, and he can play them all. I would say, ‘This song would be really cool with . . .” Then he’d say, ‘Theremin.’ It was like playing musical Mad Libs. And there was always space for me to help with production and give ideas. It was easy and fun.”
That spirit is in bountiful supply throughout the album. From the telegraph-tap verses and swooning chorus of “The Road” and the Kate Bush-influenced “Fire In Your Belly” through the sparkling ‘60s girl group bounce of “Skyline” to the gently soulful “Calling Me” and spooky spin of “Scoundrel,” Leigh’s debut is a feast for the ears.
But she and Painter never err on the side of excess, serving up tasteful arrangements that always highlight the song and the singer. Leigh explains, “The records that I love are the ones that are about a person’s voice. When a vocal is big in the mix, that’s the sound I love. And John and I talked about that a lot. We kept the mixes simple, so that my voice is front and center.”
And indeed, Leigh’s voice shines throughout. Not a singer who’s bent on oxygen-defying held notes or the conquest of octaves, she has a clover honey tone and an appealing confidential air about her delivery, as if she’s sharing secrets, letting us in on vital bits of information about her life.
As she prepares to take her songs on the road, Leigh says she’d like the album to be “the start of a long conversation between myself and listeners.”
“I hope it will encourage people to look at their own lives and surroundings and the images that they see every day, with more awareness and a renewed appreciation of beauty. It’s hard to encourage people to do that by being direct. But when you hear a good song, with a striking image that you can unpack and take with you and contemplate, it can inspire you in your own life. I don’t know if I can do that, but that’s what I aim for.”
Biography by Bill DeMain (featured music writer for MOJO, Performing Songwriter, Musician, Mental Floss, Entertainment Weekly)