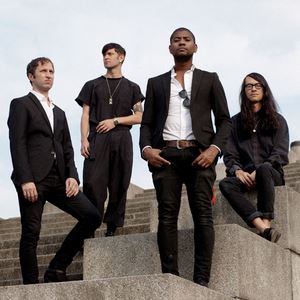 There are at least three artists which use the Algiers name:
1. Algiers - Not so much a country but a place. Algiers are two, spawned from two groups of more, born in Sheffield with roots which extend to Manchester and Middlesbrough.
Both on hiatus from their older musical ventures, John and William enrolled to study at university in Sheffield. A chance meeting in May 2011 led to one rehearsal which turned into 4 months of collaboration.
It would be churlish to say they’ve cherry picked the best parts of post punk pop from the last ten years. What they’ve amalgamated from their influences is something both heady and visceral. A sound that feels weightless and timeless. Reference points are far and wide with some already likening the wandering guitars and heart on sleeve vocals to everyone from Phoenix to Death Cab.
But there’s much more to these two. The ‘Four Priests’ EP is the culmination of a few months in a rehearsal room which now serves notice for something much more ; Bright futures and even brighter melodies.
www.facebook.com/wearealgiers
www.soundcloud.com/wearealgiers
_______________________________________________________________
2. Algiers is a band of musicians born in Atlanta, Georgia, the rotten hub of the Ol’ American South, where W.E.B. Dubois once saw a riot goin’ on, and where the hell and highwater swirls ‘round to the knees.
Holed up in our perches in London, New York, and a small town in France, plague up to our necks, we conjure the dead sound to life.
The click clack of the keyboard brings us to worship. The shrieks of slaves and rebels pummeling through.
Our tongues, twisted in the service of Paul Robeson, Lee Moses, Selda Bağcan, et al, slur a call in the darkness.
Algiers is the experimental gospel noise soul pulp response, slurping Francophilia - Gainsbourg and Dutronc, Saint Just and Fanon, Badiou and Baudrillard - Black Power - Nina Simone, Public Enemy, James Baldwin, Fred Hampton, DJ Premier, and Fela Kuti - and Southern Gothic - William Faulkner, Nick Cave, and Flannery O’Connor - into a stew thicker than bourguignon in the Algerian sun.
Algiers is:
Franklin James Fisher (b. North Carolina, l. NYC) / vocals, guitar, keys, programming, and percussion
Ryan Mahan (b. Georgia, l. London) / vocals, bass, and percussion
Lee Tesche (b. Georgia, l. London) / guitar, vocals, programming, and percussion
http://algierstheband.com/
https://twitter.com/algiersmusic
https://www.facebook.com/Algierstheband
_______________________________________________________________
3. Algiers - is an avant-drone, experimental noise, tape manipulation, occultronics, tape music project started by Levi Berner of Portland, Oregon - USofA, who began recording as Algiers in 2007 with the release of his "Bleak Village" cassette album and Ground Tissues split release.
Berner also works under his own name as well as in or as the projects Witches, Visible/Invisible Wall and the Ratface "Salton Sea" releases in collaboration with the good folks at Basement Tapes.
http://www.discogs.com/artist/Algiers